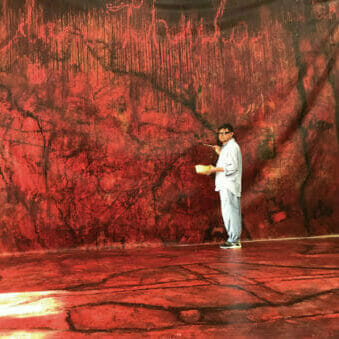 Sergio Hernández (b. 1957, Huajuapan de León, Oaxaca, México) is among the leading contemporary Mexican artists today and is currently based in Oaxaca in southern Mexico. After completing his studies at the Instituto Nacional de Bellas Artes in Mexico City, Hernández gained international recognition after exhibiting his work in France, Italy, Germany, and Spain. His iconography often reflects his own Indigenous heritage, and that of his native region of Oaxaca, including the Zapotec and Mixtec cultures of Mesoamerica. He also focuses on the wonders of the natural world, including native species of southern Mexico, the Pacific Ocean, and constellations of the night sky. Hernández’s printmaking—following in the tradition of fellow Oaxaqueños Rufino Tamayo and Francisco Toledo, and his use of local materials such as cochineal (the beetle-based red pigment developed before the Spanish conquest by Indigenous Zapotec artists and subsequently exported around the world as the “perfect” red), tie his art-making practice to important local and Indigenous traditions.