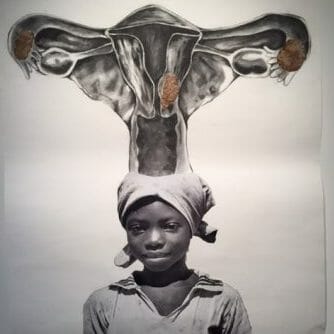 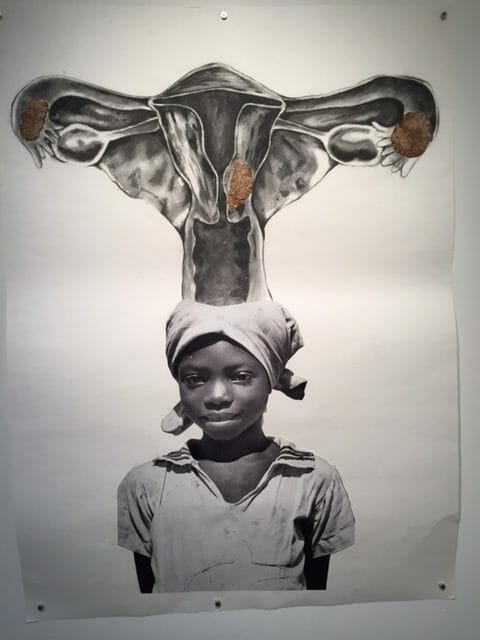 Impressions: African American Artists and Their Connection to African Art

The Impressions exhibition is the result of a collaboration between Gallery Director, Alessandra Moctezuma and Art Historian, Dr. Denise Rogers, who manages the 900 piece African Art Collection at San Diego Mesa College.  Moctezuma and Rogers selected three prominent contemporary African-American artists to engage audiences in a visual conversation between selected artworks in the collection and the works of artists Andrea Chung, Kenyatta A.C. Hinkle, and Robert Pruitt.

Chung, whose work focuses primarily on Carribean island nations, how outsiders perceive these islands in contrast to the ‘real’ lives of the inhabitants,  and migration and labor issues stemming from colonial and postcolonial influences. Her work which is expressed via appropriated images from historical documents are collages about African American women’s’ labor, and midwifery. Chung uses the image of the uterus as a metaphor for the perceived value placed on women in Carribean cultures together with the land, to elicit narratives for the viewer to interpret for themselves.

Hinkle’s work also uses the female form to challenge some of the notions of African-American women on questions of race, sexuality, and history. Some of the abstractly drawn ink and mixed media works are rooted in the figure of historical female  Tituba, who was accused of witchcraft in Salem Massachusetts and was arrested in 1692. Hinkle’s works which examine the perceptions of the black female body, also include a video performance piece as well as a series of small collage works that use reproductions of antique photographs of African women, which Hinkle transforms with ink, paint, and glitter.

Pruitt’s large figurative works on paper and small sculptures use imagery from science fiction, images from the history of political and social struggles in the U.S. and the complexities of the contemporary black identity. There is also imagery of pre-colonial Africa as he dresses his figurative drawings in headdresses, and appropriates primitive figures, covers them with aluminum foil and transforms them into futuristic-looking sculptural forms. This provocative exhibition is chock full of narratives from the points of view of three mixed-media conceptual artists whose works are richly developed and realized, juxtaposed with masks and small sculptures from the African American Art Collection.

The exhibition is on view through March 1st.
Click HERE for more information.