Slow It Down, Big Guy! by Duke Windsor 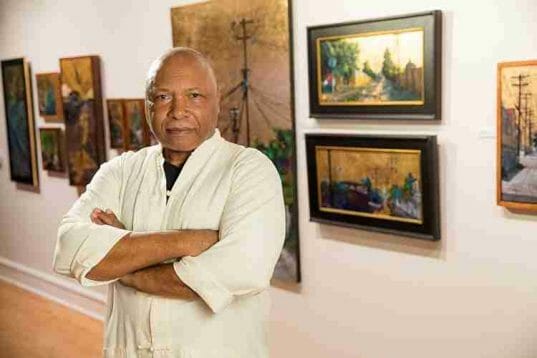 Windsor began working in the museum industry in 2001, starting with the San Diego Museum of Art as an exhibit preparator’s apprentice. He learned about budgeting, creating, planning, and installing many exhibitions through the years for over 15 years.  He has worked as a preparator, construction shop foreman, Traveling Exhibitions Coordinator, and Director of Exhibit with the Museum of US, Mingei Museum, Museum of Photographic Arts, The Timken Museum, and as the founding Director of Exhibits for the highly successful n historic naval ships, the USS Midway Museum. In 2015, Windsor left for the private sector and developed the CAD Engineering Department for Full Swing Golf, Inc.

As a fine artist, Windsor opened his first art studio in the Gaslamp Quarter in 1994. Since then, he has artistically explored a wide range of subjects. Windsor’s Urban-Scapes have been exhibited and received awards at numerous juried exhibitions, group shows, and corporate venues in San Diego and Southern California. His paintings are in many private collections throughout the US and Europe.  Windsor is an Associate Artist member of the California Art Club, Oil Painters of America, International Acrylic Painters Association, San Diego Watercolor Society, and Foothills Art Association. Windsor is former Education Chair of the San Diego Museum of Art Artist Guild and has also served as a member of the Public Arts Selection Committee of the San Diego Regional Airport Authority Art Program. With over 15 years of museum exhibit design experience, Windsor has juried many local and regional art exhibitions.

Windsor’s art studio has been located at his Mt.Helix, California home since 2015.

See more of his work at www.dukewindsor.com