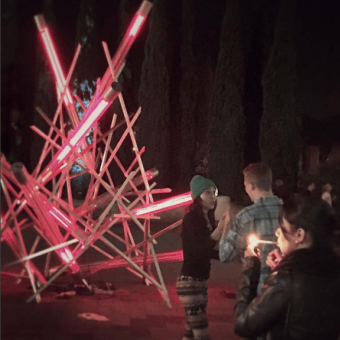 San Diego is having a good run this weekend. Nice weather is on tap, and what better backdrop for an extensive art-filled weekend with Art San Diego, scheduled into Balboa Park starting Thursday and running through what may well be a sunny Sunday, November 6?

This year’s theme, appropriately enough, is “Threshold,” loosely explained as being on the brink of something extraordinary and ever evolving. It’s a supple theme, addressing, as Berchtold points out not only contemporary art practices, but also larger social concerns such as the San Diego-Tijuana Border region and issues raised during the 2016 Presidential election campaign.

Berchtold is particularly excited about the Art Lab “exhibit,” the Open Walls Project she is curating with San Diego and Tijuana-based artist Marcos Ramirez Erre.  Now in its third year, the Open Walls Project takes public art to billboards across San Diego, with the intent of intriguing, amusing, and inspiring anyone who looks up in their direction.

This year, 10 billboards with designs by internationally known artists such as Andrea Bowers and Daniel Guzman as well as Ramirez Erre, engage current issues such as immigration, deportation, and police brutality from North Park to the border.

Art Lab also has four other site-specific projects ranging from a collaborative exploration of migration and movement with Hugo Crosthwaite (visual art), Marilu Salinas (violin) and Theresa Magaro (Butoh dance) to a light installation by Adrian Sierra Garcia to a booth of work by San Diego Art Prize winners from the San Diego Art Institute. The booth, curated by budding curators from Alessandra Moctezuma’s Museum Studies Program at Mesa College, features work by up and coming local artists such as Margaret Noble, Bhavna Mehta and Anna Stump. One section of the booth is devoted to the 2016 San Diego Art Prize winners William Feeney and Shinpei Takeda who recently collaborated with the AjA Project and The New Americans Museum (“Inscription”).

Although Opening Night is really reserved for collectors and by invitation only, the rest of Art San Diego is open to the public. In addition to live demonstrations, art talks are scheduled throughout the event touching on authenticating art to what pushes painters to paint to how to start an art collection.

Event goers can also roam the more than 50 booths hosted by local and out of town dealers alike. Local dealer Alexander Salazar will be debuting several new artists such as Iraqi émigré Qais Al Sindy and the LaunchPad Program, which provides exposure to emerging, underrepresented artists, will feature multimedia artist, Stephanie Byrd.

Art San Diego runs through Sunday, November 6, starting at 12 pm. Admission ranges from a four day pass ($75 online/$85 Door) to general admissions between $25 online to $30 at the door.