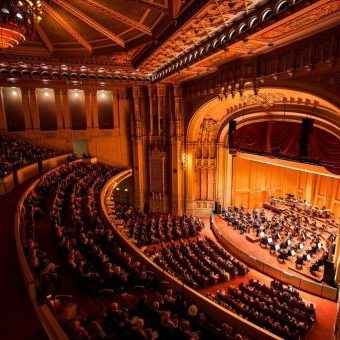 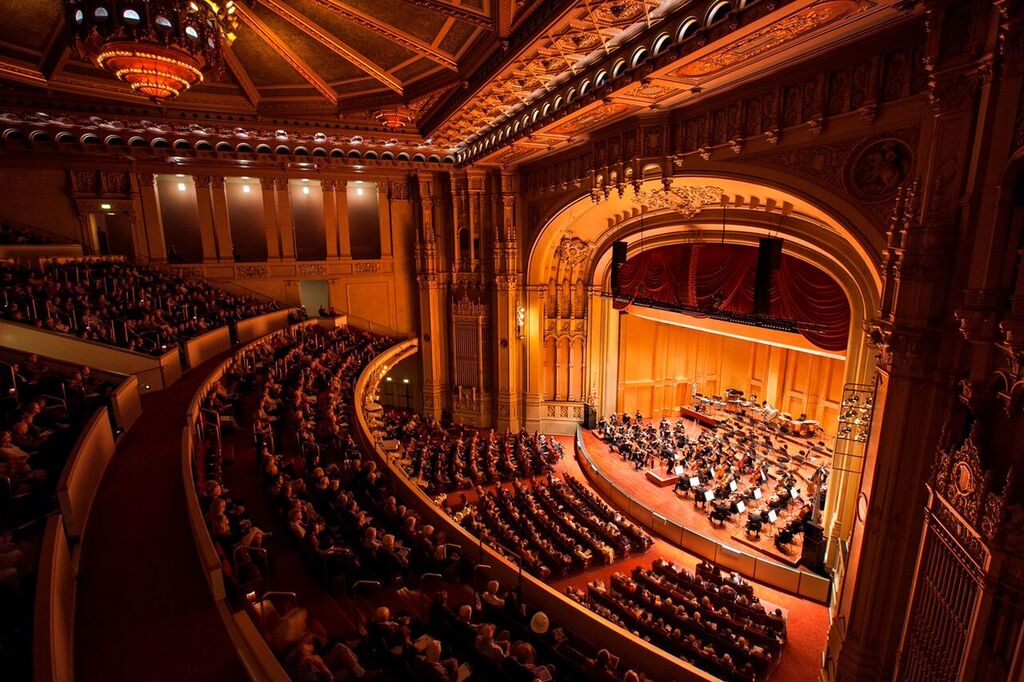 My shiny patents tapped across the sidewalk as I made my way to San Diego Symphony Hall.  Special occasion soles and uppers, elevating me for the San Diego Symphony Season Opening Gala.  My tux was a little tight from years of growing into it, bought a little large long ago so I could wear it forever. It’s an Armani Classic, for crying out loud. Figured that by walking fast, I could shrink back into it by the time I hit the door.  No sweat, threads rumpled a bit, but a smartly dressed man at the gate.
.
Symphony Hall throbbed with anticipation. Inside, the will of the crowd beckoned me towards the champagne, the aficionados, and the heartbeat of San Diego’s cultural season. Posh, populist and polished, this was an audience for all seasons, all reasons, and it all rhymed, from prols to pros, toddlers to tiaras, minors to majors, all vibing to the beat of R-X-3, sweet and jazzy combo tuning us up for the big show in the big hall.  Kids dancing, grownups wishing they still could, everybody vogueing, each to their own tune.  Who were those statuesque twin ladies, all velvety gowned and joined at the hip all evening? They were definitely trending. This was classical gas gone democratic like no other musical event could match.  I bumped into the Mayor, outshined only by his First Lady, so pretty in pink, so close to the musical mob, so San Diego.
.
Along the way, on a whim, I asked some attendees,  “When did you first hear classical music?”  Most started young, before even knowing what classical music was, on the radio, in the movies, on a school trip, in school, at the symphony with Mom.  Many said, “my Mom made me.”  A young lady from Russia said, “the government made me.”  Best response: A boyish gentleman mused, “In my Mummy’s tummy.”  The Mayor, Mom in hand, began listening as a boy at a performance of Holst’s “The Planets.”  None knew it at the time, but they were addicted at first touch and, like me, realized they had been listening all their lives, the masters ghosting behind the curtain at every rock concert, club show, musical mash-up they had ever heard.
.
In my seat, I wondered, “What is classical music but a big bang of heavenly energy rendered from generations of gypsies, troubadours and minstrels, buried in the earth of their ancestors, waiting for resurrection in a hall of wonders, at the hands of magicians killing time and place in the now of melody, pace and presence?”  Then, bam, the Star Spangled Banner brought me to my feet and before I could open my program, Liszt quelled the cheering listeners.  Guest pianist Jean-Yves Thibaudet shredded the “Piano Concerto No. 2 in A Major,” often rising off his bench to deliver a pummeling to the keys that brought the audience to its feet. Conductor Edo de Waart commanded the soaring muse in a delirious debut and took complete command for Strauss’ “Ein Heledenleben, Op. 40.” When he lowered his baton, we knew it was a stellar start to a season now made even more highly anticipated.
.
Entitled “A Hero’s Life,”  the San Diego Symphony’s kickoff concert lived up to the billing as everybody performed heroically. Riding the elevator up to the after party atop the University Club, I felt in flight, with no need of mechanical elevation. Bands of tuxedoed gentlemen and elegant ladies floated by like notes, right off the page. Gentlemen snapped their suspenders and ladies snapped the gents to attention. Scat-singing and dance music wafted by, in a venue blessed with a view of San Diego to die for.  High above it all, we were heroes, just for one night.
.
October offers a champion of the Jacobs Masterworks series – ‘Romance, Mystery, Marsalis,’ family concert – ‘1001 Symphonic Tales’ and the first film series concert of the 17-18 season – ‘Ratatouille’. November starts off with one of the most entertaining pop music voices of the last 50 years, Patti Austin, who tore down the house at last season’s OPUS Gala opening. ‘The First Lady of Song: An Ella Fitzgerald Tribute’ concert will launch the Jazz @ The Jacobs 2017-18 series, again curated by San Diego-based jazz legend Gilbert Castellanos, and there’s a Jacobs Masterworks highlight you don’t want to miss, ‘Mozart’s Requiem.’
.
To view the full season calendar and to purchase tickets CLICK HERE
–
Your Vagabond Bon Vivant
Philly Joe Swendoza