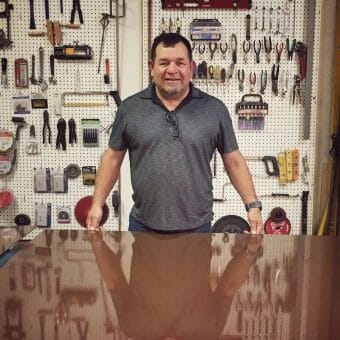 Marcos Ramirez, known as ERRE, was born in Tijuana and is best known for his provocative and political works that weigh in on subjects such as border issues, colonialism and government corruption, to name a few. His arguments on social issues are shrewd and precise, his word craft exacting.  ERRE’s two decades as a construction worker combined with a law degree yields a man who can work with his hands as well as his mind to create pieces that he hopes will stimulate the intellect and inspire the viewer to dig deeper into the issue he has set forth. Looking around his studio, one finds a collection of tools and equipment for manipulating a vast array of materials, allowing him to not only imbue the work with meaning but also to apply himself to the painstaking process of producing a polished piece of work.

One of his most famous pieces is Toy an Horse, 1997, a 37-foot double-headed Trojan horse that straddled the US-Mexican border crossing at San Ysidro. A piece about invasion—pulling from both ancient history and our current, shared border history—the poetically political work placed Erre firmly on the international stage. To date he has shown his work in dozens of international exhibitions, installations, and biennials from here to China.  He has exhibited alongside the likes of activist artist Ai Weiwei and even had his work censured and “exhibited” in a parking garage for touching on political issues in Russia.

As is common in most artists’ studios, especially those of artists who work in such large scale, there are pieces of old work stashed everywhere, layered on shelves and leaning against free walls. Every inch of the space is taken up with something for the future, mixed in with bits and pieces from the past. As I take in the details of his studio the unmistakable head of the Trojan horse catches my eye. This not-so-small wooden treasure, stacked together with a ladder and scrap plywood, fascinates me with its unassuming resting place. But that is the artist’s way. The future is more important than the past, especially for an artist as prolific as Erre. As he turns away from the huge horse’s head to walk into the next room, he smiles mischievously; “Who invaded who?”

Next he shows me aluminum panels newly painted brown to look like the American roadside signs that designate historical points of interest for tourists. This new project was inspired by a trip he took for a different collaborative project with artist David Taylor in 2014, called DeLIMITations, that opens at the MCASD July 21st through Nov. 27th. The project took the two artists across the Southwest marking the border between the US territories and Mexico where it stood in 1821, the year Mexico claimed its independence from Spain. After the Mexican-American War (1846-48), this area spanning parts of present-day California, Arizona and New Mexico would be ceded to the US. The artists drove over 2,000 miles to place forty-seven obelisk markers delineating the historical border. Doing so required asking permission of ranchers and landowners—being met sometimes with interest, sometimes with scorn. Erre points out the official-looking van in which they drove the route, now parked in his studio and painted white and emblazoned with the words “Binational Commission of Historical and Geographical Borders.” He laughs congenially; “We were symbolically taking it back.”

During that trip he came across the brown signs for tourists that he felt sterilized the historical events they depicted. Several of the signs were outdated and entertainingly ridiculous. His new project will depict these signs with more accurate accounts of history and tongue-in-cheek renditions of the events they commemorate. No words had been applied to the signs at the time of my visit, but if his previous work is any indicator, it would be safe to say—be prepared for cutting political commentary.

To get more acquainted with the range of Erre’s work please visit his website at: http://marcosramirezerre.com