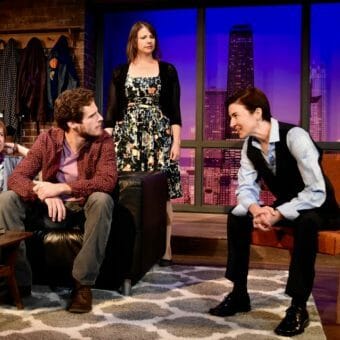 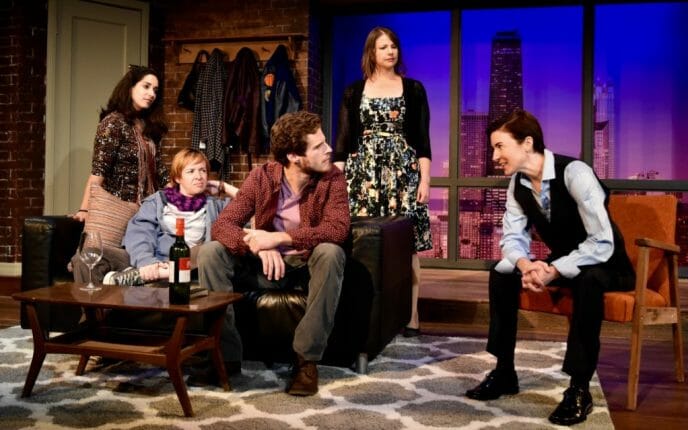 (All) in the Family: The Kid Thing at Moxie Theatre

Expertly directed by Kym Pappas, The Moxie Theatre’s production of The Kid Thing is as exigent as it is engaging. The cast and crew bring Sarah Gubbins’ 2011 play to life thought, care, and an adult-sized serving of humor.

Centered on the lives—and life choices—of two thirty-something queer couples in Chicago in 2009 (i.e. five years before same-sex marriage became legal in Illinois and six years before SCOTUS legalized same-sex marriage by finding state-level bans unconstitutional). The Kid Thing is a poignant and compelling dramedy immersed in a backdrop of heteronormativity. Each character embodies queerness in a different way, advancing a spectrum-based approach to sexuality and gender performance. While contemplating the many iterations of family, they experiment with different methods of holding space for themselves and of taking up space as themselves; sometimes with each other, sometimes in spite of each other.

The script demands a wide range from its actresses as one might expect given the content, and each one greets the challenge with monolithic talent. The play’s engine runs on a steady stream of laugh out loud moments spread out between each character, but perhaps none more than Katherine Harroff’s interpretation of the guileless tomboy and soon-to-be parent, Nate. Harroff, whom some of you may be familiar with from her work as Artistic Director at Circle circle dot dot, is deftly funny not only because she says funny things (which she does) but also because she has that elusive comic ability to say things in a funny way. I’ll spare you the spoilers, suffice it to say that Harroff gives Nate’s laissez faire approach to life a surprisingly deep and deliberate tenor.

Anna Rebek is effortlessly commanding as Margot, Nate’s wife, and her bright and incisive banter matches that of the opinionated and outspoken Darcy, played by Jo Anne Glover (back to her in a minute). Rebek-as-Margot embodies that one college professor we all remember fondly: she’s ferociously intelligent, impressively patient, and more than a little resigned.

Leigh (Sarah Karpicus), is Darcy’s wife and a femme, like Margot. It’s worth noting that while each couple is a feminine and masculine pair, they manage to avoid many other stereotypical homonormative trappings. Case in point: traits typically associated with masculinity and femininity are distributed to each character to different degrees. Karpicus imbues Leigh with the unavoidable tension inherent in loving a dogmatic yet well-intentioned partner, and while I admit that I found myself thinking, “Grrrl, dump her,” I also couldn’t help but find Glover’s portrayal of Darcy endearing. It’s not just the dry wit—something about Darcy made her likable even while I mentally tried to break her and Leigh up. Glover brings the smug butch dominance with Darcy, yet slowly exposes traces of vulnerability throughout.

Connor Sullivan as sperm donor Jacob is exactly as awkward and comical as one would hope. His sincerity and integrity makes for an excellent foil in scenes with Darcy who is all cocky manipulation.

The play is compelling from the moment it begins to the final bow, but the wrenching final scene is perhaps why Gubbins’ play deviates so greatly from familiar stories of same-sex couples and their hypothetical children. In it, a shift takes places that upends the dynamic Darcy has so painstakingly crafted, and the other three are left with the immense task of reacting in appropriately punitive and instructively compassionate ways, which each does to different degrees. The Kid Thing does an excellent job of contending with the fact that LGBTQIA folks are growing up in the same homophobic world as their straight siblings, and of acknowledging the effects that messages of hate have not just on how people are viewed by others, but on how they view themselves.

See it at The Moxie Theater at 6663 El Cajon Blvd through December 11th.
Click HERE for more information.