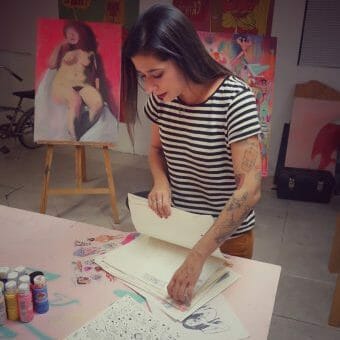 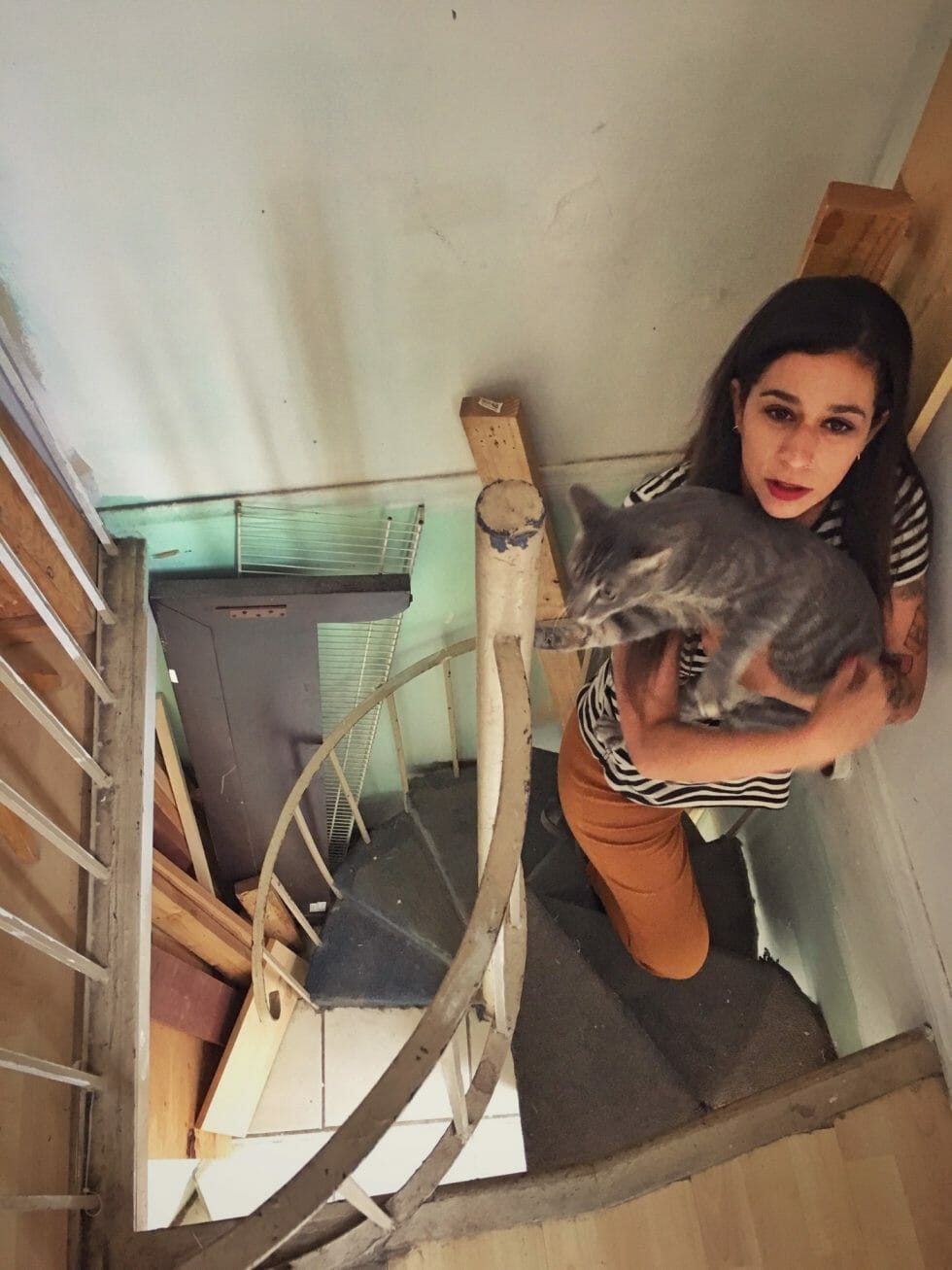 Paola “Panca” Villaseñor leads me down a metal spiral stairway into her basement studio. Painted on the outside patio wall in her trademark neon -pastels, a huge carnival-like face smiles maliciously through the glass door as soft light spills into her studio. Pink in every shade is visible on almost all surfaces. The feminine and playful color set against Panca’s distorted, almost grotesque faces and figures is an effective foil. Her work is not meant to be pretty. It’s meant to show the underbelly and raw side of life; and the heavy use of pink softens the blow, or intensifies it, as in her use of nude figures and misshapen anatomy. Panca, a well-known bi-national muralist, lives in a coastal suburb of Tijuana, and she has painted numerous murals on both sides of the border. Her art has graced the covers of the San Diego Reader and City Beat, and she was nominated as a 2016 San Diego Art Prize Emerging Artist.

A perfect example of Panca’s distinct style is painted on the wall of her studio. A devil cozies up behind a reclining nude female, his oddly elongated arm stretching all the way down the length of her naked body and rests on her inner thigh.  The expression on the woman’s face as she looks at him is more unsure than scared; his eyes roll back in ecstasy as she pets his head, hooking a thumb around a horn. With simple lines and just a few colors, Panca is able to capture that feeling of flirting with an idea that perhaps one shouldn’t be flirting with… I find it remarkable that she has no formal art education, and yet can illustrate a human dilemma using iconographic figures with just a few strokes. The nude female, the devil—we have seen them a million times, but not like this.

“My influences come from going to museums and openings for artists from around here—I’m influenced a lot by that.” She points to a cartoon still from The Ren & Stimpy Show on the wall and says that the cartoon actually have had a big impact on her while she was growing up. We laugh a bit about the crazed -brilliance of Ren and Stimpy, and it’s easy to see a kindred spirit in the everyday-morbid reflected in her work.

In one corner of Panca’s studio a string of Christmas lights hangs above a TV and a wall of VHS tapes. A Peewee Herman doll leans against them along with a kewpie doll and other oddities. She explains that the VHS tapes are part of her creative process. She usually puts on a movie when she sits down to work, taking comfort in the familiarity of a film from her childhood that she has seen a hundred times. As she works, she half pays attention to the movie reel she sees playing in her head. “I put on movies when it’s more lighthearted work, music when I really have to concentrate.”

Her work generally starts with sketches; working ideas out on paper before beginning to paint. She explains that her brother and sister are almost a decade older than her, so she spent a lot of time doodling while sitting at the table with the adults. When she was five years old, an uncle said to her, “You’re an artist…you’re gonna be odd!” “I didn’t understand why he would say that,” Panca says. “It really pissed me off!” We laugh in acknowledgment that her uncle was right; artists can be special in their very own way.

I ask to see her sketchbooks. She pauses, walks over to a corner and pulls back a canvas propped up against random boxes and plastic crates. “This is pretty much it, I just throw them over here,” she says. She grabs a stack of loose papers sliding off the top of a box. She lays a series of sketches out on the table: a skinny muscle man with bright pink underwear and a mustache, a monster eating something, figures talking and walking. I can’t help laughing to myself—what had looked like an unimportant stack of discarded junk was a treasure trove of gems.

We discuss the huge mural she painted over the stairway at the San Diego Art Institute. It took her a week and a half on a scissor lift to paint the mural on the wall some 20 feet in the air. After a few months, it was painted over to make room for the next artist. I ask her if it was hard to see the piece disappear. “I was done with it as soon as I finished painting it. Street art makes you get used to stuff disappearing, so it’s easier.”

As she was painting the mural, a man visiting with his wife became irate about its subject matter: two women eating the limbs of a decapitated female while sitting in a vast pool of blood. He had stormed out, visibly disturbed. Recalling how overwhelming I had found the mural myself, I became steeped in shame, feeling like a simpleton only able to appreciate “nice” art. Having gotten lost in these thoughts, I had to email Panca later to ask for the details of what the man had actually said.

Panca wrote: “He said something like, ‘This is hideous! With so much beauty why would you pick this…’ And I said, ‘Well it’s your opinion, and maybe you were lucky to live such beautiful things, but this represents something that I see coming and also going, like how easily we women can become savages just like men.’ Yes, I honestly wanted to climb down [the scissor lift] and throw a Goya book at him.”

With her email she showed me why she chose to use carnage and I could finally appreciate its meaning. She captured an element of the human condition so vividly, and with a well-placed nod to Goya. I also found it refreshing that she would focus on a sensitive topic in a polarized cultural climate that has little gray area in regard to the sexes. Unconcerned with politically correct rhetoric, Panca opens up the topic for discussion in blatant symbolism, asking us to regard the sexes more equitably, albeit from the underside. In her work, she captures something about the human spirit with the discerning eye of a person who can’t help but notice our quirky human foibles. Her vision is unstifled and unapologetic, and even with its attention to dark details, it still offers hope. 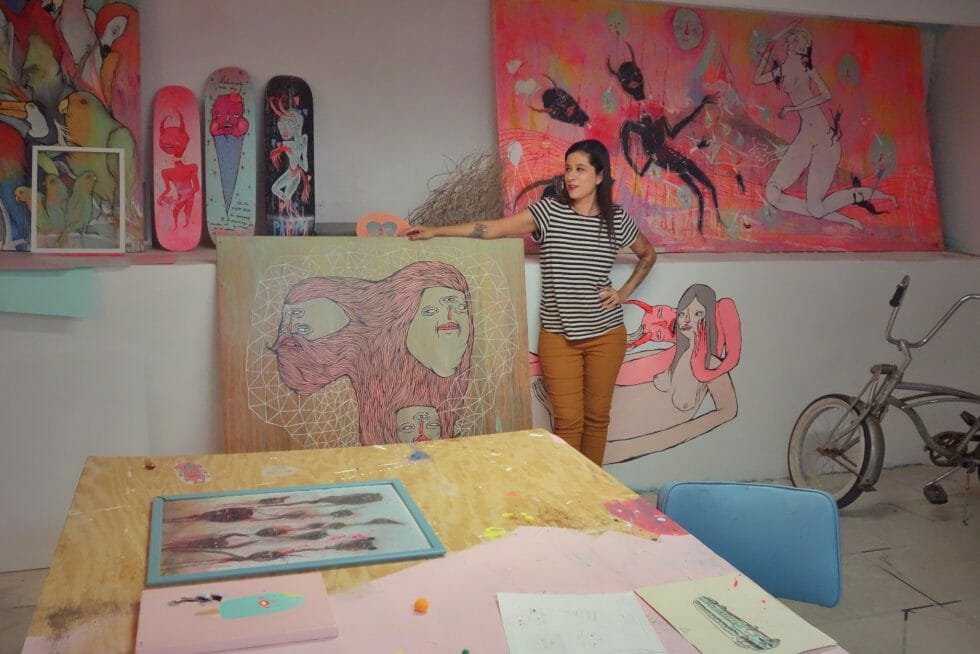 For more info about Panca, please visit her website: http://aypanca.com

Please write the author with any comments, concerns or suggestions: [email protected]