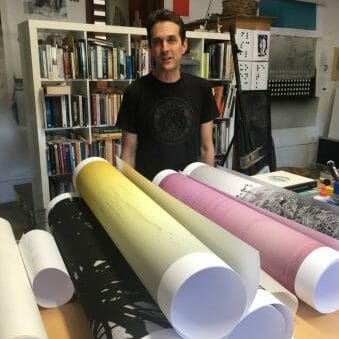 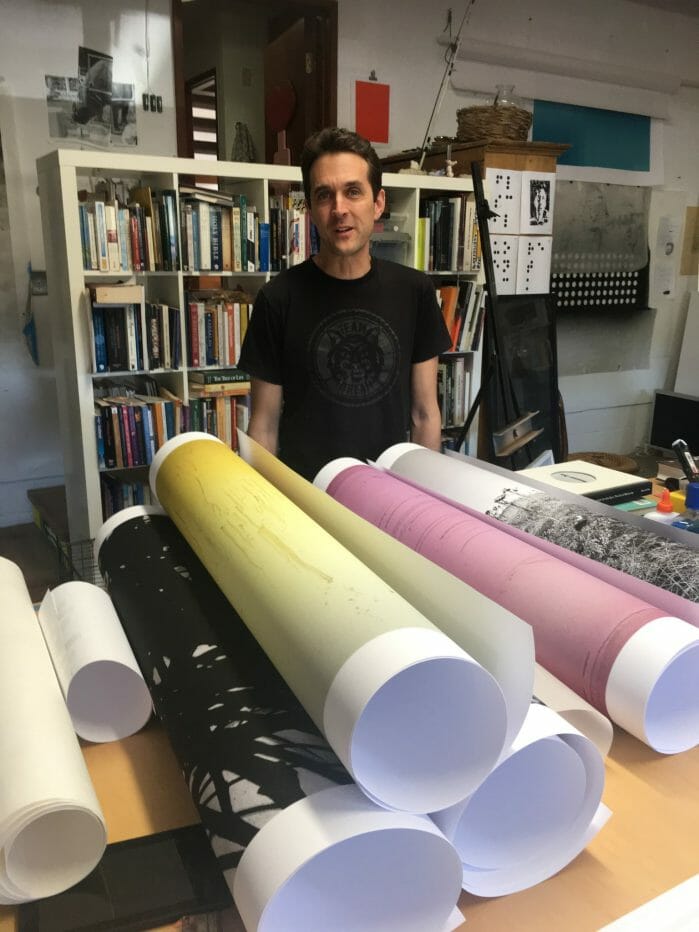 “I admire artists that can do the same thing for 60 years and are just perfect at it—I just can’t,” Alexander Kohnke says. Smiling, he adds, “I think I have mild ADD. I work better if I work on five projects at the same time.”

His studio incorporates the whole of the garage, with a belly-high worktable centered in the middle. A collage of meticulously drawn faces is laid out on the table with large rolls of paper stacked to the side. Dispersed throughout the rest of the space are a computer table, an antique letterpress, and shelves of books and supplies. Paint-covered stencils, prints, and drawings are haphazardly tacked to the walls. He unrolls a huge high-resolution photo over the drawings of faces, then unrolls a print of greenish-yellow color with random scratches, and finally a rayogram of what looks like two-by-four beams. The heavy beams of the rayogram (basically the shadow cast on light-sensitive paper) turn out to be twigs from a bird’s nest, scanned and then enlarged beyond recognition.

He carefully lines up the unrolled papers on the worktable. “I see what happens to them when they lay around in the studio. Six months later—‘Oh, that’s what I need to do!’” he says of his eureka moments.

A skilled draftsman, Kohnke’s art practice is a multimedia extravaganza that includes printmaking, letterpress, photography, video, assemblage, and just about anything else he might find interesting at the moment. He was born in Germany, lived in Switzerland and Belgium, and, lucky for San Diego, moved here from Los Angeles three years ago with his family of five. An accomplished graphic designer, he is a partner of Shiffman & Kohnke, designing exhibition catalogues for galleries, artist groups, and major institutions like the Museum of Contemporary Art, Los Angeles, University of San Diego, and The Broad. 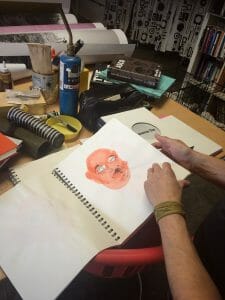 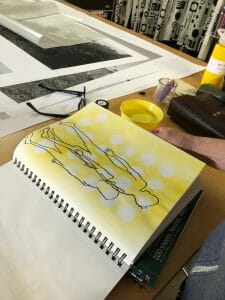 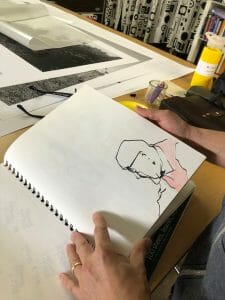 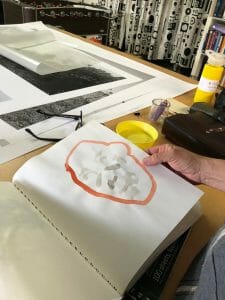 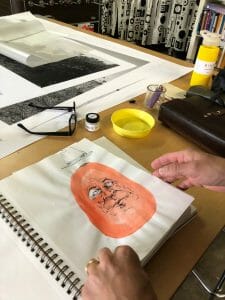 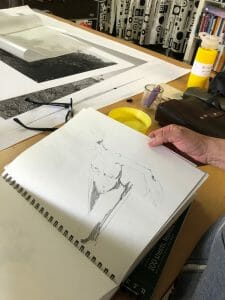 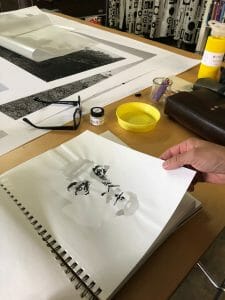 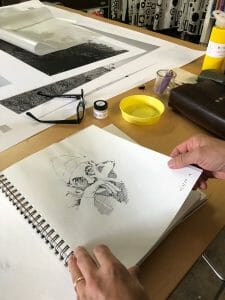 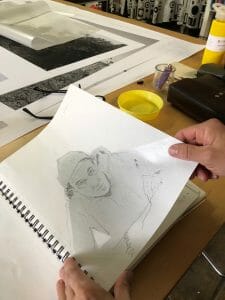 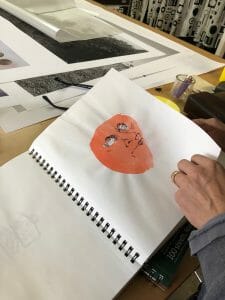 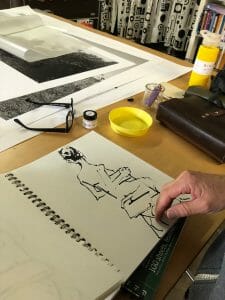 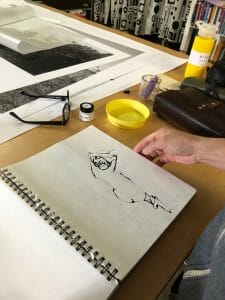 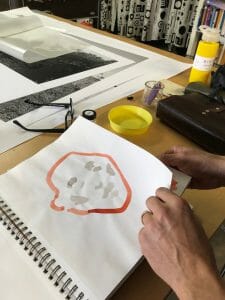 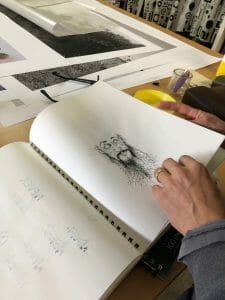 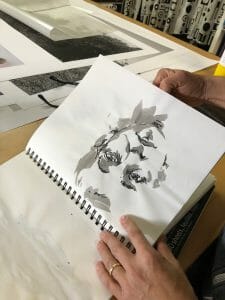 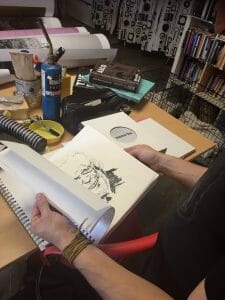 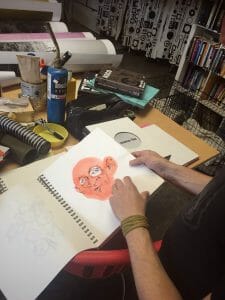 Rising fast on the San Diego art scene, he won last year’s San Diego Art Prize in the New Contemporaries category, and the Athenaeum Music and Arts Library will honor him with the contingent group show this May.

All the papers Kohnke has just unrolled are of more or less similar size. “I’m not really sure where it’s going… but to make some sort of combination… assemblage,” he says, as if contemplating the pieces for the first time. “I used to plan a lot. Now I make a bunch of things to play with.”

Dragon, a two-year-old rescue puppy with short copper hair—a veritable hurricane of energy—and another rescue German Shepherd follow each other around the table and bump up against me. Little Dragon lets me scratch his ears before he runs after the Shepherd and both return in a few minutes. Kohnke doesn’t seem to notice their near-constant running in and out. 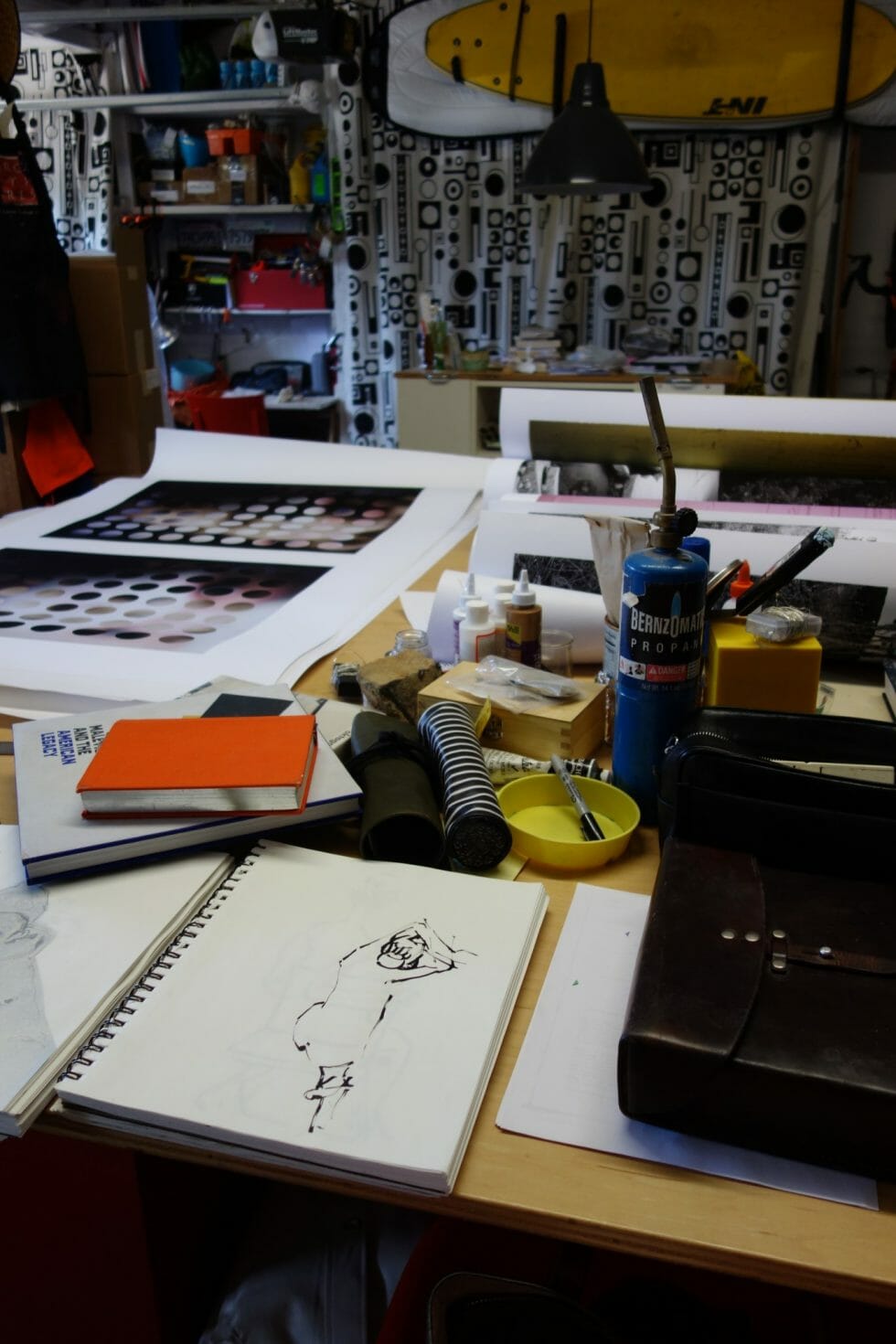 Pointing at a print diptych graced with his ubiquitous scratches and dots, he says in his soft German accent, “I love playing things off each other. Scratches are random. Dots are planned: creates tension.” In the first piece, scratches and a muted yellow grace the inside of the circles placed in a strict grid pattern. In the second piece, the same circles are blank and the color and scratches surround them. The two pieces were in fact printed at the same time. The circles were cut into the top paper, allowing the ink to print through the holes onto the bottom paper.

I ask him how he is so prolific with all the demands of a full household. He looks at me, and maybe a smile sneaks across his face. “You know how it is when you don’t want to work on something and you start cleaning the house… Instead of procrastinating on cleaning the house, I procrastinate on another piece.” Somehow this reminds me of the negative space he utilizes in the diptychs. There’s no downtime, no wasted space—everything gets used, incorporated, played with. 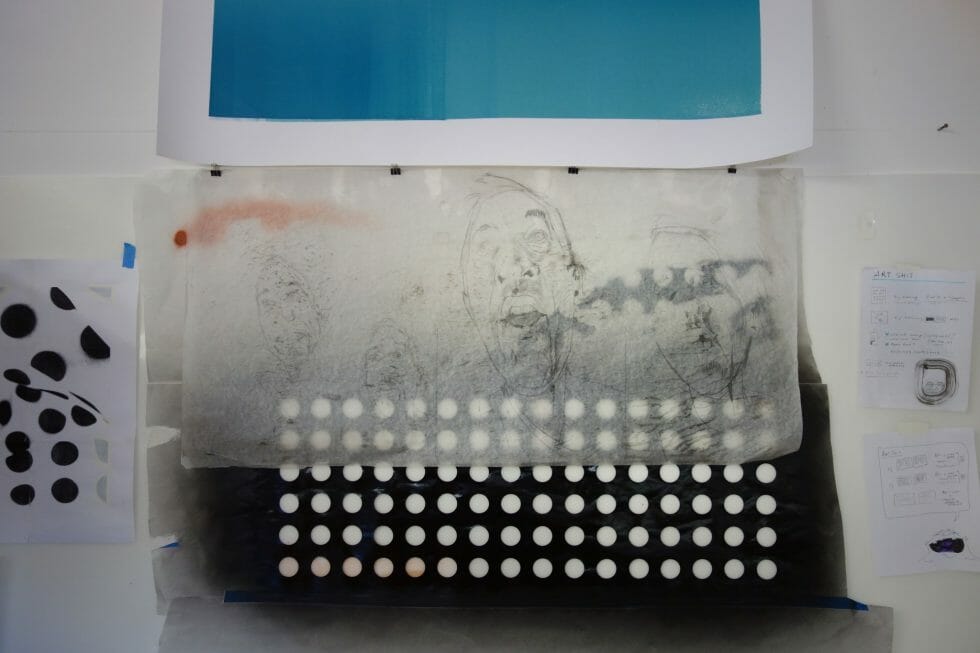 Kohnke sits down at his laptop, pulling up his latest video-based work. A soulful viola piece, performed by his oldest daughter, methodically plays in an endless loop. What looks like hundreds of ants marching across the screen in a perfect grid pattern is actually one ant, spliced together and looped. “Ants are terrible actors—they don’t take direction very well at all! So, it took me a long time to get one to go straight across the screen.” Then, a bit defeated, he says, “They’re not interested in sugar either…” I chuckle, accusing him of bribing an ant as the video loops back to a millipede bumping up and down to the viola. See the ant video HERE:

We pop out of his studio to see the work he has distributed throughout his house. The selection constantly revolves, as he needs the wall space. One piece is an eerie black-and-white photo of thistles evenly spaced over a field. He explains that they bulldozed the field to make houses and the thistles came up. “They’re invasive species, so they took over. It’s covered in houses now… Who’s to say who the invasive species are now?” Dragon circles around my feet, looking up at me, and whines for his rabbit-soft ears to be scratched.

Kohnke’s strong graphic design background can be felt in the perfectly executed craftsmanship of his work, which sets up the viewer for surprises, from the chaos of an artistic gesture or a celebrated moment of nature (for one piece he had simply gone outside and dragged the printing plate across the driveway). As Dragon once again ran in and out with his rescue companion, I couldn’t help but see the paradox of order and chaos in Kohnke’s rich home life and his vibrant work; scratches and dots methodically laid out, yet playfully open to the unexpected.