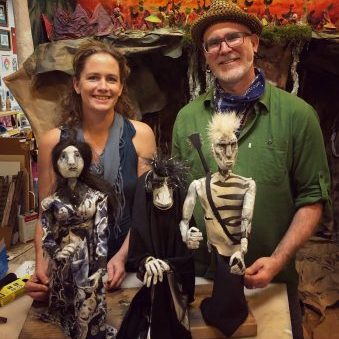 “I like making things out of trash,” says Iain Gunn of Animal Cracker Conspiracy, the award-winning San Diego puppet company.  He hoists a seagull made of scraps of garbage into the air on the end of two sticks, happily clapping its wings. It lurches up and down in a staccato rhythm as the wings spread and fold, a seagull’s recognizable grin masterfully molded into the beak.

I first visited Gunn, and his partner Bridget Rountree, before COVID-19 hit. They had just moved into the studio-barn built with their own hands. They couch surfed for four months during the construction, right after a five-month European tour with their usual sundry collection of performances in rural fairs, workshops in Prague, festivals in Germany, collaborations in London, and/or performances in the Middle East. Many Americans would be surprised by this travel calendar, not realizing how popular puppetry is in other parts of the world. Although sometimes referred to as the “bastard child of theater”, puppetry has a long and respected history in Europe. It’s a discipline equal parts craft, art, theater, storytelling, and, of course, a special kind of “magiciantry” to bring the puppets to life. A skilled puppeteer is an artist who can construct a person, place, and thing, and bring them to life, drawing upon sources as diverse as fables and current events. Animal Cracker Conspiracy lives up to this demanding standard whether they’re performing on stilts, behind shadow screens, or animating sock puppets.

“It’s the ultimate mixed media: craft, performance, plot,” says Gunn, as he shaves off a bit of wood from a solid wooden head he’s been patiently working on as we talk.  Rountree and Gunn create everything they use in their puppetry by hand, mostly from cardboard, castoffs, and trash, consciously or subconsciously relishing the life history of the rubbish. Tellingly, their first date was making cardboard sculptures until two in the morning, “and then we pretty much were inseparable,” laughs Rountree. Both studied literature and art, the right mix of disciplines to weave intellectual subplots, adult themes, and political commentary while avoiding heavy-handed moralizing. With a deep respect for the interpretation of the viewer, their thought-provoking work retains the power to inspire childhood wonder. I ask where their stories come from: “Are they made up out of thin air, based on mythology, movies, literature?” Without looking up from his whittling, Gunn answers: “All.” Rountree adds that they are constantly reading, researching, and learning, to fuel their creativity. At the time, she was reading Tim Morton, a philosopher with a science bent who debunks the scientific method, instead looking to artists to frame questions and find reality through metaphor. Heady stuff — and they say puppetry is for kids!

On a table sits a handmade stage with painted cardboard screens; each painted scene is the next stage backdrop in a series of stories. Gunn explains that the first story is about a man without a face, “and we are the capricious gods controlling him,” putting his hands together with a devilish grin. With each parting of the cardboard they share another story; the last backdrop a story about a fish who turns into a man and won’t eat fish anymore.

With a body-jolting eureka, Gunn exclaims, “We should be in service to the gold deity!”

“The capricious gods look like they’re in control, but they’re actually under the GOLD deity!” He’s referring to the first story in the series, and that is how the soup thickens — a little wizardry pops in from stage left.

Little did we know how our world, and theirs — especially as performers requiring crowds — would soon be turned upside down by the pandemic. “All our contracts, one-by-one, cancelled,” said Rountree in an interview with the La Jolla Playhouse, which responded to the quarantine restrictions by taking their “WOW” series to a digital format. They invited Rountree and Gunn to submit ideas, and their next project “Society of Wonder” quickly took shape. Their work is meant to be performed live, but social-distancing brought the necessity and opportunity of working with film. To meet the condensed time frame, they completely overhauled six underutilized puppets made a few years earlier, and created five puppet stages to accommodate the scene changes. With a nod and a wink to Russian author Antony Pogorelsky’s story “Black Hen”, a morality tale with magic chickens, “Society of Wonder” is a black and white film composed of secret agents, underground worlds, and a “Wizard of Oz” color-switch inspired by the absurdity of the times we currently live in.

Their five-part series “Society of Wonder” is sponsored by the La Jolla Playhouse and free to view HERE.