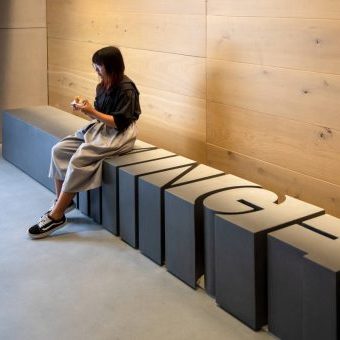 Around Labor Day 2018, the Mingei International Museum closed its doors in Balboa Park and began undergoing a renovation. Three years and a pandemic later the museum was ready for the public.

For its long-awaited reopening, Mingei opened its doors and installed over 500 objects and artifacts inside the new space. The first floor has a lot going on. A handful of displays from Mingei’s permanent collection will be on display for a year and then will be rotated. A restaurant is set to open in October 2021. A grab-and-go café. A small gift shop. A small seating area, both indoors and outdoors. And the entire first floor is open for anyone to enjoy, no admission ticket is necessary.

But it’s the second floor that houses most of the materials on display. For its reopening Mingei Executive Director and CEO, Rob Sidner curated a collection of works from all over the world in an exhibit titled HUMBLE SPIRIT / PRICELESS ART. These pieces focus on the simplicity and repurposing of everyday objects. Like, a small pig, roughly the size of a computer mouse, made from a consumed corn cob. Or a group of statues at the center of the exhibition made of straw, mud, and dung. And a look-away-and-you’ll-miss-them set of colorful kites beautifully arranged on the gallery’s ceiling.

Right next to it is GLOBAL SPIRIT which features pieces from Ted Cohen’s collection. The highlights of this exhibit are the caravan of animals made from a variety of materials, including an aluminum rooster the size of a grandfather clock and a wooden armadillo (which my 12-year-old nephew thought was a rat) the size of a wheelbarrow.

And while the Mingei is a museum of art, the museum itself is art.

Architect Jennifer Luce’s remarkable attention to detail comes alive for those who look close enough. On the first floor’s ceiling, there is a perforated stainless-steel canopy that stretches and covers the length of Shop Mingei and Craft Café. This piece, Suspended Refrain, is a piano roll of Mingei Executive Director and CEO, Rob Sidner’s favorite song “What Are You Doing the Rest of Your Life?” And to those who head out past the bar and through the south door will see Hedgerow a new steel fence, that was twisted by hand, outlining a new public courtyard, which used to be the roof of a loading dock. Luce was commissioned to create both pieces. For a bonus, the beer tap handles in the bar are almost a miniature replica of Hedgerow.

The building’s design subtleties continue as one moves through the first and onto the second floor. The staircase that makes this transition possible is adorned with the newly reinstalled Dale Chihuly glass sculpture, that serves as a natural chandelier. But the staircase itself has an interesting design feature. As you go up the final rungs, feel the change in texture and look at the steps under your feet. You will notice the final bit of the stairs move away from the Black Forrest white oak that covers the entirety of the museum, to a set of concrete steps, signaling a change space.

There are plenty of other fine details throughout the museum. Some are obvious like the newly opened terraces. Some are functional like the curtains in the main gallery or the theater curtain in the performance space or the door handle in the Founders Gallery. But I will let you discover the rest on your next visit.

Years ago I was trying to convince a friend—much to the dismay of my houseplant-obsessed millennial brethren—that plants don’t belong indoors because by virtue of their nature they are meant to be outside. Moreover, I argued that for any object to make it into any space, it had to have both form and function. I further sustained indoor plants’ only function was to be aesthetic, which I was vehemently against since an object whose only function is to be pretty seemed frivolous.

Recently, I have come to reconsider such hot takes. Partly because I’ve realized it is okay to have and keep an object whose sole function is the joy it brings. After all, that is what the world learned from Mari Kondo and the movement she sparked (yes, that was intentional).

But roughly a century before Kondo’s runaway best-selling books and Netflix series, a different idea emerged from a fellow Japanese compatriot and philosopher Sōetsu Yanagi, the word mingei. As Ashley Christie Content Producer for the Mingei noted, “Mingei actually translates to art of the people, and it was a revival movement in Japan” and it focused on handmade objects rebelling against mass production.

And this recent visit to the newly renovated and reopened Mingei International Museum is the other part that has led me to reconsider my hot takes. Most, if not all the art displayed at the Mingei is not frivolous. These objects, the artifacts on display as well as the design choices, were seemingly created to spark joy. Thankfully, they have accomplished just that. Visit the newly opened Mingei or become a Member. Check out their Free Family Sunday events.