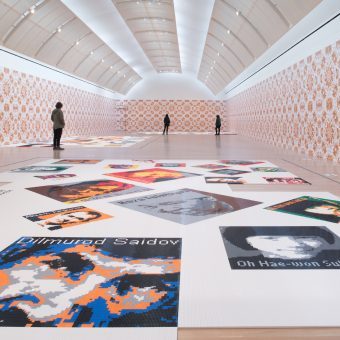 The installation Trace created by artist Ai Wei Wei includes 83 portraits of ordinary citizens imprisoned by their countries because of their outspoken social activism. Originally introduced in 2014 at Alcatraz prison in San Francisco, the portraits are completely made of thousands of lego bricks, set within three white lego panels placed on the floor within the Skirball gallery space.

The creation of Trace was shaped by Wei Wei’s own experiences as a prisoner of the Chinese government. Having previously been beaten and censored for his activism and outspoken criticism of totalitarian regimes, in 2011 he was arrested and secretly detained for 81 days, during which he was interrogated and kept under constant surveillance, and then prohibited from traveling abroad until 2015. He conceived and planned Trace during this period. Wei Wei was inspired by his young son’s legos, as he saw them as a playful, accessible and mass produced material that has global familiarity and connection.

Political dissidents from twenty-three countries comprise the portraits including the United States, Laos, Thailand, Uzbekistan, Kyrgyzstan, Indonesia, India, Russia, North Korea, Kazakhstan, Eritrea, Gambia, Turkmenistan, Belarus, Cuba, Ethiopia, Egypt, Cameroon, Sudan, Rwanda, Azerbaijan, Vietnam, China and Myanmar. While most of the names are unrecognizable to us in the United States, most are well known in their own countries and seen as advocates for human dignity and freedom of speech. Known here in the United States are portraits of Martin Luther King, Nelson Mandela, Edward Snowden, and Chelsea Manning.

The layout of portraits on the floor draws the viewer directly to the faces depicted. Due to the hard-edged brightly colored lego shape, these portraits look pixelated and relate to what we might see in surveillance tapes. On the walls of the gallery space is a bold wallpaper designed by Wei Wei entitled The Animal That Looks Like a Llama but Is Really an Alpaca. At first glance, the pattern looks decorative, but looking closely, we see hidden iconography like handcuffs, surveillance cameras and alpacas—a mascot for freedom of expression in Chinese internet culture.

While viewers may not recognize many of the names of the activists included in the portraits, we can understand the hard fought value of freedom of speech and standing up for social justice in our own communities. The exhibition together with Weiwei’s decades long commitment to free speech, is consistent with the Skirball Cultural Center’s mission which is inspired by Jewish values to build a more humane society. Wei Wei’s thought provoking installation brings awareness and may inspire conversations about social justice issues common to all countries around the globe.