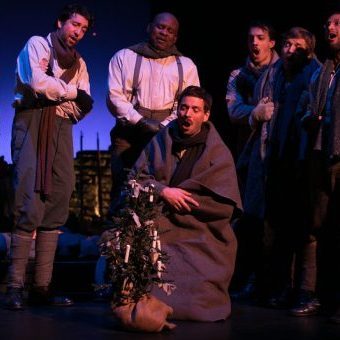 This year marks the centennial of the year my Italian-born great uncle Nolberto Rossi was drafted into the US Army. These past few years, I have often thought of him running through the trenches for the army of his adopted country, doing one of the most dangerous jobs of the war- that of courier.  Later, he was naturalized in San Diego, thanks, in part, for his service

So, it seems only fitting that the San Diego Opera, along with Sacra/Profana and Bohdi Tree Concerts, should be marking the centennial of the end of the Great War with a concert of music from the time in the magnificent Balboa Theater.

While my great-uncle wasn’t at the Western Front in 1914 since the US entered the war in 1917, I am sure he had heard of the event memorialized in this concert, the Christmas Truce of 1914.  It was an extraordinary event, one that spread through the war zone. Starting Christmas Eve, 1914, in the area of Ypres, Belgium, and elsewhere, soldiers on both sides started singing Christmas Carols so the other side could hear. On Christmas Day, the Germans came out of their trenches unarmed, to wish the Allies Merry Christmas. It was a moment never to be repeated, as the generals threatened punishment, but its memory has lingered down to this century.

According to Alan Hicks, stage director of the show as well as Resident Stage Director/Assistant Stage Director at the San Diego Opera, the concert, “All Is Calm: The Christmas Truce of 1914,” is a “choral opera” or a “radio play for the stage.” This is the third year of the production with the San Diego Opera playing a larger role than before. Pieces such as the first song the Germans sang as they rose out of their trenches, “Silent Night” are joined by iconic songs from WWI and texts from letters and poems.

What makes the show so unique, says Hicks, is that it “combines new choral arrangements of the popular tunes of the day, traditional seasonal music, patriotic songs, and hymns, with the actual words written by those who experienced this event. Rather than a historical dramatization, the text comes directly from the soldiers who were there.”

Hicks points out that the work is a capella,without instrumentation.

Says Hicks, “Juan Carlos Acosta  (of Sacra/Profana) and I spent a lot of time working out how the singers would get the initial pitch for each piece without showing our hand to the audience. However, the most difficult thing and the thing that our cast likely worked the hardest to accomplish was the different accents required ranging from upper class British, to Cockney, to Irish, German, and Scottish. Vanessa Dinning (our dialect coach and a member of the San Diego Opera staff) worked tirelessly to get the cast (of mostly opera singers) to speak with accurate accents..a fantastic job.”

You can hear the magnificent voices of the San Diego Opera and Sacra/Profana starting Friday, Dec. 7- Sunday, December 9 at the Balboa Theater downtown. The concert starts at 7 pm and concert goers are advised to plan for delays down Park Blvd and the 163 because of December Nights in Balboa Park.

Says Hicks, I think this is a tremendous and relevant work and the team (including the designers, cast, and crew) has done an amazing job bringing it to the stage.”

Hicks reminds those interested that KPBS will also be live-streaming the Saturday performance.