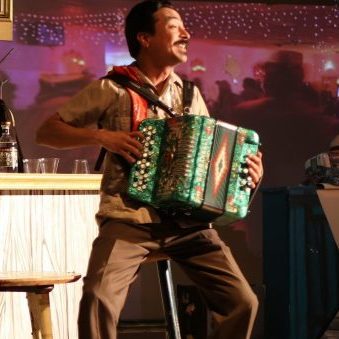 One of the more innovative theatre programs in San Diego Theatre celebrates a big milestone this year amid pandemic concerns. The San Diego Rep’s Latinx Play Festival, a festival of dramatic works highlighting the richness and diversity of the Latino experience, is turning five, usually a good strong indicator a program has staying power. But this year’s pandemic concerns also indicate the festival has something else -flexibility and creative solutions to what might have closed down a less-robust program.

According to Patrice Amon, producer in residence and festival program director, this year’s festival, which runs from Sept. 3-5,  is a hybrid experiment, coming out of the Rep’s experiences with audience engagement and productions during 2020 when the lockdown started in March of that year.

“We evaluated last year’s online (and saw) a major growth in accessibility,” said Amon. Last year,  The Rep instituted as a “pay as you can” last year-  which is has been retained this year, making the festival “very accessible- regardless of income at the same rate,” said Amon, noting with “no hierarchy of access” as well as a hybrid model of on-line and in person, festival attendance was much higher than expected.

Amon calls this year’s program, “particularly exciting,” noting that the themes reflect “a diversity of the experience of Latinidad and growing diversity of story tellers,” running from the Southwest to Miami, through Central America and the Caribbean.

According to Amon, the festival received 90 submissions- “a gift,” Amon calls them, all  excellent. The challenge, Amon said, was winnowing them down to four due to budget concerns.”

As difficult as the choice was, said Almon, she is pleased with this year’s  program which showcases the humor “and heart that runs throughout- the heart and commitment to (Latino) storytelling.”

This year’s line-up includes a broad inclusion of the Latino experience throughout the US, running from what it means to be Afro-Latino (four plays) to unique musical developments along the Texas/Mexico Border as well as a look at gender identity, family, access and integration and the legacy of colonialism. The four plays will be done as readings while the fifth production, “Conjunto Blues” will be fully staged with an accompanying performance by the playwright, Nicolás Valdez and traditional Conjunto players.

According to Amon, the new on-line platforms and in person engagement will allow a wide variety of people to attend the festival. The in-person form will include recorded performances primarily cast (POC and BIPOC actors) and directed by The Rep, as well as appearances by the playwrights themselves, the directors, and dramaturgs with the possibility of a live Q and A. Since the actors come from across the US, many of the actors will be live via Zoom.

For people watching simultaneously on-line, they will also see the recorded show and like the audience, they, too, can participate in the Q and A- but through Chat.

One of the new changes is an in-person version of the festival, being held at the Conrad Prebys Center at San Diego State University.  According to Carmen Amon of Patron Services, a number of COVID protocols will be in place to assure both patron and performer safety.

In addition, she noted that all “In-person audiences, staff and artists will be required to show proof of their vaccination or test via vaccination card, electronic vaccination record or official test results documentation from a testing facility.”

According to Carmen Amon, staff members  will be on-site at the Conrad Prebys Student Union at SDSU to check in audience members and verify vaccination status.”  The idea, said Patrice Amon, is to give festival goers a sense of security and a comfortable place to go.

Why a Latinx Festival

As originating director of the New Latinx Play Festival, Patrice Amon has seen the festival grow rapidly to include various expressions of the Latino experience. As a Latina theatre professional herself, Amon stressed that while she loved theatre growing up, she, like many young Latinos, kept watching for images of themselves on screen and stage. “I never saw anyone whose stories reflected my experiences on stage.” That all changed when she saw Luis Valdez’s (of Teatro Campesino) play,  “Mummified Deer.

“The white couple sitting next to me was looking at her (the lead) and listening to her- they saw her importance and her value. That’s why it matters. That changed my reality, that changed my expectations of the value of people from my community. It could be seen and the theatre is a place where that can happen,” said Amon.

And from that, Amon said, it became clear that theatre would be used to create a sense of representation, especially in a region like San Diego where Latinos make up about one quarter of the population.

“It’s important to have those stories be told, said Amon. “Young people are watching. People of all ages are looking to see do I hold value in this community, am I a participant who has equity, do you care about my voice.”

As Amon explained, the festival features a diversity of voices and approaches, representing the broad identity of Latinidad, or the wider experience of being Latino/a in the US. The festival runs from September 3-5 and includes a playwrights panel, a directing panel, and a historical context panel, among others.

Rachel Lynett’s striking play, “Black Mexican,” opens the festival with a bold, decisive look at what being Afro-Latina in what Lynett called one of her “most personal plays yet.” Inspired by the cultural appropriation scandals of Rachel Dolezal and Jessica Krug,” Lynett’s play asks who and what gets to be defined as “Latinidad” through the characters of Alia, an Afro-Latine Belizean student who suspects her professor, Ximena, is really a White woman positing as Cuban. As a Queer, Afro-Latine writer, Lynett’s work asks a most timely question for many young Latinos: “What does it mean to sit cross culturally and across identities when you are just trying to exist?

The festival moves into high gear with three plays that look at identity across gender, geography, and genre. Lily Gonzales opens day two with “(trans)formada,” a tender, nuanced look at what it is to negotiate being queer, Mexican, and the child of immigrants in a world that makes being any one of these things complicated. Gonzales guides their character Sam, through a maze of identity issues, which, ultimately, in a surprise twist, takes her, and the audience, “home.”

Daniella De Jesús pulls no punches in her play, “Get Your Pink Hands Off Me Sucka and Give Me Back.”  Known for her work in Orange Is The New Black, the Dominican-Puerto Rican actress and writer takes a darkly funny look at what colonization of the “New World” has wrought both in the lush islands of the Caribbean and the arid expanses of Spain’s museums and monuments to past gory and empire.

Multi-disciplinary artist Nicolás R. Valdez roars in from San Antonio, Texas, ready to raise the roof with a border music staple, Conjunto, that can be heard through neighborhoods and backyards from San Diego to San Ysidro. “Conjunto Blues” is Valdez’ love letter to a type of music found in barrios all through the Southwest. Born on the Texas border, when German immigrants introduced the button accordion at the end of the 19th century, Conjunto is Mexican and Mexican American roots music, what Valdez calls “the voice of the Mexican-American working class.”  At the same time, Valdez’ one man play is a taut, wryly humorous ode to his grandfather, who taught young Valdez the value of community and family as he taught him how to play the button accordion.

For Valdez, part of the honoring of his grandfather’s legacy is to pass on stories of community, a sense of connection fundamental in appreciating the cultural traditions. It’s a language to speak with“ said Valdez in an interview on Zoom, in a way that doesn’t run to the stereotypes we see all the time.”

Valdez, an accomplished accordion player himself, will present a spotlight Conjunto performance along with several other musicians.

The festival closes on a play with plenty of atmosphere and more than a few spirits. Playwright Rosa Fernandez takes on gender, cultural identity, the paranormal, and the ghosts of colonizers past in a new work where nothing is quite what it seems. In “A Skeptic and a Bruja,” Priscilla buys a house but soon realizes something is not quite right. When she calls in Sam and Jesse, hosts of a hit ghost hunting show, “The Skeptic and the Bruja,” they all get more than they bargained for as they discover that the ghosts of our collective past still walk among us.

The Rep provides three main ways to watch this year’s Latinx New Play festival. You can either watch it in person at the Conrad Prebys Aztec Student Union Theatre, watch everything live online, or watch a recording of the festival until 6pm PT on Monday, September 6.

Festival passes are a suggested $50, and individual play tickets are available, although the Rep has a pay what you can policy. This way, says Amon, everyone has access regardless of income.

For those who have already bought in person festival passes, and would like to shift to a virtual pass, they can contact the  box office at (619) 544-1000 or email [email protected].

For more information on performance and panel times, please see The New Latinx Play festival. Also, please note, all in person attendees are required to wear masks and to abide by the established COVID protocols.