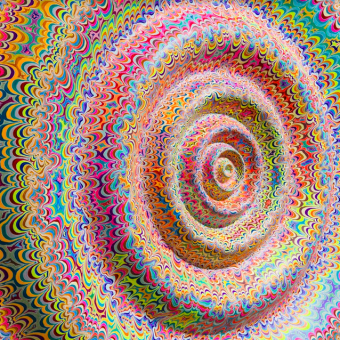 Bringing together the work of three locally influential artists, Quint Gallery’s latest exhibition is a three part journey featuring the work of Kelsey Brookes, The De La Torre Brothers, and Christopher Konecki. Audiences will gain a look into each artist’s world, allowing them to be visually ushered from room to room by their artwork. Highlighting newly completed sculptures from Brookes’ series, “Fibonacci, Waveforms and Capsid Symmetries”, there are also wall-installed dioramas by Konecki and a multi-media lenticular piece by The De La Torre Brothers.

Kelsey Brookes has been painting pieces that focus on viruses and the like for years, but has now shifted his approach to the subject matter. Most of Brookes’ pieces on display are sculptures  but he has also begun integrating Fibonacci sequences, which allow him to create sculptures that morph the work entirely and allow for re-invention of their visual interplay. Reminiscent of the works that have gained international acclaim for the artist, each of his new pieces straddle between the two worlds creating something truly exceptional.

Christopher Konecki has been an active participant in the Southern California art scene for quite some time, working with Pangea Seed, developing and organizing Cohort Collective and organizing/curating Karl Strauss Arts and Amps. Detour takes viewers through makeshift worlds that are terribly precise and even more alluring in person. Konecki works in a variety of mediums, but in this exhibition he showcases one of the most exceptional facets of his artistic style, dioramas. While some are wall-mounted dioramas, others sit atop strategically placed shelves. In the artist’s biography his work is described thusly; “Konecki’s work is explorative of social consciousness, generally irreverent, and focused on subjects that are both serious and absurd. His use of found and ‘repurposed’ objects in his work advocates the reassessment of typical ideals of function and beauty. Elements of nature often collide with harsh urban landscapes and elements of street art and graffiti, symbolizing the ongoing struggle between the harmonious coexistence of these two competing monumental forces.”

The De La Torre Brothers are uniquely trained artists with a background in glass and sculpture. The early part of their career saw them creating artwork that presented a newer approach to these materials, while still honoring their ideals and cultural origins. By creating wondrous mixed media glass pieces that range from fleur de lys to luchadores, they have developed a style that is distinctly unique to them. Categorized as kitsch in some circles, they dwell in realms which few venture, and the result is most often poignant, tongue in cheek assemblages that dazzle the viewer. In this exhibition, the brothers have opted for displaying one of their signature lenticular works. What is a lenticular artwork? It is a 3D image that allows for a printed flat object to have depth as well as the ability to view it from varying angles, amazing? Yes. They have done a masterful job conceptualizing and utilizing the medium in their work, it is even more enveloping when you are standing or rather swaying in front of it. The piece is completed by a custom built frame that is comprised of mixed media glass sculptures, mounted in a wallpapered room.

Sitting with the large scale mental trip, (titled “Sloth”), I am reminded of a brief conversation I recently had with Einar De La Torre. While talking about art and careers he stated with a charming elegance, “you must create to create, at some point it will all come together.. or it won’t”, now perhaps this is my memory fictionalizing a sentence that was simpler or more complex, however it was the way in which he exuded the confident knowing of a creator that made the moment itself memorable. Recalling this moment whilst ruminating on the work of all three artists, it dawned on me; it is exactly that je ne sais quois which makes the work of each artist in the show stand uniquely on their own. They all display a depth in their work that comes purely from an artistic compulsion to create. It is a palpable energy and something that can be felt by even the most unversed of viewers. The magic of the exhibition lies in the internal dialogue that occurs while you sit with the art. Give it time, and it will happen to you too.

Exhibition opens Saturday, 29 September at 6pm and runs through to 10 November.