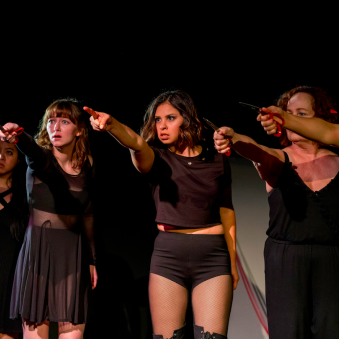 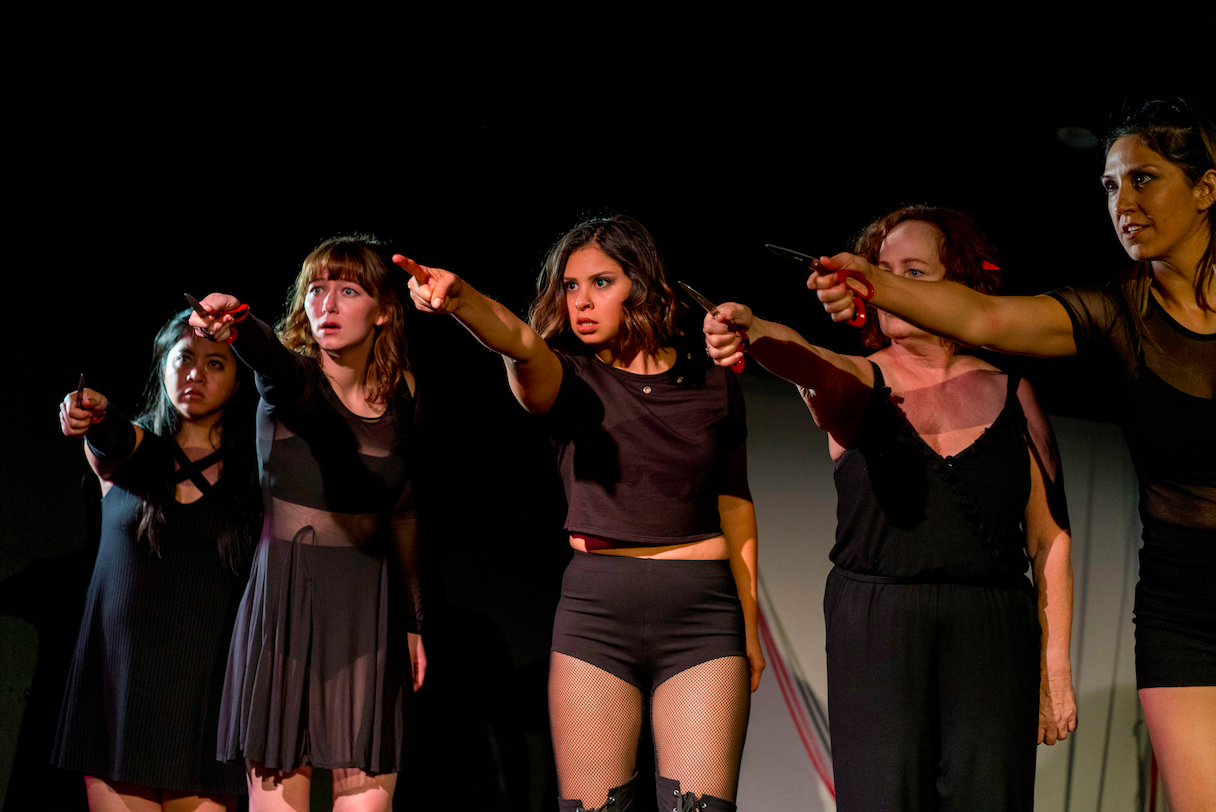 Revolt. She Said. Revolt again. A brutally honest and delightfully uncomfortable depiction of, well, being a woman. Period.

“When you were here before, couldn’t look you in the eye,” begins the familiar first words to Radiohead’s ‘Creep’. Nothing about the way the play starts says it is going to be a relaxing show. It isn’t. Nothing about being a woman is a walk in the park either. Or at least one without the accompaniment of a nice pair of shears.

Tucked away in the upstairs Black Box Diversionary Theatre in University Heights, an intimate venue was imperative this night. Part of the play’s power was its ability to reel you in as part of an impromptu ensemble. The audience were characters too, involuntary onlookers to a reality that feels wrong to watch.

Alice Birch’s loud and ruthless approach to feminism is meant to startle and jolt you awake. Despite the constant iterations of “I’m sorry” throughout the raw and uninhibited script, this work isn’t one bit apologetic.

Director Kym Pappas knows how to conduct a perfect storm. This show required each character to exhibit vulnerability and gravitas, a challenge which each player (five women and a man) excelled at. Even during funny moments, the comic relief was never a relief. There really was no let up until it was over. A women’s hell never ceases.

Charly Montgomery, the youngest of the cast members, performed with an innocence that worked to her utmost advantage here. As women, we aren’t prepared to handle sexual abuse and emotional assault, we are merely thrown into battle.

The opening vignette, a tête-à-tête after a first date, shows Montgomery tensely attempting to swerve Salvador Velasco’s sexual advances and forge an emotional connection. His animalistic desires appear unperturbed. Her next plan is to at least equalize their power–”Make love with” not “to” and so on. He grows increasingly uncomfortable with her words and actions until they ultimately reach a stalemate.

Without exposing too much of the play’s privates, the grenade self-detonates during the final climax, and each character loses their patience in their own way. Time is up. Kirstiana Rosas, slices and splices the red strings used to symbolize various forms of oppression. For her, during one of the heaviest moments of the night, it was her decision to lie down and bare all on Aisle 7.

In the fallout of recent political uproar, the ugly and horrific underbelly of womanhood has been exposed in all of its glory and grossness. What Birch has managed to do is create a work that teeters on the edge of psycho without giving in to the stereotypes of “angry bitch” feminism. Bad relationships, chauvinistic employers or crippling insecurities, the narratives of this work will mold into your own personal narratives.

Kathi Copeland is done baking heart-shaped cupcakes, Carla Navarro objects to a marriage proposal and Claudette Santiago just wants Monday’s off. And don’t dare ask them if it’s “that time of the month again”.

However, when it comes to a woman’s demands, both simple and complex, the most men seem to be able to do is sympathize, at best. “The thought is not enough.” Birch has figured out a way to deliver the feminist objective in a way that is more comprehensible–or at least more audible–to men. The inclusion of a singular male actor was an intriguing strategy. Salvador Velasco was exceptional in expressing the various aspects of men’s bad behavior and lack of understanding.

In a world where women are still expected to look pretty, face their attackers with civility and embrace pain, this play refuses to behave. Forced to face my own demons, I came in damaged but I left fortified.

Now open through September 29. Prepare to be triggered.

To purchase tickets, go to https://www.ticketor.com/innermission/default?utm_source=OrderConfirmation&utm_medium=email&utm_cid=110748&utm_eid=5813315.