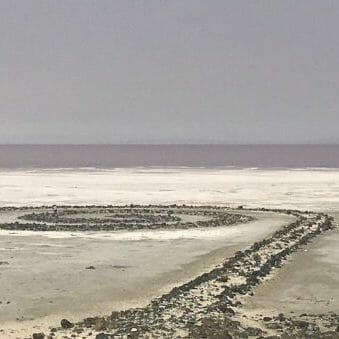 A Visit to Spiral Jetty – A Magical Place

Spiral Jetty is not an easy place to find. This renowned Land Art sculpture is located in Rozel Point, at the Great Salt Lake. Traveling on a combination of highway, two lane roads and then a gravel/dirt road for several miles, it is a two and a half hour journey northeast of Salt Lake City, Utah. Constructed in April 1970, it is considered to be the most important work of American sculptor Robert Smithson. This 15 foot by 1500 foot natural art piece was created from over 6,500 tons of basalt rock, salt crystals, earth and water.

During the 60’s and 70’s a group of artists interested in moving out of the museum and gallery spaces began using the land to create art and engage audiences in a profound and non-commercial way. Smithson was drawn to the Great Salt Lake because of its pinkish-red hue (generated from the water’s algae) and at the time didn’t have a clear sense of how the artwork would evolve. In his 1972 essay, he noted his impressions “As I looked at the site, it reverberated out to the horizons only to suggest an immobile cyclone while flickering light made the entire landscape appear to quake. A dormant earthquake spread into the fluttering stillness, into a spinning sensation without movement.” This feeling of spinning while standing still is what inspired Smithson’s Spiral Jetty.
As I stood at the top of the hill overlooking Spiral Jetty, I tried to imagine how several dump trucks, tractors, front loaders and a slew of people journeyed to the location, and how the rock, crystals, earth and water was used to create an artwork that today seems to be in perfect harmony with the environment.
Because it sits within the lake, like other Land Art it is subject to water levels rising with the tides and amounts of rain, so the spiral also changes. At times, it has been completely submerged under water, while at other points in time, it’s been visible, as seen since the drought of 2002. This process of submergence, and re-emergence will eventually lead to a permanent disappearance of the work.
With this in mind, Smithson documented Spiral Jetty with text, film and photography much like artists Richard Long’s non-intrusive walks and Christo and Jeanne-Claude’s Running Fence, Sonoma and Marin Counties, California, 1972–76.
Lake levels vary from year-to-year and from season to season, so the Spiral Jetty is not always visible above the water line, however, on my visit the surface of the bottom of the lake was visible, with no water to be seen except in the distance.  The surface was dry, salty-hard, a white-ish gray-ish color and crusty, and there was a pink-hued tinge to the water seen in the distance.  I walked the entire path of the spiral which felt like a spiritual walk, similar to labyrinths I have walked previously. The beauty of Rozel Point includes the sounds of the natural environment, with White Pelicans overhead, scrub brush along the shoreline, and where large volcanic basalt rocks cover the landscape. I kept thinking about the task Smithson took on in creating this Land Art along with many others, together with the realization that this is a forever changing environment and where one day Spiral Jetty would disappear permanently.
While there are no facilities at the site, and only a few very small signs directing people to its location, I saw a small number of cars coming and going, and surprisingly a family with small children who camped overnight.  My visit to Spiral Jetty was long overdue, and I wasn’t disappointed – it is a magical place to experience.