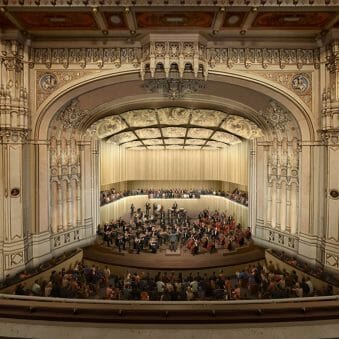 Copley Symphony Hall at Jacobs Music Center is undergoing a $125 million renovation to transform it into a world-class hall and is set to reopen its doors in Fall 2023.

The San Diego Symphony kept busy during the pandemic, even when they couldn’t perform. They opened the Rady Shell @ Jacobs Park in August 2021. And started the $125 million renovation of Jacobs Music Center, which was announced on Wednesday, February 23, 2022.

“We have just completed phase one,” said Martha A. Gilmer, CEO of the San Diego Symphony during the media preview, “which includes upgrades to the infrastructure of the building, including the air circulation and filtration.” This seemed like an apropos announcement as COVID restrictions begin to wane and the world starts gathering indoors once again.

Still, updating HVAC systems is not exactly the first thing that comes to mind when thinking of improvements to a symphony hall. It is also one of the more invisible ones. Yet, this is just one of the many improvements announced.

Part of the reason why this renovation is necessary is because the Jacobs Music Center opened almost a century ago, as the Fox Theater in 1929. The theater was announced as a $1.5 million project in 1928, which would be nearly $25 million today. At the time it was one of the largest movie palaces on the west coast. But the space was originally designed for people to watch movies, not a symphony.

John Frane, the lead designer for the project and design principal for HGA, summarized the technical challenges and opportunities this multi-million-dollar endeavor presents when he said, “How do you take what was a [20th century] movie palace and turn it into a [21st century world class] symphony hall?”

Some of the changes and upgrades are for the musicians in the symphony, like new rehearsal rooms, new dressing rooms, a greater music library, and “climate-controlled instrument storage.” Some of the retrofits are for the public, such as new seats and seating arrangements, better ADA access, and better views throughout the hall.

And some of the upgrades are for everyone to enjoy, such as the “custom-designed permanent orchestra enclosure, new orchestra risers tailored to the new stage, and a tunable acoustic canopy” as well as the “enhanced stage lighting, an improved sound system, and an integrated video display system,” as noted in the press release.

“This vital project will preserve and celebrate the extraordinary legacy and architecture of our beloved home, while adding critical new infrastructure and features and enhanced acoustics, which will do so much to serve our musicians, our audiences, and the entire community of San Diego,” said Gilmer.

Meanwhile, Rafael Payaré, Music Director of the San Diego Symphony, joked this was the best birthday present ever, as his birthday coincided with the announcement. He has been involved with the planning process and is excited about the growth the symphony has experienced since he arrived.

Towards the end of the media event, Payare noted, “An orchestra needs an instrument like this [new upgraded hall] to enhance and try demonstrate the amazing, fantastic capability” of its musicians.

The renovation is scheduled for completion by late 2023 and the fundraising details will be revealed at a later date. In the meantime, the San Diego Symphony will be performing free one-hour concerts across the San Diego County as part of their Music Connects program as well as continuing its 2022 winter-spring season in multiple venues across southern California.