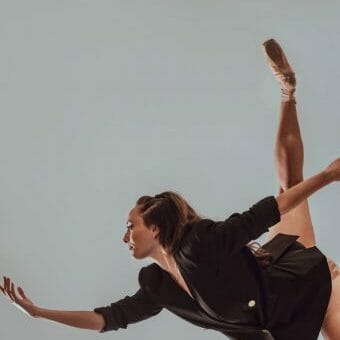 In an era where it is cool to be woke, companies and corporations have made extensive efforts to look and feel more feminist. But how can these institutions promote true inclusivity instead of mere virtue signaling to avoid cancellation? The Rosin Box Project (TRBP), San Diego’s leading contemporary ballet company, says it’s about nurturing an authentic process from beginning to end–a process which starts from its nucleus. And that involves utilizing women choreographers.

Founded in 2018 under the vision of Artistic Director Carly Topazio, TRBP’s goal is to “create a safe space to create.” The company has created a platform–literally–for diversity in a field conducive of it this whole time. This does not mean that TRBP is a strictly female company but its artistic vision does stem from women’s perspectives of women’s experiences.

Anyone familiar with the institution of classical ballet knows that it is a notoriously patriarchal one–most renowned artistic directors are men. Even though ballet is a woman-dominated sport, you cannot help but think of the negative connotations that come with it. For decades, people have used the idea of this “girly” activity to diminish its legitimacy as a sport, despite the athleticism, artistry, and facility it takes to succeed in the field. TRBP sees these past patterns and raises us a new future for ballet.

The Rosin Box Project will launch its new season, Interplay, with the March Series. The timing of the series aligns perfectly with Women’s History Month, featuring two new pieces by Topazio and fellow resident artist, Bethany Green. The two choreographers differ in their artistic approach to story-telling, however, both converge in pushing the boundaries of ballet in a way which simultaneously celebrates old conventions and elevates new voices.

A great quote by Mark Twain reads that “Courage is resistance to fear, mastery of fear–not absence of fear.” Topazio highlights the complexity of fear in Don’t Look Down–inspired greatly by the words of Twain. “We don’t even know we have a fear until we are faced with it,” she commented. “[This piece marks an] awakening and realization that fears never go away” but find our “courage in the face of those fears.” Moreover, as female choreographers put themselves out there in a male-dominated arena like this, there is a perceptible fear of judgment. As women in general, there is an unmistakable fear that goes along with existing in the world.

Green takes a narrative-based approach in Devil Get Behind Me, a bold look at loyalty, disloyalty, joy and frustration. Set to a medley of bluegrass music, she created a loosely-Faustian chronicle with a melange of characters a part of a society, anxiously awaiting guidance on what to do with their lives. “I want people to be able to lay their own story within the narrative,” she commented. “[I want to look at] how frustrating it is to be a human in this generation with a sensory overload of information and misinformation.” The backdrop of bluegrass music creates a celebratory atmosphere which bonds the performers and audiences together in learning to laugh amidst the hard truths we are challenged with.

Both Topazio and Green debunked the notion that ballet is a dying art. But, we all agreed, it is adapting with the times. We can honor traditional works for what they are with a historical lens, but we can also acknowledge that La Bayadère does not hold a place in the modern zeitgeist.

“Contemporary ballet breaks ties with the holds that classicism has on the sport,” Topazio asserted. “The classics have beautiful aspects to them but are [generally] steeped in racism and misogyny.” We can sew together the definitive technique and universal movements but bring new life to it in the creative process which makes it a closer reflection of society as it is now.

Performances for TRBP’s March Series begin March 4 and will continue through to March 6. The show begins at 7:30 pm each night. The March 5 show will be livestreamed for those who are unable to attend in person. CLICK HERE to purchase tickets. CLICK HERE to for more information about The Rosin Box Project and their 2022 season.