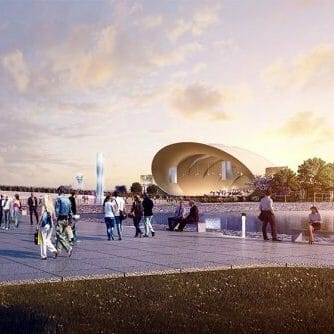 As the expectant crowd sat in the midday sun behind the San Diego Convention Center, on Embarcadero Marina Park South, to the west of them, the USS America was leaving the bay. Perhaps a fortuitous sign, a ship setting sail, as the San Diego Symphony embarks on their own new journey.

Thursday August 29, 2019 marked the official groundbreaking for what will become the San Diego Symphony’s Bayside Performance Park, an effort roughly 20 years in the making.

After four port commissioners and a unanimous vote by the California Coastal Commission, the vision has now begun to materialize.

Martha Gilmer, CEO of the San Diego Symphony personally thanked Una Davis and Jack McGrory, Ernest and Evelyn Rady, as well as Joan and Irwin Jacobs. For their extraordinary efforts and contributions in making the Bayside Performance Park happen.

Gilmer recalled that the Jacobs “floated this idea of a permanent venue, some 15 or 20 years ago.” She also thanked the Jacobs for being “stalwart, persistent and determined in their desire” to support the project from beginning to end.

Garry Bonelli, Chairman of the Board for the Port of San Diego, mentioned how the permanent structure will channel sound towards the audience and not across the bay, which has been a problem for Coronado residents. He also noted some of the new features and improvements, like more benches and permanent restrooms.

Randa Calligio, CEO of the Port of San Diego, commended the efforts of all involved for completing the environmental impact report and ready for review in a year. “And within a year after that we had the California Coastal Commission unanimously approve our Port Master Plan Amendment that allows this project,” she added.

San Diego Mayor, Kevin Faulconer, closed the ceremony and said this venue and efforts like it create a “lasting legacy for our city and culture.” And concluded his remarks saying, “It’s [also] pretty darn cool.”

Per the press release, “Bayside Performance Park will be only waterfront concert venue of its kind on the West Coast.”

The park will be a public space, closing only for symphony performances and events.

The $45 million project is slated to open in the summer of 2020. Just in time for the symphony’s summer series of concerts.