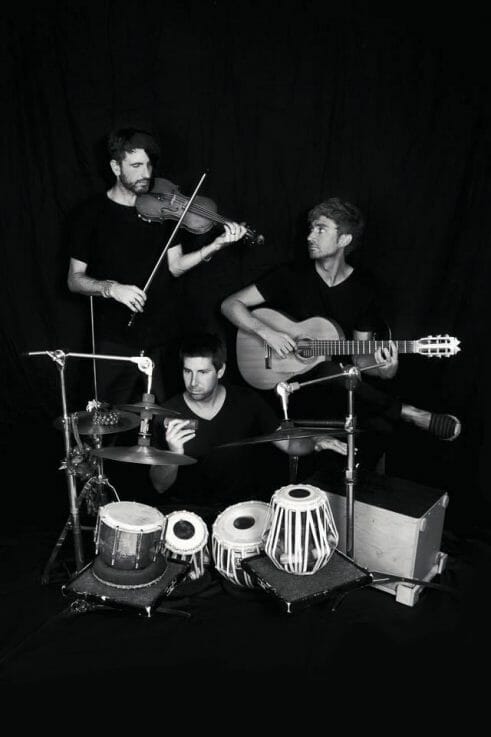 Therianthrope: Not Your Ordinary Band

Their musical compositions are layered with playful, intricate melodies that provide an endless element of wonder and surprise. Their sound is refreshing, soulful and timeless. Each song is filled with clever guitar riffs, pulsating percussion, and scintillating accents of an electric violin. The harmonious collaboration of talented artists creates an on stage synergy that is captivating and unforgettable.

Therianthrope’s musical style stretches beyond existing genres. The lively rhythms, at times, carry a mellow ease and laid back feeling, which reflect the term the band uses to define their style: “India Surf Music”. The term is fitting in that it also speaks to the fact that both Dusty and Miles, who share a love for surfing, began conceptualizing many of the songs for the debut self-titled album out in the water waiting for waves.

The incomparable sound of music the band creates reflects the 20 plus years of experience each artist has dedicated individually to honing their craft. Their sound summed up in a short phrase is, intriguing and brilliant. Equally intriguing are the musical journeys, which brought the band members together. The collaboration is comprised of three artists, who are true craftsmen and musical geniuses in their own right.

Dusty Brough began his musical training at the age of 12, as a Flamenco guitarist. He eventually started playing jazz and explored other international musical styles. Miles Shrewsbery began playing percussion on the drums, which then led to his training in Indian Classical music and other eastern and western styles of percussion. Fabrice Martinez is a self-taught musician from France who performed throughout Eastern Europe for 10 years, playing the violin on a mule-drawn Gypsy wagon.

The band’s unique name Therianthrope, pronounced thi/ree/en/thrope, suggests their state of being different, standout and unique. In ancient eastern mythology, “Therianthropy” represents the act of shape shifting from one form into another, and specifically, from human into animal form. The idea of shape shifting and transforming into another aspect of ones self is a concept, that when applied metaphorically, reflects in the bands ability to produce a new sound by synthesizing old and contemporary genres in a seamless and seemingly effortless way.

As an art form, music is like “Therianthropy” in that it acts upon the listener’s most primitive senses, allowing thoughts, emotions and actions to be transformed. One of the goals of the band is to positively contribute to the growth and transformation of the art form by building upon classical traditions that ultimately expand the sound of music. Therianthrope takes listeners on an exciting rhythmic journey through a rich musical landscape that pushes boundaries and broadens the possibilities of what music can be.

For more information on tour dates and to download their new album visit: http://therianthropeband.com