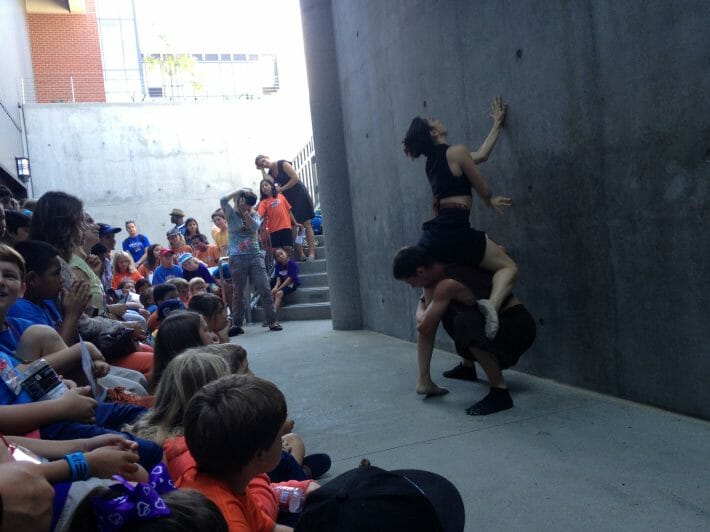 The pedestrian traffic of Downtown might be pausing in stride this weekend, stopped by the incredible work of any one of the six dances happening in unexpected locations along the Metropolitan Transit System Orange line. Jean Isaac’s Trolley Dances have been a San Diego tradition since 1999, and one that I hope will never end. (Showing September 27 – 28, October 4-5, 2014)

This one-of-a-kind spectator experience begins in City College. The opening number (Grassy Knoll; choreographer: Terry Wilson) on the grass hill before the grey concrete buildings of brings a certain levity to the bustling corridor. With the dancers using backpacks in their costuming, it takes a minute to differentiate them from the actual City College students walking in view behind them, on their way to class. This juxtaposition, young students stopping to watch the dancers who are dressed much like them, is the best illustration as to why the 16th Annual Trolley Dances is such a treasure.

To see a location in a new light, to understand that art can (and should!) be everywhere. With the popularity of New York’s Sleep No More, San Diego REP and La Jolla Playhouse’s El Henry and La Jolla Playhouse’s continuing Without Walls performances, there is a growing excitement to site specific performances and the Trolley Dances is certainly one of the local organizations at the helm of this movement.

The intimacy of small spaces is startling (a provocative, purposeful performance by Ariana Siegel and Jedi Taylor, choreographed by Jean Isaacs in a stairwell!), the grandeur and sunlight of the quad is exuberant, and the acoustics of Market Creek Amphitheater with provocative spoken word by Ant Hill (an incredible talent and well-chosen infusion) could not have been better matched.

The highlight of the two+ (depending on the trolley timing) hour show was certainly the second stop, at 12th and Imperial. Choreographer Michael Mizerany has impressed previously with his work on Cygnet’s Spring Awakening, but enters an entirely new meticulous and intentional level with his Clock Tower number, set to 2Cellos. Echoing the coloring in grey, red and black purposeful, pedestrian costumes, emulating the crisscrossed architecture of the tower in the symmetrical and asymmetrical movement, even the height was drawn in a gorgeous fall closing the number. This dance was one I wished I could rewind and watch in slow motion over again. That sentiment was echoed by my fellow audience, over 70 Urban Discovery Academy students participating in the KIDS ON BOARD preview performances, when a boy in the group (who couldn’t have been more than 9 years old) began yelling “ENCORE! AGAIN! AGAIN!” at the ending of the piece.

This show will make even the audiences unfamiliar with dance, look at both these locations and the power of movement with new eyes. The journeys between these stops (all on foot or via the MTS Trolley system) are cathartic rather than transitory, unlike a traditional dance show the audience has time between to digest each piece individually.

I cannot more highly recommend the Trolley Dance experience, and hope these weekends (September 27 – 28, October 4-5, 2014) have trolley buses filled with those eager for a new perspective.