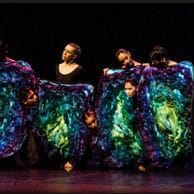 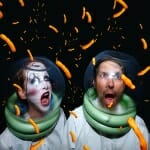 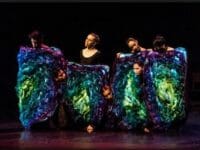 By now, a number of people should be going through Fringe withdrawal as the wild, 11 day event folds up its numerous tents and stows them away until next year. This year’s San Diego International Fringe Festival spanned 36 venues with over 20 shows a day and hundreds of people streaming between the various spaces from midday to almost midnight.

The second week of performances saw a number of strong performances and a variety of works in progress. “Todavia” by Hernan Del Riego and Co was one of the standouts. Listed as a bi-national show, “Todavia” (“Still”) was a cabaret-inspired commentary on the condition of being Mexican today. The musicians backing up Del Riego were superb. While many people love Lila Downs’ version of “La Llorona” (“The Weeping One”), you haven’t really heard the resignation, simmering anger and mourning the song can contain until you’ve heard De Riego’s version.

The Circus Collective of San Diego presented a very similar collection of acrobatic movements ranging from ropes to ribbons to rings. While charming, their act felt more like a group of high schoolers happening on a jungle gym after an afternoon of partying down by the river. Few of the rope sequences were that polished with the women playing it much safer than the men who had a few erotically-tinged moments on a ring- limbs were loose, gestures were too lackadaisical. And when the audience went wild over someone merely doing a swan balance on someone’s feet, it was clear the audience hadn’t been taught tumbling in school where they would have learned much of what was in the performance in gym class.

With New Orleans so prominent a theme in this year’s Fringe, a sort of homage to the 10th anniversary of Hurricane Katrina, one of the best spoken word acts was that of Claire Christine Sargenti who wrote “Interludes,” a piece that surely deserves its own podcast. Sargenti interwove the stories of 12 disparate characters from a priest to pole dancer to the characters in between, changing voices and small costume details with impressive dexterity. So compelling was the story, that when Sargenti hit its tragic climax, the audience sat in shock for a moment before she whipped them around for the finale.

Dance, too, was a big part of the Fringe. From dark to daffy, there were a wide variety of companies vying for attention. “Men and Juliet” from Emanay Productions in Del Mar, made interesting use of the space above the Spreckel’s Theatre. Based on Tanztheatre that combines drama with dance, “Men and Juliet” told the story of Juliet as she moves through her life. Spread over several rooms, the production brought the viewers along as minor cast members, almost voyeurs. While both the dancing and the acting were focused and spare, it was a piece that brought together concepts of space and movement in a way seldom seen on the San Diego Dance scene.

Another group experimenting with interesting combinations is Sabor Andaluz San Diego. In “India Andaluz,” the troupe paid homage to Flamenco’s Indian Classical Dance roots while pointing out the intense similarities in footwork and positions. The result was a fiery, exhilarating mix of both Flamenco and Indian dance numbers with fabulous costuming, including Bollywood, that brought many audience members a new understanding of Flamenco and exposed them to a side of Classical Indian dance they may have never seen.

By far one of the most innovative and visually challenging dance troupes to watch came in from Mexico City. Nemian Danza Escéncia created “Dreams and Temptations” based both on a collective poem written by the dancers and surrealist imagery from Magritte, De Chirico and Dali. The result was a rich performance with dark notes, as characters moved from creation to confession to catharsis.

One of the best acts to finish out the Fringe was “Los Dorados” (“The Golden Ones”). Set in the time of the Conquistadors coming up from Baja California, it’s an excellent segue into the few months remaining before Fr. Junipero Serra, the Franciscan priest who set up the mission system, is canonized in September. Funny and irreverent, chances are that this is not the California history taught in California schools. As Teatro Máscara Mágica from Chula Vista points out, the local Native peoples had their own ways of doing things before the Spanish starting naming everything after themselves.

Like many festivals, the San Diego International Fringe Festival hosts an awards show that includes critics’ choices as well as audience choices:

Those who were recognized:

Best of Fringe : “Save My Soul,” Wingrove Studios

Spirit of the Fringe (Tie): “Big Shot The Musical” and “Beats Without Borders”

Outstanding Comedy: “Scenes from Mars One: Now With 68% Less Gravity,” Mars One Productions

The whole San Diego International Fringe crew should include themselves somewhere on that list. Run primarily by volunteers, the three year old festival ran relatively problem free, with a smoothness some of the more established festivals in San Diego would envy.

But, as they say, the show must go on. Even as this year’s Fringe is getting packed up and put away, someone, somewhere is planning for next year.