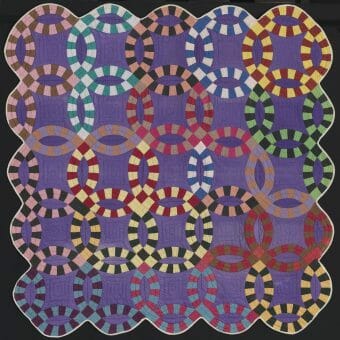 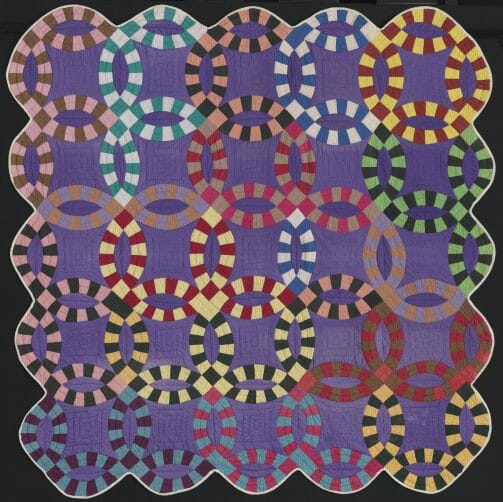 The Colors Among Us: “Quilts and Color” at the San Diego Art Museum

They lie at the foot of the bed, slouch over the sofa, languish in deep drawers. They seem humble, maybe even antiquated- a message from an earlier time from hands that held no cellphones.

If you had a quilt in your childhood, can you remember its colors?

Chances are, you probably didn’t give it much thought, unless it was something so special, no one was allowed to touch it.

The San Diego Museum’s new show, “Quilts and Color,” is opening up that memory box, challenging us to give that old quilt a new look.

“The show is a look at something we tend to take for granted,” says Ariel Plotek, Assistant Curator at the SDMA.  We tend to see other cultures’ art as all of one piece, Plotek explains, from simple domestic objects to grand scale carvings and group them as such in collections labeled South Asian, and so on. However, Plotek adds, we don’t seem to regard U.S. handmade objects in quite the same way.

The SDMA’s new show is “ a way to see the work,” says Plotek, a way of elevating what seems to be everyday, to a sense of art.

The collection currently on display is on its third leg of a three-city tour before it returns to the Museum of Fine Arts in Boston, where it originated.

The quilt show is part of a collection of quilts gathered over five decades by artists Paul Pilgrim and Gerald Roy who purposefully sought out the most striking pieces of quilt making ever since they saw their first antique quilt in 1969. The pair went on to amass one of the most important and striking collection of American quilts, with choices, based in part, on Roy’s study of color theory of painter, Josef Albers.

The result became a complex, vibrant collection of antique and vintage pieces that seem to anticipate the art movements of the later 20th century.

According to Plotek, the SDMA was very excited when the museum was offered the show. Not only has the show itself been enormously successful everywhere it has shown, but it dovetails nicely with the Mingei’s recent show, “Self-Taught Genius,” which featured a number of quilts, many from the South of the US.

In addition, the American-made textiles tell a similar story to the textiles in the SDMA’s other galleries- the use of the everyday elevated to art by often anonymous craftsmen, or women in this case, working to create something both useful and beautiful.

The forty-five quilts in the SDMA show are stunning not only for their design, but also for the vibrancy and imagination of the color combinations. Set against discrete grey walls, the quilts pop. And in some cases, vibrate, undulate and swirl, depending on how the optical illusions in some of them play out. Crafted by mostly Amish and Mennonite women, the quilts are high examples of home craft, often created as gifts and gestures of goodwill out of available cloth, leftover fabric and, in some cases, discarded clothing.

The earlier quilts feature no patterned material as part of the Amish belief in plain living while later Mennonite quilts use printed cotton with patterns still familiar to our eyes.

“It’s amazing,” says Plotek, pointing out a tumbling blocks pattern which looks for all intents and purposes like a stitched illusion by Escher.

Most of the quilts are unsigned, Plotek says. “I’m confident most of them are by women,” as quilting was considered women’s work in most rural communities.

The colors in many of the quilts are bold, the patterns complicated. Deep violets lie against inky black rectangles. Look closely and you’ll see patterns both in the fabric itself and incredible designs like swirls and tulips worked throughout the quilts. Darks intermix with lights, gradations of one color dominate some quilts while in others, the patterns seem reversed, almost deconstructed.

Plotek says one of the shows’ great visual pleasures is the surprising sophistication in the patterns and colors and the almost Op-Art modern look to the pieces.

“Done by people with no training in color theory, it’s surprisingly intuitive work, “ says, Plotek, “as sophisticated as what starts appearing in the U.S. in the mid-century.”

According to Plotek, much of the top sewing of the patterns could have been done on a trestle sewing machine with the intricate stitching between and over the blockwork done by hand.

Several of the quilts include complicated applique work, or work laid on top of a surface and hand sewn and embellished as in the magnificent Star of Bethlehem/Pomegranate quilt with its beautiful renditions of the ruby fruit.

Although most of the pieces in the show are technically quilts, Plotek points out several such as what appears to be a child’s blanket, which are actually comforters. According to Plotek, the quilt involves stitching or quilting, that goes all the way through the batting or interior stuffing to the back while the comforter is often embellished with little tufts of thread without through stitching.

Another amazing element in the show is the state of the quilts themselves. While some have some fading indigo or shattering of silk elements, most of the quilts look pristine, unwashed, Almost as if they were completed last week. In fact, the majority of the pieces are more than 100 years old, with one of the earliest dating from 1840. The latest, 1940, is a stunning scalloped quilt by an African-American from Mississippi.

While the show is divided into color schemes and themes, the quilts are tied together not only by their origin, but also by their symbolism. Far from being simple stitch work, the quilts also have their stories to tell. The popular “log cabin” pattern, for instance, includes strategically placed blocks of red for the house and yellow for the welcoming light in the window. As for the double wedding ring pattern quilts, look closely at the running designs and you’ll see the quilter’s good wishes for the new couple.

If you’re interested in taking a closer look or even trying some color combining or quilting yourself, the SDMA has a number of companion activities.  Family Drop-In Day, (July 3), with activities exploring color, “Painting on Tap” (July 23) combining art, beer and inspiration, and a free film, “How to Make an American Quilt,” August 1.

The SDMA’s “Quilts and Color” show continues through September 4, 2016.