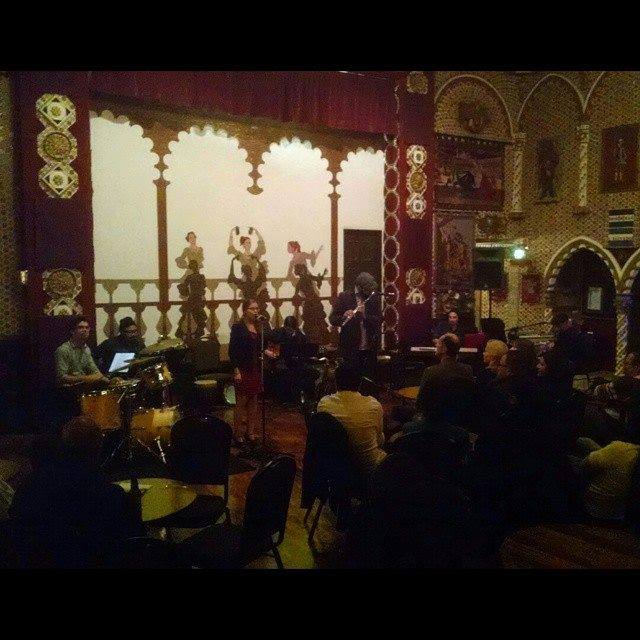 San Diego is full of little treasures- cool bookstores, a great happy hour, a new and unusual sound. The ensemble Dornob is one of those treasures, part of a quiet, below the radar trio of groups that work within the Persian (Iranian) music traditions to create a big, World Music sound.

According to founder Farhad Bahrami, the idea behind Dornob is not to create musical museum pieces but to put into practice the various aspects of Persian music from the classical improvisational style that requires an intimate knowledge of the seven dastgahs, or modal systems to the joyous and often raucous bandari, the highly danceable folk music with Arab influences.

Dornob and its various versions have been playing together since 1985 and now span at least two generations of musicians.

Their latest concert at the Tango Del Rey was one of wide-ranging repertoire meant to introduce concertgoers to their newest cd, Segah, named for one of the classical modal systems. Recorded locally in San Diego, the collective’s newest cd is what Bahrami terms music in the collective spirit of jazz.

Dornob was joined at the concert by special guests, the AfroJazMahalis (folklore via jazz) and Los Bandaritos (upbeat Arab influenced dance music), all extensions of Dornob, but each with its own specialty and independent musicians.

One of the most interesting elements of a Dornob concert, is the wide variety of instruments used, ranging from keyboards and fretless base to traditional Persian instruments such as the ney, a type of flute, and the qanun, a flat, stringed instrument similar to a dulcimer. While non-Persians would easily recognize some of the instruments, their ears may not since many of the Western instruments are tuned to a Persian scale or scales shifted by a quartertone.

December’s concert showcased the musicians’ versatility as they moved seamlessly from one style to another, some musicians coming in while others would sit out the set.

While Dornob started primarily with Iranians trained in music in Iran and studying in the US, the group has slowly expanded to included non-Persians such as Luis Valenzuela, Charles Weller, Jesse Audelo, Brian Repec and Harley Magsino.

“They come in for various reasons,” says Bahrami, “some for family connections, others out of curiosity.”

But it all works, says Bahrami, because he and some of the core musicians such as Mahmood Shamshiri, a ney player and vocalist, and Dara Baramodi, a qanun player, look forward to passing on Persian music traditions to a new generation, and collaborating with others because, at heart, Persian music lends itself to intercultural exchange due to its very nature.

According to Bahrami, Persian music includes traces of all who passed through Iran, blending it and bending it to create the unique sound the collective celebrates.

It’s not always easy for non-Persians to pick up the rhythms, says Bahrami, but there was no sign of hesitation or stumbling on stage at the Tango del Rey concert. Instead, there was a dynamic, energetic flow, made even more gorgeous by the haunting and ethereal voice of the special guest vocalist, Stacy Barnett and the energetic rhythms from Milad Jahadi on tombak.

Said one guest, used to Persian music, “you would think these young (non-Persian) musicians had been doing this all their lives!”

You can hear Dornob’s unique fusion and instruments in upcoming concerts at San Diego State University and venues such as Balboa Park. Concert listings are available on their webpage: http://www.cdbaby.com/Artist/Dornob.