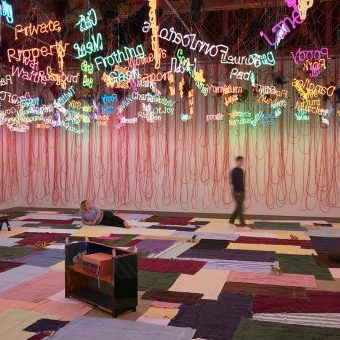 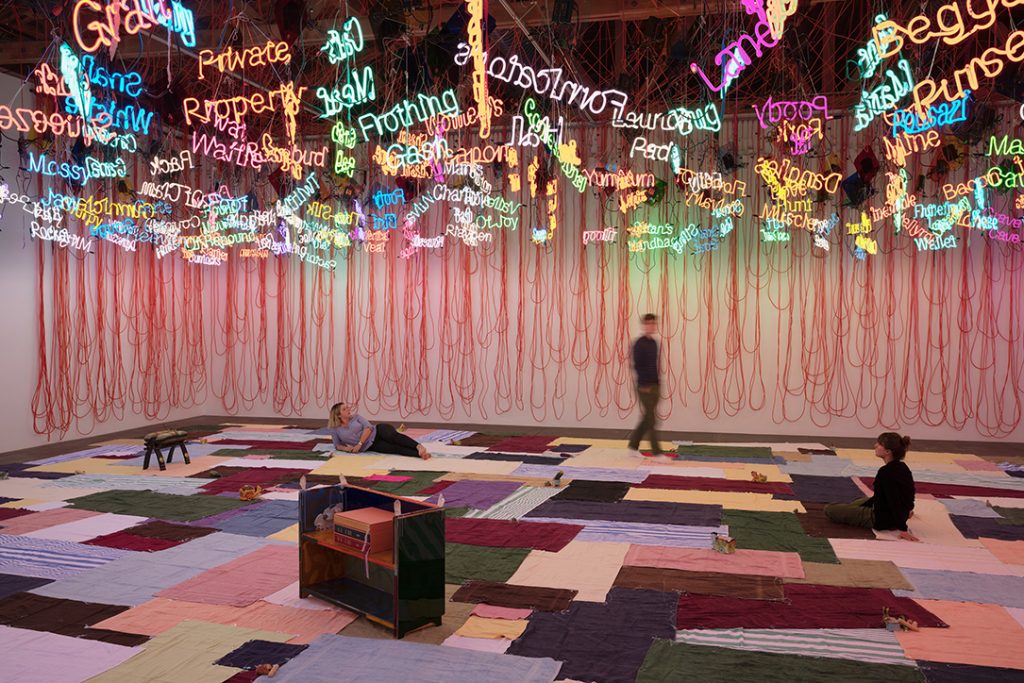 Exhibition through May 21st

Jason Rhoades’s artist legacy was sealed at forty-one years of age when he died unexpectedly –  at a time in life when most artists are only coming into their own.  At Hauser, Wirth &  Schimmel, Rhoades six separate sprawling room-sized installations (created between 1994 – 2006)  breathe life into his memory. He created these works ten years or more ago, yet they speak to timely current gender and racial politics, and our consumer culture. His work is bold and unselfconscious, pushing taboos aside to explore relationships of consumption to porn and sex using female genitalia as the symbolic vehicle for his creations. Swedish Erotica and Fiero Parts (1994) is his only work referencing the urban and cultural landscape of LA.  Tons of ordinary items, all in a unifying yellow color including cardboard, styrofoam, scrap wood, and more, are arranged to create sitting areas of small and large tables and chairs, bookshelves, including items of common consumption like rolls of toilet paper and reference Duchampian notions of the readymade.

In My Brother/Brancuzi (1995) Rhoades juxtaposes his brother’s bedroom with famous sculptor Brancusi’s studio, with photographs along the large perimeter of the installation as well as mechanical objects, a toy monster truck, mini-bike and an industrial style doughnut maker – all drawing connections to the mechanics of the creation of Brancusi’s sculpture. In The Creation Myth (1998) Rhoades sought to understand why, how and what humans create by exploring Creationist/Evolutionist theories. Large tables are stacked throughout the huge installation and large white buckets are used to identify and distinguish the brain, and mind, body and spirit. He uses a moving electric toy train engine with a toy stuffed snake on top as a metaphor for “train of thought”. Literally ‘smoke rings’ emerge from a machine, as a metaphor for a personification of the ‘spirit’ which is ephemeral. My Medinah, In pursuit of my ermitage…(2004),  is an installation created with tables, wood parts, photography-covered poles, TVs, buckets and more representing part mosque, part temple creating a place of religious seclusion.  Once again imagery of female genitalia float above the scene, highlighting political incorrectness, taboos, and hypocrisies. The Black Pussy…and the Pagan Idol Workshop (2005) was inspired by the intersection of commerce and religion, and the ancient pre-Islamic story of the Kaaba.

The installation comprises five core elements: Egyptian-made hookah pipes and paraphernalia, dream catchers, beaver-felt cowboy hats, a collection of ancient gongshi stones, and ultraviolet neon words depicting slang for vagina. This was this installation’s first time being shown.  Tijuanatanjierchandelier (2006), the most recently created installation prior to Rhoade’s death, raises questions about consumerism in relation to tourism using border towns Tijuana Mexico and TangierMorocco as examples.  With these cities, though 6,000 miles apart, Rhoades blends trinkets with chandeliers, incorporating 176 Spanish and English neon “pussy words” transforming the act of consumption into an adventure of global trade. Mixing the Moroccan and Mexican tourist trade forces us to look at cultural stereotypes tourism encourages. Prior to 2006, Rhoade’s work was widely exhibited in Europe, however this exhibition is the first comprehensive survey presented in his adopted city, Los Angeles. These complex installations are beautifully installed and the gallery provides the kind of massive spaces required to exhibit these mesmerizing mind-bending installations packed full of imagery, and cultural meaning.