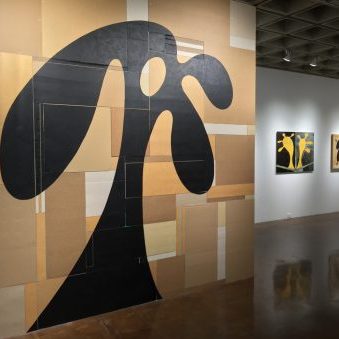 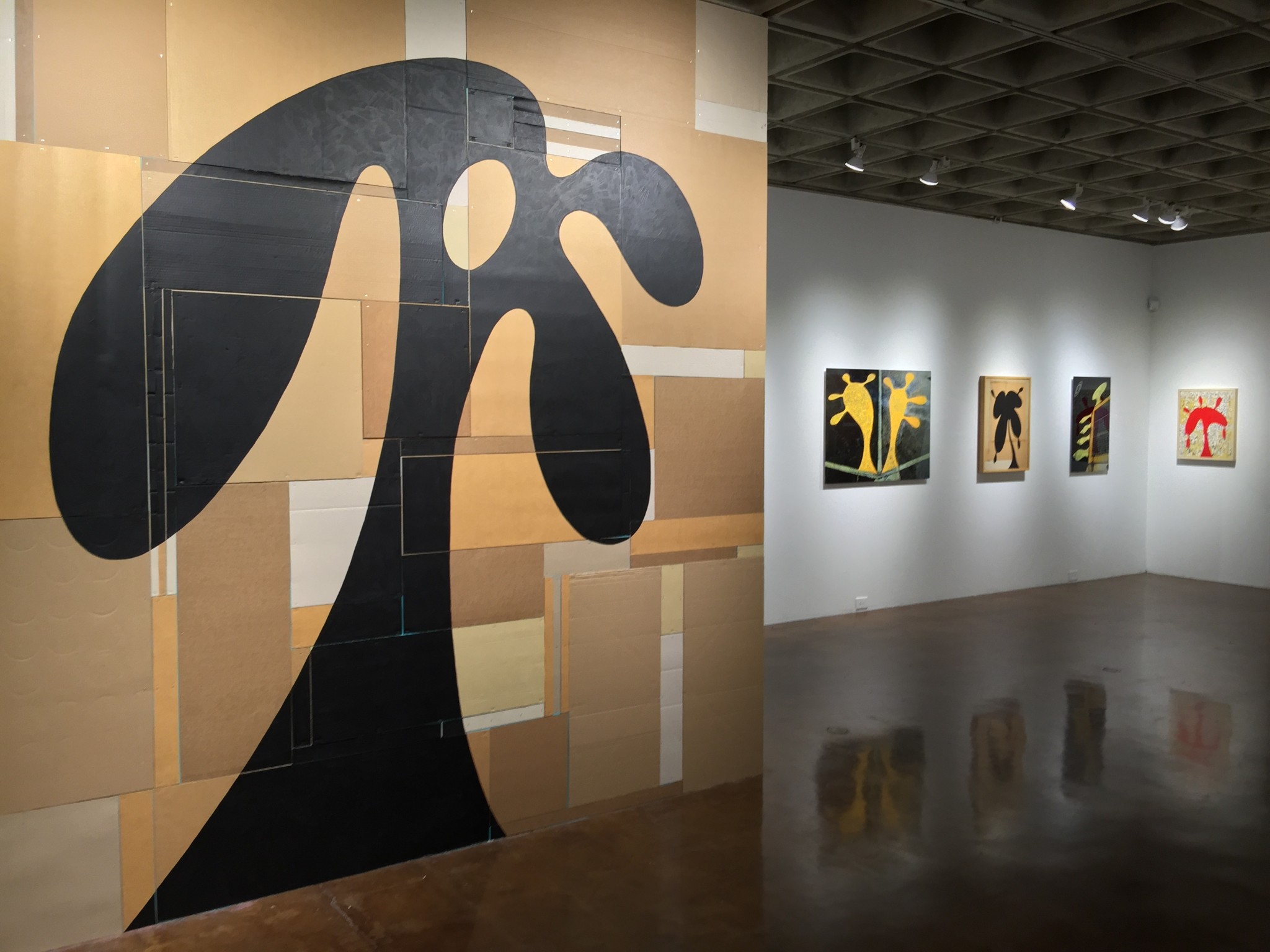 Oeuvre as Onion: db Foster Lets Some Of His Work Out.

Daniel Foster, or as he likes to style himself in some of his texts, db, is kneeling over some work he plans to layer on a wall in the Art Gallery at Southwestern College.

“See this piece?” he says, excitedly, “this one was a challenge to shoot.”

It is an interesting shot, printed on metal, of figures laid out on the ground and lensed from above.

Foster is moving around the picture, simultaneously explaining how he kept his shadow out of the shot and reliving the experience.

The piece is only one in a densely interwoven show of Foster’s work wrapping itself around, and in some cases, occupying whole walls of the high ceilinged gallery.

Look around, and what starts to stand out is bright colors, shapes like enthusiastic amoebas, layers upon layers of lines, spirals, folkloric shapes which seemed to have just dropped by, text, numbers, pieces of ephemera. It’s shiny, colored-tape, mixed surfaces, multi-textured.

Foster stands for a long minute in the middle of the gallery, poised between an installation he is completing for his solo show, “Outside In, site #2,” opening on Thursday, September 1st, and works that extend back several decades.

It’s a perfect, suspended moment, 30 years in the making, in which the tide of time stills for a brief pause, and you can almost hear the photos and canvases and collages murmuring and moving in their fames, reaching out to each other.

It’s an unusual show- few if any of the works have been displayed in public before.

“I have thousand of pieces,” says Foster. All stored, all housed in one-car garages, storage spaces that range across Foster’s life. All unseen, uncollected, undisplayed.

Until this year with a pop-up show in Solana Beach and now this.

For a moment he seems bemused at how MUCH work has slipped out of its quiet commune.

“I’m trying to get used to the idea of coming out,” says Foster. “After all, as an exhibitor, I’m only six months old…”

“You just can’t throw the kitchen sink on the wall, or can you?”

As a child, Foster was an unlikely candidate for the bohemian artist lifestyle. Child of an accomplished scientist father, Foster seemed destined for a standard life of solid intellectual achievement. He went to UCSD, later to USC, came back to San Diego and tapped into a creative entrepreneurial spirit inventing things.

And then Foster met philosophy, prisma colors, and in 1986 had an epiphany so startling, it sent him head long into a journey on which “I worked on the building blocks of color and nature and discovered God and Spirituality through the act of creation.”

Foster turned, as he likes to say, “Bohème,” and spent the next 30 years creating in a sort of Sufi-like isolation. His philosophy? “To live in the moment…I’m sure someone else said this…your life is art, everything else is secondary…” For Foster, that involved developing a deeply visual vocabulary that delights in dichotomy of color and line and plays along the same continuum as Basquiat, Keith Haring, Mondrian, and even Matisse.

Foster emerged briefly to study at UCSD’s Visual Arts Department, influenced in part by Italo Scanga among others, and moved on to an MFA at the San Francisco Art Institute, only to go back to self-contained art production.

Along the way, years of daily creation have helped Foster see art as a communion with community and a way to dialog with the world around him.

For example, the show includes medium-sized pieces created in 1996, based on strips of paper for each day of a chosen month as part of an exercise in the “daily meditation” of creation.  Each month is assembled in a frame, looking for all the world like an urban bricolage kinte cloth.

Other pieces feature exuberant amoeba-like forms, harkening back, perhaps to his UCSD days, while still others are photo documentation of recent “stealth” art.

Foster points to one- “ I figured I had 50 minutes to chalk (a design) and photograph it before my son finished his karate lessons.”

It’s as if opportunities for art, interacting with nature and urban settings are everywhere, just waiting to collaborate. Ephemeral, permanent, it doesn’t seem to matter. Foster seems charmed by the effects of the wind on the red dirt he used to create patterns on a beach he wanted to photograph.

“It’s like peeling an onion,” says Foster, noting that the show groupings reveal layers and explorations in his cicada-like process of artistic self-realization.

But like his work, Foster is nothing if not an interlocking series of dichotomies. Foster fell in love in his 40’s, eventually married, and found that a bohemian odd jobs approach needed a little bougie thrown in order to survive. No one was more surprised than Foster to find himself at the Riverside Museum of Art, as the Executive Director and then of the Oceanside Museum of Art. But even as part of the museums, Foster continued to develop the approach that art should be more about context than content.

In his opinion, art as content has been done. “The 21st century will be about content in context,” says Foster.

Once more, the bougie ceded to the bohème. ‘I felt a calling to be an artist instead of working for artists,” says Foster. So Foster went back to creating, this time, with the idea of possibly letting his work out to play.

Again, Foster has felt a shift in his work, perhaps coming from the fact he now has a young son, and thinking about what legacy and connection to the word he will eventually leave him.

And perhaps, in thinking of his son, Foster reflects on the nature of art.

“We’re born with pure eyeballs, but the system undermines the importance of art in daily life.

“We’re all fundamentally artists. What makes your wow for you?”

And Foster is off again, checking out how a piece looks for a certain distance.

Like the proverbial cicada, Foster seems to have cast off his creative isolation and moved into creating context with interactions with viewers. But the process, like the shedding of the shell, is still in progress.

He looks wistfully at a large canvas with a constellation of little canvases.

But he’s glad his work is out there, speaking to others just the same.

“I’m finally ready to manifest the vision (of showing his work) I have had in my head for years.”

Foster will be giving a talk on his artistic process and his work Thursday, 9/1 at 12 noon at the Art Gallery at Southwestern College. The show itself opens Thursday night, 5:30-8:30 pm., and runs through September 22. https://vanguardculture.com/91-db-foster-outside/