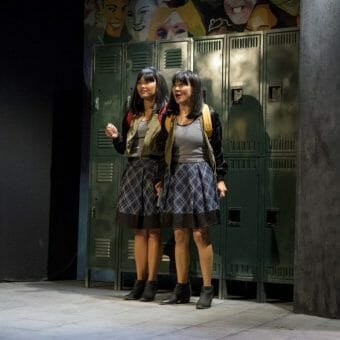 Under the luminous direction of Delicia Turner-Sonnenberg (Executive Artistic Director), Moxie Theatre brings us another vibrant and thought-provoking signature production.  In deciding which play would fill the spot of Moxie Theatre’s 50th production, Associate Artistic Director (and also current cast member) Jennifer Eve Thorn explained the reasons why they were drawn to peerless.  “The play itself draws upon an important piece of theater (Macbeth) and it fit into our own vision as a theater that is inclusive, diverse, smart, and women playwright-focused.”

Indeed, Moxie once again hits it out of the ballpark.  With peerless, the bar of our San Diego theater arts scene is elevated.  Moxie fearlessly brings to the stage what will be destined as one the literary treasures of the 21st century theatrical cannon from emerging playwright, Jiehae Park.

Park’s main players are identical twin sisters.  It’s set within the world of the American high school college applicant saga. We’ve all been there on some level.  Being accepted into college has become a monumentally uber-competitive struggle.  The stakes are so high: if I can just get into my first choice, then the rest of my life will be perfect. Park challenges our understanding of ambition, stereotypes, love and legacy. Park takes an over-achiever rite of passage and reimagines it within the plot structure of Shakespeare’s Macbeth.  The result is bold, imaginative and a much-needed perspective on the institutional nature of college admissions process in the United States. peerless becomes a referendum on the cutthroat and conflictive nature of what our culture has bequeathed to the once idyllic time of the teenage years.

In the hands of Turner-Sonnenberg, the playwright’s vision of a high school Scotland becomes a sensory and intellectual feast for the audience.  She understands that Park’s words require room to grow.  It’s an important directorial choice in a plot full of life-crushing elements: a heavy sky, love, rumbling motors, ambition and tree-nut allergies. It’s a duplicitous world where being one step ahead is a matter of survival.  Simply put, peerless is both delightful and disturbing. In my opinion, there is an inescapable allure of the idea of twins. The subtle nods to the Bard are fun and worthy of a high school English class field trip. From the red-spotted t-shirt to the schoolgirl outfits reminiscent of Kubrick’s The Shining to a perfectly executed Roger Rabbit dance move.  Comedy and tragedy are juxtaposed in the same way it would have been for those in the Elizabethan audience.

Dana Wing Lau and Jyl Kaneshiro’s work is effortless and symbiotic as the Midwestern Korean twins, ‘M’ and ‘L’. They are co-conspirators in a devious ploy to succeed. In spite of this, you will root for them. After all, they are fated characters destined to play out what Dirty Girl (Jennifer Eve Thorn) has foretold. As the Three Witches character, Thorn channels her inner Goth Girl and moves with perfect comedic timing and predatory command. Lau’s ‘M’ is sympathetic and nuanced. The spark of internal conflict is both dynamic and contained. The Macbeth-inspired character in Parks’s play rightly demands the perfect woman-behind-the-woman version of Lady Macbeth and Kaneshiro lands it in a delicate balance of ruthlessness, compassion and cunning only fit for an all-consuming queen.

The Over-Achiever. The Unexpected Leader. The Socially Awkward Nerd. The Jock Boyfriend and the Rebel. The play revisits these social staples of high school Americana. If not done right this could have been one of the play’s downfalls. One of the most effective themes of Park’s work is how it challenges the present day reality of the American high schooler. The characters of BF (Vimel Sephus) and D (Justin Lang) are exquisitely cast and their vulnerability makes us nostalgic for corsages, high school sports and VHS tapes. One of the beautiful things about William Shakespeare’s Macbeth is that it transcends time. His works have provided a stage to revisit, reinterpret and make them our very own. It may take place in Scotland but you will always find at least one universal theme pertinent to any citizen of the human race. It’s the reason why his plays are revered and reproduced. Patronage was vital in Shakespeare’s time. Do yourself a favor and go support a play that will endure “to the last syllable of recorded time.”