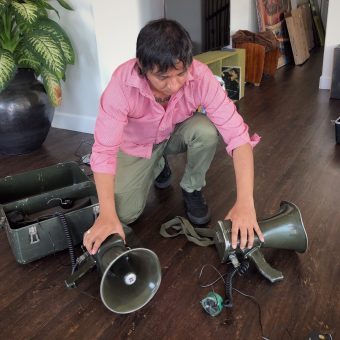 “Rock music is very limited—guitar, bass, drums, that’s about it,” says sound artist Francisco Eme, explaining why he grew tired of producing with underground rock bands in Mexico City. He moved to the United States four years ago, jumped into the art scene and recently became the director of The Front Art Gallery in San Ysidro while working on his love of “noise”.

Sitting at his computer table placed almost in the middle of the back bedroom in his home, Eme is surrounded by a piano, a xylophone, an antique harpsichord, and all manner of microphones and speakers, with acoustic tiles placed here and there on the walls. He discovered sound art while making sound and music for theater productions. “I realized I could use anything to make sound. My palette became wider.” As he explored making “noise”, he became more sensitive. “With sound art you are learning to listen again, in a different way,” he says.

On his computer, he pulls up a sound piece he created about police brutality. Excerpts from songs in Spanish and English mix in with sound bites of sirens and a cacophony of other unsettling noises. After we listen for a few minutes he grabs two small green suitcases, opening each with care, and lifts out two megaphones from the Vietnam War that he used to broadcast this sound piece during his residency at Bread & Salt earlier this year (2019). “They’re so loud! I turned them all the way up and hurt my ears,” he says, smiling sheepishly, tacitly admitting his innocence to the soundscape of war with which these instruments had to contest. The bent, dinged-up and misshapen metal flutes made us muse about what they had been through. War scenes rattle in the back of my mind and I shudder, knowing these movie-generated images are a far cry from the true horrors of war. The megaphones are a thoughtful addition to his piece. They imbue the cacophony of America’s decades-long urban war with the same terror.

His cat Dorodea wanders through for a few affectionate strokes from Eme and then couches herself in the window to watch a lizard sunning itself on a rock. A silver flute sits on his table next to the computer which prompts me to ask if he plays all the instruments in his studio. He shrugs his shoulders and says no but then gives me a rambunctious demo on the Xylophone and then plays a little tune on a beautifully decorated old accordion that he says needs some love. He opens the top of the antique harpsichord and plucks the strings like a harp which sounds like an eerie moment in an old horror movie. Switching to the beautiful ebony keys, he plays a lovely antiquated piece before throwing his hands up and says “I love it! I love the black against the white keys in the opposite way of a traditional piano!”

Walking into the hallway, Eme bends down to plug in a lightbox stacked against the wall with other text-based pieces in “Spanglish.” He explains, “In Mexico City, it’s not OK to mix in English. If you throw in an English word people will say, ‘Why are you using English?!’ When I first came to San Diego and someone would say, ‘You know, hermano [‘brother’ in Spanish],’ I was fascinated by the intermixing of the languages, so fascinated that I started to record it.” He explains that in this border region Spanglish exists because it is an efficient way to use both languages, depending on what is easier to pronounce or more efficient to get the point across. The lightbox is lit up with a mixture of English and Spanish sentences broken up and reassembled depending on the font and color. This work highlights how each piece of the sentence can be reassembled depending on what is more efficient to say for the Spanglish user.

Another piece shows English verbs with Spanish verb endings, a mixing of the two languages that Eme calls “hybrids.” Common English words like trip, park, map have been matched up with the modified Spanish verb ending “e-ar” to demonstrate how easy the transition is to “Spanish-ize” an English word. With his billboard approach, many Spanglish speakers said he was, in a sense, teaching Spanglish, which amused them but they appreciated it. “Many times they don’t know [when they are using Spanglish] because they live it. It’s OK! It’s great!” he says.

Since time immemorial, languages have continually evolved as countries’ borders morphed and people migrated. I imagine people experimented and found creative expression by importing into their vernacular a foreign word from a new land or hung on to a word from their mother tongue that a new or dominant language just didn’t satisfy. I emailed Eme to ask if there was a verb in Spanish that he could appropriate for English. I used the example of the Spanish verb estrenar, “to wear an article of clothing for the first time.” We all know that feeling! A few years back I started saying I was “estren-ando-ing” a brand-new dress or pair of shoes. What a great verb! Why don’t we have that verb in English?

Eme wrote back: “Spanglish goes in both directions; the other term is ingleÑol (ingles + español). You can add ‘-ing’ to the end of [present progressive conjugated] verbs in Spanish and it’ll work too.” He used the examples of loque-ing (freaking out) and chamb-ing, which he says comes from chamba, a Spanglish word for working. He also corrected, in proper Spanglish, my rendition of my favorite verb by omitting the ‘o’ to produce estrenand-ing. Now I must decide which to use…!

Eme is a consummate “noticer.” The quotidian soundscape of life captures his attention and his bricolage of sound bites and language bring a new meaning to “noise,” allowing listeners of his work a moment to re-experience the sounds of urban life as if for the first time.

To learn more about Francisco Eme and The Front Art Gallery visit: