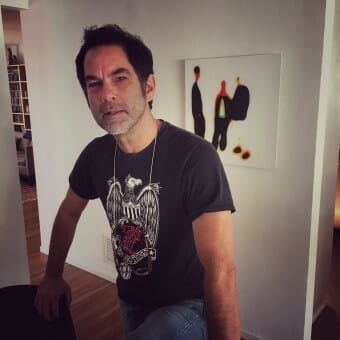 Standing in his kitchen, Perry Vasquez pours me espresso from his old stovetop espresso maker. We chuckle over the show Portlandia once he finds out my hometown is Portland. He wants to know if there’s a kernel of truth to the how the show portrays Portland.  I can’t help but admit to him that the kernel isn’t that small. When asked about his personal history with art, he becomes very thoughtful and begins with his formal education and his disillusionment with academic art in UCSD’s MFA program during the 80’s. The professors focused exclusively on abstractionism, completely disregarding any traditional painting techniques or methods. In the spirit of casting off old ways, terpentine was used liberally, and the fumes started to give him respiratory problems, effectively ending his painting career. It wasn’t until 2005, at a Dali retrospective, that his interest in oils was reignited. He decided to start applying himself to the task of painting in a more traditional way, enjoying the challenge of representational art’s layering of under-paintings. Starting with collages made from snippets from magazines and popular culture, he weaves together intricate imagery, taking themes from mythology, history and pop culture. Once he is satisfied with a composition, Vasquez transfers this to canvas through various mechanisms and then begins the task of painting the imagery with traditional methods. 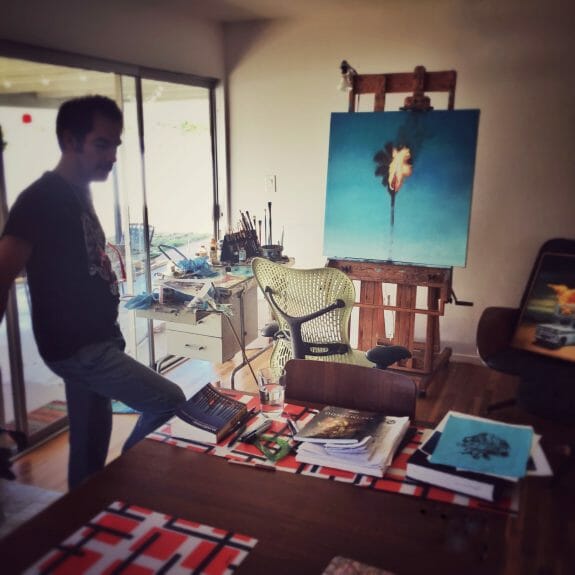 (The Artist in his dining room/studio)

As we talked, a theme kept resurfacing that I realized had a deep meaning for him. In 2007, he took a 10-day workshop with the wildly passionate performance artist Guillermo Gomez Peña. Something about Peña’s extreme expressionism grabbed him and he dived into the performance art community. After spending several years co-creating and experimenting with the performance group Border Corps, he found he was moving towards working solo.  During the two years it took to paint The Gates of Heck, he spent many contemplative moments in the studio on his guitar. This became a 50-minute performance piece for the public opening for the painting, and now his guitar has become a significant part of his performance pieces.

Currently, Vasquez is collaborating on a project with Peña. The two artists are working on a deck of flashcards to help relieve artist’s block, effectively giving the artist a poetic license of sorts. Each card poses a question or statement meant to pull the artist’s mental focus out of its rut and into new territory it might not have gone to on its own. The aptly chosen name for the project, “Movida Rasquaches”, in current usage means something along the lines of “Jimmy rigging,” or to “MacGyver” your way out of a situation. This new project is sure to be a fascinating collaboration with many twists and turns.