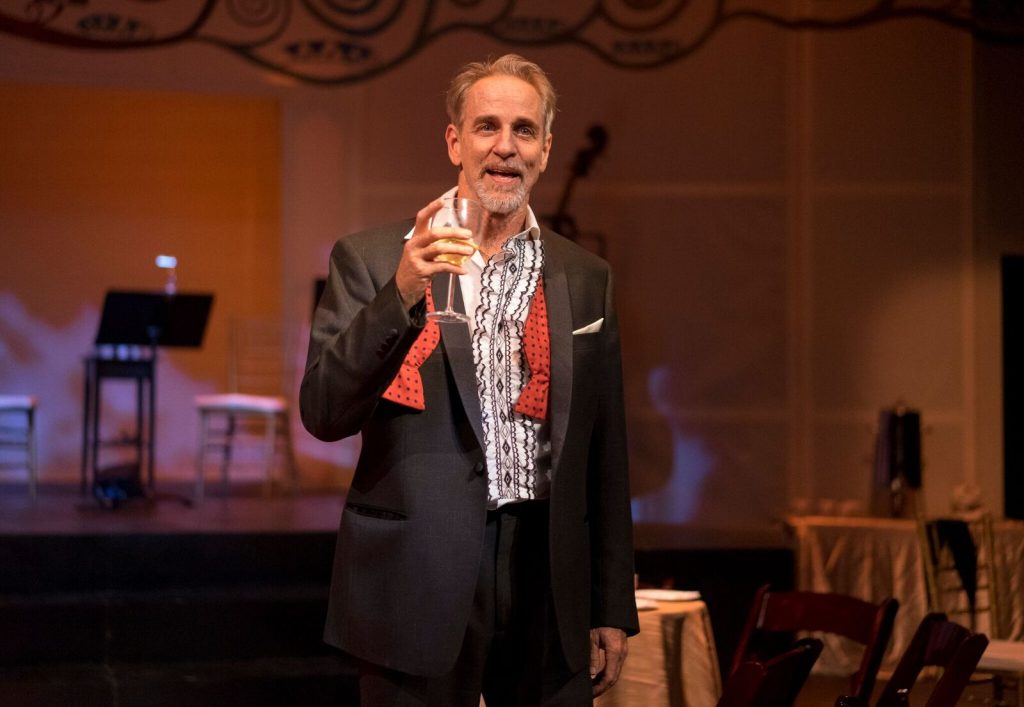 Proposing a Toast: The Dybbuk of Hannah and Sam’s Wedding by the San Diego Repertory Theatre

The Dybbuk of Hannah and Sam’s Wedding is a Jewish metanarrative of an exorcism that combines the comic sensibilities of Henny Youngman, the haunting urgency of Allen Ginsberg’s Howl, and shout outs to Barbara Streisand. That’s right.

The San Diego Repertory Theater’s current show is a playful demonstration of the ways in which we are connected to each other—and each other’s theoretical and emotional baggage—across temporalities and generations. The only official cast member, Ron Campbell, brings Uncle Jerry, the eponymous tale spinner and tortured soul (in Jewish folklore, a dybbuk is a disturbed soul who unable to move on inhabits the body of another until exorcized) to life while accompanied by a set of klezmer musicians expertly led by local pride Yale Strom.

The show functions as somewhat of an endurance test, both for Campbell (I assume) and occasionally for the audience. While it’s nice to be at a wedding where the disturbed soul isn’t you on too many dirty martinis, it’s hard to pull off time travel in wedding toast, which Uncle Jerry’s 90-minute monologue ostensibly is.

Still, there is a spectral beauty to The Dybbuk, not least in the sparse and deliberate work of Scenic Designer Giulio Perrone and Lighting Designer Sherrice Mojgani.

Where the comedic side of the play is concerned, the warm up act has to be the wedding video that transitions us into the wedding at which everything unfolds. It’s a deliberately hackneyed photomontage of the bride and groom that looks like every other wedding video you have ever politely sat through: here’s the happy couple on a beach, here they are under a canopy, here they are under a canopy on a beach. Its uncanniness got more than a few laughs.

What drives the action in Dybbuk is an abiding need to attend to the past as we look toward the future. In a program note, Larry Alldredge (Managing Director for the SD REP) extends a similar call: “As each of us pause[s] and take[s] a deep breath to process the impact the election has had on our individual and collective psyches, I find myself contemplating the role in helping to create the world we’d like to achieve.” The Dybbuk is about, among other things, our interconnectedness. Something to think about as we move forward, indeed.