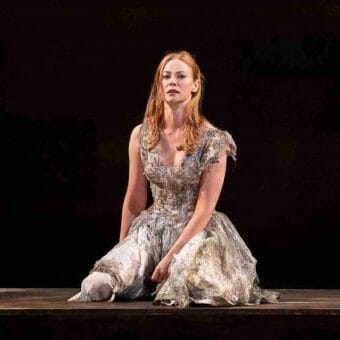 “I am ashamed that women are so simple /

To offer war where they should kneel for peace.”

This line is found in one of Shakespeare’s longest monologues, delivered by the finally-subdued woman at the ‘happy ending’ of The Taming of the Shrew. The monologue and entire show are infamous to the point that many theaters will no longer mount the ‘problem play.’

The story generally ends with the bombastic Petruchio domesticating the wild Katherine – through mental and physical abuse – to her supposed benefit. Some theaters soften the manhandling, others change the ending; many directors set the show in the past to avoid condoning the misogyny. Director Shana Cooper reinterprets the message entirely in her production currently running at The Old Globe Theatre.

“I am ashamed that people are so simple /

To offer war where they should kneel for peace.”

Cooper’s shrewd Shrew swaps ‘women’ for ‘people’; suggesting that a successful marriage requires both partners to surrender power to the one they love. This subtle shift is echoed through the entire show, with an empathetic Petruchio who is lovestruck on sight and unconventionally woos – rather than gaslights – his bride.

Regardless of agreement with the change or sentiment, the standing ovation at last night’s performance proves excellent execution. The three-hour run time (including one intermission) flew by thanks to the high-energy storytelling, dynamic staging, and use of modern music.

Cooper and Alaine Alldaffer receive my greatest admiration for their casting, especially in the supporting roles. John Tufts, who plays Hortensio, Biondello, and Merchant, is a stand-out star. Cooper takes the common double-casting trick and Shakespeare’s mistaken identity trope so far that Tufts is (hysterically) forced to make on-stage costume changes in order to accommodate all three of his roles.

Casting Jesse J. Perez as Gremio was a stroke of genius. Juxtaposing the young lovers and suitors with a spry older gentleman provides opportunities for commentary on the patriarchy and delightful physical comedy. Perez is the Craig Noel Distinguished Professor and Program Director of The Old Globe and University of San Diego Shiley Graduate Theatre Program and delivers a masterclass on comedic timing and movement.

University of San Diego’s Shiley Graduate Theatre Program provides contagious energy. This is not Cooper’s first time staging Shrew, but it feels fresh in part to her resourceful use of the young ensemble and their musical talents.

As always, Paul Peterson’s sound design is aces. Outdoor staging of Shakespeare can translate to lost sentences, but every syllable and song was clear thanks to articulate actors and his expertise.

The Old Globe’s mission is to preserve, strengthen, and advance American theatre; it hits the target on all three aims in this high-caliber, revitalized, and hopeful interpretation.

The Taming of the Shrew opened on June 11 and will run through July 10, 2022. Tickets are available at www.TheOldGlobe.org.