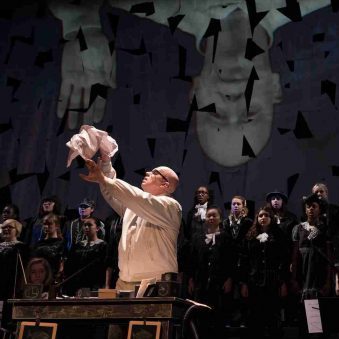 Sometimes life presents itself as a subway ride, with each stop serving as a rigid checkpoint. Sometimes it seems I’ve bought a metro pass for an amusement park ride instead. Twists, turns, and the occasional corkscrew turning my reality on its head. Aging Magician, presented by San Diego Opera, illustrates this crazy train by telling the tale of Harold, an aging clock maker in the twilight of his life. As Harold, played by Rende Eckert, struggles to understand the meaning of life and death and to complete a pivotal part in his children’s book, “The Aging Magician”, he finds himself in a place of mysticism.

This Opera is no still-life art exhibit with only vocals to appreciate. The creators have joined forces with producer, Beth Morrison Projects (BMP) who, “gives a voice that doesn’t yet exist for the work we are doing and lets the project take it’s form” notes co-creator Paola Prestini. According to Beth Morrison, BMP was founded with “the express purpose of changing the way that we see Opera and a desire to bring unique stories with a major focus on composers of color and women composers.” Morrison encourages an unconventional and imaginative mindset for pieces of work to flourish and expand what the vision of Opera can be. Morrison has a goal of revitalizing the true understanding of Opera. “The 21st century form of opera is a return to melody, harmony and structure that has allowed audiences to reengage with opera as a form of living art” she notes. Aging Magician certainly fits the bill, as our perception of Opera will be challenged as much as Harold’s perception of mortality.

Creators Julian Crouch, Rinde Eckert, Paola Prestini and Mark Stewart have breadcrumbed parts of themselves into this magical piece of opera-theatre set along various New York train stops. These stops illuminate morsels of Harold’s life and culminate to a wondrous afterlife in Coney Island. Julian Crouch’s set acts as a musical instrument in itself, which plays in tune with the Attaca Quartet and Paola Prestini’s roller coaster of an orchestra.

Harold is shepherded along his final journey by children as he explores the magical mundanity of his life. Prestini elaborates how “children can sometimes teach us more about mortality and death because they are less afraid.” Age has always been a symbol of wisdom, but maybe more credit is due to the moments of clarity a child’s simplicity can offer to an adult’s overcrowded mind. This theme is revealed in a uniquely powerful way with the partnership of The Brooklyn Youth Chorus.