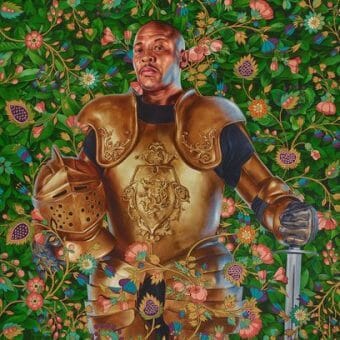 Beginning on January 30th, LACMA opens Artists Inspired by Music: Interscope Reimagined, an exhibition generated by the Los Angeles record label Interscope in collaboration with LACMA Associate Curator Staci Steinberger, on the occasion of their 30th anniversary highlighting some of the most famous and grammy winning musical artists of recent generations.

As Interscope co-founder Jimmy Iovine commented: Interscope’s original mission was to find the most profound artists, empower their creativity and watch what happens. We wanted to continue that vision by assembling the most admired visual artists and empower them with that same creative license to honor the musical artists we have worked with for over three decades.

Throughout art history artists have cited music as a source of inspiration, capturing the rhythm of sound through color and form and transforming music into their art. The 20th century Russian painter Wassily Kandinsky translated the music he heard into rhythmic oil and watercolor paintings through the use of line, color, texture and shape.

LACMA’s CEO Michael Govan comments: There is a long history of record album covers being designed by visual artists. As an institution that has long explored the intersection of art and other sectors, including design and music, LACMA has been collecting record album designs over the past several years, and it’s inspiring to see these artists reinterpret three decades of iconic contemporary music.

Also collaborating with this exhibition is Snapchat who is providing AR experiences that allow visitors to hear the music they view along with the artworks. The artworks from a diverse group of artists are responding to albums and songs from some of the record label’s biggest and most influential groups, rappers and singers.  The show runs only 2 weeks through February 15th. Local ABC Channel 7 shares a short video about the exhibition HERE.