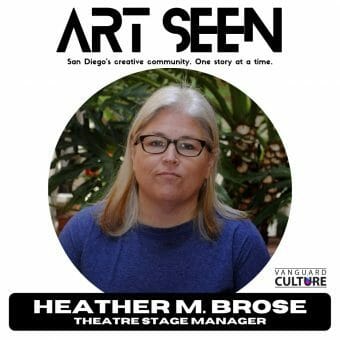 Heather M. Brose is the woman you want in your foxhole. Calm yet creative under pressure, funny as hell, and able to efficiently organize an army. She’s powerful enough to make everyone sit up and listen, yet empathetic enough to sit down and listen too. This skill set is why Brose is one of San Diego’s finest theatrical stage managers.

After agreeing to chat about herself and her profession, my first question was “what do you want our readers to know?” Brose leaned closer to the recorder to say: “someone in this town needs to produce Our Town and hire me.”

Brose wasn’t joking about Our Town – it is one of her favorite plays – but was joking about it being the most important thing she wanted to share. She champions diversity in off-stage hiring to match the levels theatres put within casting:

It is no surprise that Brose is a firestarter regarding progress within the industry as she has long gravitated toward forward-thinking new works. After graduating with a bachelor’s degree in theatre from The University of Kansas in 1997, Brose visited New York City where she saw four shows in three days. One of them was a then off-off-Broadway production of Paula Vogel’s How I Learned to Drive.

“I left that show and I said: I am meant to do this.” ‘This’ being: dedicate her career to the theater.

Brose’s first job was a production assistant at Unicorn Theatre; “where I worked 60 hour weeks for a-hundred bucks a week.” The 1998-1999 season included Vogel’s How I Learned to Drive and “again, it was like, yes, I am so meant to do this.” This was another sign to make the jump and move to Los Angeles.

While building her theatrical resume in Los Angeles, Brose worked a full-time job too. She jokingly called herself a “99-seat queen” based on her time in medium-space theaters that produced several new works.

In 2007, a production of Menopause: The Musical brought Brose to San Diego where she continued deepening her understanding of the artistry of stage management. Since 2020, Brose has served as San Diego Liaison delegate to the Actor’s Equity Association, the union which includes 51,000 stage managers and professional actors in live theater. As recently as 2021 was the first AEA convention, which included several new resolutions which Brose helped on the wording of seven, regarding stage management. This task was a tough and delicate matter considering the sweeping definition of the ever-important role.

Anyone who has worked in this industry can think of dozens of little tasks performed by Stage Managers which are not are included on that list, as the job can change from theater-to-theater and even production-to-production.

“Honey, even we can’t agree [on the job description of stage managers.] For instance, I believe one of my biggest jobs is maintaining a show while other stage managers might think it’s farther down on the list.“

I did not understand the concept of maintaining a show, so she explained: “Once a show opens, the director leaves. My job is maintaining the artistic integrity of the director’s vision all the way through for the closing night audiences. That is why [as a Stage Manager] even when the director doesn’t think you’re listening, you need to be listening; that’s why the stage manager always has to be present. Even for designer meetings. In the rehearsal room, I’ll write down certain phrases the director says while coaching an actor. If an actor starts making their own choices two weeks after opening, like adding pauses or speeding it up, I gotta clock that. When I do, I use the director’s own words to get the show back on track. There’s an art to that.”

This led to an interesting distinction that even stage managers debate among themselves. Is the role an administrative and technical role, an artistic role, or all of the above? Heather leans toward artistic, but explains it carefully, “Like, when I call a blackout of the lights. A split-second early or late makes a difference with how the moment lands for the audience.” There’s art in that too.

The many parts of a Stage Manager’s role expand to include administrative e-mails, physically setting a rehearsal room, mediating off-stage drama, ensuring union and labor laws are followed – just to name a few. Brose expressed the incredible intimacy in healthy productions and the importance she places on maintaining an environment of dignity for her actors, technicians, and everyone in between.

In the same token, Heather protects her mental health and time with loved ones. Burnout is an epidemic in the performing art industry and her successful decades within are in no small part due to priorities.

“I remember turning down a show so I could go to my niece’s graduation. I told [the theater] during negotiations, I couldn’t make a performance. They said, ‘we’ll have to pass and hire someone else’ and I said, ‘fine’ because my niece was going to remember if I made it or not. And that matters to me; family matters to me. Theatre matters to me, but it’s important to remember it’s a job and the best way I can be good at my job is if I have a healthy life outside of work too.”

Brose repeatedly referred to stage management as her job and urged me to tell all aspiring stage managers (though the advice extends to artists of every medium) to prioritize their life outside of art.

At the same time, Brose’s dedication for theater is apparent; especially when she spoke to the pandemic shut-down being the longest stretch of her adult life without a show and the extraordinarily painful void found in waiting for live theatre to return.

While it seems impossible to truly define the myriad of hard and soft skills required in a great stage manager, this much is true: a stage manager is the heartbeat of a production. Are Heather Brose’s initials nominative determinism for her role as that heartbeat? I say yes. She is the steady, sustaining woman at the helm of a show.

Through our conversation, her booming laugh and as-if-it-were-yesterday recollections of past productions was a contagious joy. Brose has been a linchpin member of important plays and musicals in nearly every theater in San Diego. It is due to her leadership and artistry as a stage manager that these stories have touched audiences in exactly the way that they did.