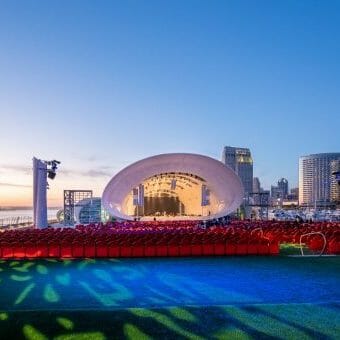 Buildings can change communities. I’ve seen it. Cultural powerhouses of the world like Paris, London, New York, Sydney, Mexico City, and many others; each have iconic buildings that define them and create a sense of belonging for locals and visitors alike.

I have always been a big fan of venues. Small and large venues; both empty and filled with life. My father is an architect, and my grandfather, Jose Luis Hernandez Mendoza was a famous Mexican architect who designed everything from universities and cathedrals, to private residences of the Mexican elite. For this reason, I have always had a deep respect for the transformation of spaces and how they can impact an entire community. But somewhere between the built environment and the actual coming-to-life of a venue, there is an undefined magic that every community hopes to achieve. It’s the kind of magic that happens when a building attracts community activity around it, even when the building itself is not in use. When it comes to creative spaces, the built environment can be either exclusive or welcoming. The San Diego Symphony is aiming for the latter.

The San Diego Symphony Orchestra Association announced today that “The Future Is Hear” – its $125 million comprehensive campaign – has surpassed the 75 percent milestone. The campaign now enters its public phase, allowing community members to be part of this transformational new arts/culture resource.

Scheduled to open to the public in summer 2021, The Rady Shell at Jacobs Park is the only permanent outdoor waterfront performance space on the West Coast, and the first permanent, year-round bayside concert venue in the nation that is operated by a symphony orchestra. Offering 360 degrees of year-round music, sky, and sea, The Rady Shell at Jacobs Park is an unprecedented resource for the Symphony’s expanded schedule of diverse outdoor concerts.

“I feel like I’m home. This city… even through this really crazy time, this city has embraced me. I’ve found friends, I’ve found a lot of support but more importantly, during the darkest time we have kept on dreaming together and dreaming really, really big” stated the San Diego Symphony’s Music Director, Rafael Payaré.

Payaré’s innate joie de vivre is evident no matter where he goes but somehow, through this process he seems to have discovered the meaning of life: staying inspired. For many of us, the pandemic exposed just how vital the arts are to our well-being. And no matter how choppy of a zoom ride it’s been with virtual arts events, people still turned to the arts to help get them through the stressors of the pandemic. We turned to cooking, poetry, picked up a new instrument, found artful ways to entertain our young children, and creative resources to lighten up the mood for our teenagers. We watched films together about a man’s friendship with an octopus because we thought that Hollywood wasn’t going to create anything new until this was all over. We cried together as artists around the world responded to social injustice in touching and meaningful ways. The arts matter. Artists are second responders and they saved us.

Now that we are seeing a bit of light at the end of the pandemic tunnel, we can finally take in the enormity of the accomplishment. From concept to completion, building the Rady Shell moved at lighting speed when you consider the dozens of permits required on local, state and federal levels to move the project forward. In five short years, they accomplished all of that, plus the majority of financing and build out, during a pandemic. Building a major iconic performing arts venue for San Diego required a bold effort by a passionate community of creatives, administrators, Symphony board members, government officials, Port of San Diego commissioners, volunteers, individual donors, and foundations.

“I think this is huge not only to the Symphony but really to the city overall. This is going to be a community gathering space and a space of celebration; yes for the Symphony, but for other groups that will also be utilizing it. It’s also huge for the region because you know, we’re kind of known as this beach city with the great weather and the biotech community but now this will elevate our world class orchestra, with a world class venue to celebrate it” stated Decker.

But their gift to the San Diego Symphony wasn’t the only impactful one made to San Diego creatives.

“We have two cycles per year of grant making. The first one was announced in March, and we are mid-cycle for the second one which will be announced in July. There were $28 million in grants awarded to the arts out of $78 million awarded overall. The arts were really important to Conrad, so that continues to be something that we focus on as well,” she continued. “These are the kinds of big projects that he wanted to be a part of, and this is no exception.”

Sitting in the audience of the Rady Shell and listening to live music, followed by hearty applause for the first time in over a year sent chills up my spine. It reminded me of how much our city’s arts sector deserves a meaningful comeback. Can you imagine this city roaring back to life with live music, dance, theatre, visual and culinary arts? I don’t mean returning to pre-pandemic programming, nor pre-pandemic arts funding, but something different; something truly impactful, bold, intentional and transformative.

This kind of bold action in support of the arts is what a major city like San Diego deserves but somehow our arts sector continues to struggle to see the kind of transformational funding that could elevate our reputation as a cultural destination, vs. just being seen as “that sleepy beach town south of L.A.” Even after everything we’ve been through this past year, this year’s budget at the City of San Diego maintains a 50% cut for funding for arts and culture, and the arts community is fighting back.

What if instead of cutting the arts budget, we doubled it? Tripled it? What if legislators from the County of San Diego, Port of San Diego, City of San Diego; as well as regional donors and foundations gathered to strategize and invest in creating the kind of cultural destination we want San Diego to be?

The passion for transforming the cultural fabric of San Diego by funding this venue, has bigger intentions according to Decker. “We’re really hoping that the Conrad Prebys Foundation can be an impetus for further giving in our region because we don’t have this really sophisticated “culture philanthropy” that you see on the East Coast or in the Midwest. We have incredible individual donors, but not as many institutional donors. So the fact that the [Conrad Prebys] foundation is on the scene here in San Diego is huge for our region and we just hope it inspires others to give more give more frequently to help us recover from this pandemic, and that’s the goal.”

The bigger question is how the Rady Shell will impact the community at large. Will it attract world-class performances and bring tourist dollars back to our city in a meaningful way? Will it be able to create a sense of belonging for San Diegans from all socioeconomic levels? Again and again, the Symphony has stated their commitment to that effort. What is needed now is a bit of magic to piece it all together.

The venue is not just designed as a performing arts space, but also as a community gathering place that will be available to the public 80% of the time. It has several smaller, more intimate performance areas, green areas to lounge in, kitchens and lots of potential. They are still working out the mechanics of its use by the public at large as they would likely need to subsidize the cost to make it affordable for everyone. For now, this majestic venue stands as a symbol of possibility and hope for the kind of cultural powerhouse San Diego wants to be.