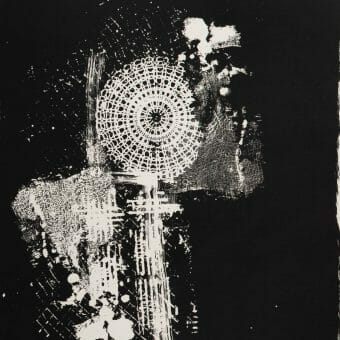 Many artists focus on mastering one medium throughout their art practices over their career lifetimes.

The digital exhibition Experiments on Stone at the Museum of Contemporary Art, San Diego takes visitors through the practices of four women artists who stepped out of their chosen mediums to experiment with lithographic prints at the Tamarind Lithography Workshop during the 1960’s.

Lithography is a two-dimensional ink printing method on stone or metal and at Tamarind, artists experimented and collaborated with several different printers in the process of creating their works on paper. Founded by artist June Wayne in 1960, Tamarind was to be a place to restore the art of lithography which had dwindled during the 1950s due to economic issues. In the first decade of the workshop over two hundred artists were invited to train in this method and work with master printers.  Many of them were women, and among them were well established twentieth century artists Annie Albers, Ruth Asawa, Gego and Louise Nevelson.

Curated by Alana Hernandez, this exhibition emphasizes the lesser studied parts of these artists’ practices, and while each of the four artists investigated using differing lithographic methods, the works reveal a consistency of the core ideas each spent their art practices creating.

While Albers and Asawa shared a foundation in weaving, Nevelson and Gego followed inquiries into the use of line to create architectural forms and building.  Albers was known for her use of vivid color relationships and patterning in weavings and textiles.  She found that prints not only allowed her to create thread forms in a painterly way that loosely resembled weaving, they also sometimes incorporated using acid to produce splotched and cloudy grounds.  The production of prints also gave Albers a practical way to show this two-dimensional work.

Asawa used ‘line’ or ‘thread’ by working with wire to create delicate weavings of three-dimensional sculptural shapes and installations referencing natural forms. Many are suspended from ceilings. Asawa attended Tamarind in 1965 where she developed over fifty prints from themes of abstractions, portraits and flower studies. Her figurative works are intimate renderings of friends and family – some are created with free-flowing sketchy lines while others use ink and washes using thick pulpy paper. In Desert Plant, Asawa used sacred radial geometry of the natural world in warm colors composed of forms resembling branches. This work highlighted her experimentation with both color and form.

Like Asawa, the artist Gego (born Gertrude Goldschmidt) used wire as her primary medium and also like Asawa, her practice focused on the ‘line’. In contrast, however, Gego used wire as a kind of drawing tool to create abstracted three-dimensional forms that reflected her background in architecture, making loosely formed grid-like structures that organically flowed in space. In her lithographs, in collaboration with several printers at Tamarind (in 1963, 1966), Gego explored the containment and expansiveness of two-dimensional space using drawn black thick and thin calligraphic lines, curvy and straight.

When Nevelson attended the Tamarind Workshop, she had not previously experimented with lithographs. She was known for her sculptures – monumental wood wall pieces and outdoor sculptures constructed from found objects and fragmented items that she re-visioned into new artwork. For most of her career she used line drawings as a tool to create her sculptural works, just as the other three artists in this exhibition had done. With lithographs, Nevelson produced prints that referenced similar themes to those in her sculptures. She would draw and build with the use of objects like erasers, lace, cheesecloth, and torn fabrics pressed into mostly black, and occasionally dark blue and brick-red ink and then applied directly on to stone. These experimental ideas were then translated to various papers into prints.

The digital exhibition displays seventy-eight prints which come from the museum’s collection, providing a snapshot of the Tamarind Workshop created during the 1960’s and to the prints by Albers, Asawa, Gego and Nevelson. Alongside these prints, viewers will see examples of their three-dimensional artworks coming from their primary art practices. Tamarind became a blueprint for new print shops with master printers that opened up in other locations and Tamarind itself moved to Albuquerque New Mexico in 1970 and remains affiliated with the University of New Mexico.

Experiments in Stone gives viewers a glimpse into four artists’ creative processes as they apply a willingness to make time from their established modes of art-making to experiment and ‘see what happens’.