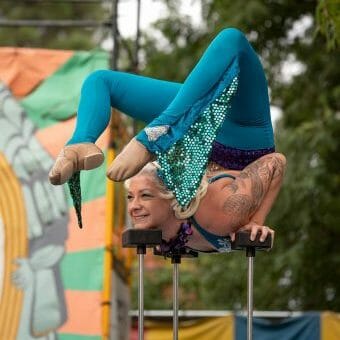 Fern Street Circus (FSC) made its grand debut in 1991 with a vision founded by John Highkin. He and Co-Founder, Cindy Zimmerman, would go on to pioneer the first social circus in San Diego.  Thirty years, and 32 original shows later, Fern Street Circus continues to thrive.

Just as Co-Founder and partner in life, Zimmerman told Highkin from the beginning, ‘you are going to need a parade’,  and that parade of support has been following them along ever since.

The history of FSC is one that was uniquely carved out by Highkin, stretching across continents. As one passion lead him to the next, he was inadvertently creating something special. Through all of the twists and turns on his path, Highkin never lost sight of his number one dream; bringing a circus to his hometown.

While earning his Masters at Cambridge, Highkin began to pull inspiration from German poet and playwright, Bertolt Brecht.  “He was always talking about essentially making theatre for working class people, and making theater that had a strong political purpose,” noted Zimmerman.

Returning home to San Diego in 1987, Highkin found himself inspired and in complete awe after watching Cirque du Soleil during their first American tour in Balboa Park. “I was hooked!” Highkin reminisced. “I was a daydreamer and I always envisioned a circus. I knew in that moment, that I wanted to bring that back home.”

The first Fern Street Circus show opened late September of 1991 in Golden Hill’s Grape Street Park. What began with musicians and performers grew to include additional circus acts and more complex storytelling. After the show, children would stay and ask to be taught circus skills. This began an organic relationship between the youth and Fern Street Circus performers. In 1993, FSC began its official After School Circus Program serving children of all ages and teaching them circus skills that would help empower their daily lives.

In 2015, FSC revived its board by inviting parents to join as board members. This approach created a stronger relationship with them and allowed them to become more involved in FSC’s decision-making. Committed to community involvement, two key principals Highkin remains dedicated to is that all FSC neighborhood shows should be free and second, that all of its professional artists and technicians should always be paid. This was a key factor in them hiring local, well known tattoo artist/street artist, Sergio Hernandez in creating artwork for their posters and in the designing of their new trailers. The challenges FSC faced in early 2020 due to covid-19 caused them to completely re-imagine how they would continue their public engagement.

Their biggest concern was being able to provide families hit the hardest during the pandemic with all of the resources they need to get by.  This evolved into a series of 39 pop up, socially-distanced performances at curbside meal distribution sites; sponsored in partnership with San Diego Unified School District’s Food and Nutrition Department and Episcopal Community Services. From May-November 2020, FSC provided uplifting, bilingual entertainment for families waiting in food pickup lines. They remain focused on providing artistic and educational programs in under-served mid-city neighborhoods.

Board President, City Heights activist, and mother of three students in the after-school program; Marcela Mercado, helps run the FSC after school program says, “John is always supporting parents, children and teachers. He is always thinking about how he can help support the community. It is grant season right now and he is constantly thinking of how to get funding for us. From the moment he goes to sleep to the moment he opens his eyes, he always thinking about the circus.” When asked what the future looks like for FSC Mercado says that they hope to secure a facility that can house 100-150 students at a time so that more children can join and learn. “I can see the confidence in my kids as they have learned circus skills and it is only bettering their relationships with each other, with us, and our circus family.”

As we approach the 30th anniversary of this resilient program I asked Highkin what advice he could give to the younger generation who want to start their own movement, “you have to be driven by an idea. My first idea was, ‘I want to start a circus in my park.’ Contact your community. Learn. Stay  committed to through the process and you remain driven. Be relentless.”

It took a dream and a dedicated vision to create Fern Street Circus. You can join the 30th anniversary celebration with John and Cindy and the FSC family on February 21, at 4:00p.m.

Fern Street Circus will host a “Fun-Raiser Fiesta” in  celebration of its 30th anniversary. This virtual event will feature performances by FSC professional artists and students from the after-school program, live music, interactive games, contests, clowns, and special guests. Tickets are $10 per family and $75 for the “Ringmaster” level. Sponsorship opportunities are also available.