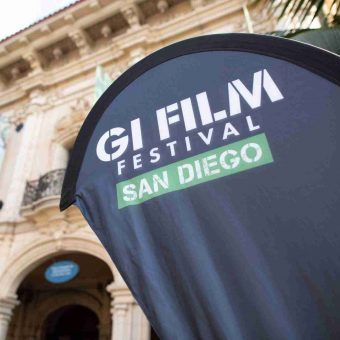 San Diego’s military bases make us a magnetic city for brilliant minds and brave souls. With over 100,000 active-duty members and nearly 250,000 veterans, we are home to the one of nation’s largest concentrations of military personnel. With more than one-in-ten San Diegans identifying as a present or past member of the military, the GI Film Festival San Diego (May 17-21, 2022) is an opportunity to learn more about our valiant neighbors and ourselves.

Since 2015, the festival has showcased films for, by, and about active duty military personnel as well as veterans. For the first time since 2019, the festival is set to return to in-person screenings. This year’s event features 27 films, including full-length documentaries, animated shorts, study projects, as well as local and international films whose subjects range from World War I to life as a military spouse.

Each year the line-up has grown in diversity, the 2022 festival includes “A Long March” shining a light on the treatment of Filipino American veterans, and the world premiere of “Walk with Frank,” documenting a Vietnam veteran who walked across New York in order to raise post-traumatic stress (PTS) awareness, while “Landing Home” discusses the often-difficult transition into civilian life.

For up-to-date information on this year’s film festival visit GIFilmFestivalSD.org.