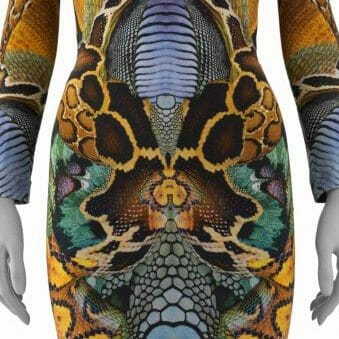 Lee Alexander McQueen, often called the ‘alchemist of fashion’, was trained from age 16 in the design and technical skills in creating clothing.  Between then and his tragic death in 2010 at the age of 41, his clothing and runway shows often reflected an aggressive and sexual style and in his own words wanting audiences to either feel ‘repulsed or exhilarated’. Whether his fashions expressed a classical style as when he was creative director at Givenchy or his runway show portraying women after rape, violence and domestic abuse, the quality of design and execution of the clothing was consistently impeccable.

In Lee Alexander McQueen: Mind, Mythos and Muse, LACMA curators Clarissa Esguerra and Michaela Hansen linked a connection between McQueen’s fashions alongside objects from LACMA’s large collection, drawing upon art history, culture and autobiographic moments from which McQueen drew inspiration. Sourced from the McQueen collection of Regina J. Drucker, the show is organized into four thematic sections. Mythos includes references to religion and mythology;  Fashion Narratives explores imagined worlds with collections rooted in romanticized historical references and McQueen’s personal history; Evolution and Existence examining his fascination with nature and life cycles, and Techniques and Innovation demonstrating his masterful design and dressmaking skills as well as his vast knowledge of costume history, and experimentation of digital technologies.

The exhibition includes 200 objects and over 70 designs by McQueen in conversation with examples of costume and textiles, decorative arts, paintings, sculptures, prints and photographs by 35 other artists mostly drawn from LACMA’s permanent collection. McQueen drew upon the Spanish bullfight, flamenco and the work of Francisco de Goya in “The Dance of the Twisted Bull” (Spring/Summer 2002), which portrayed bullfighting as a metaphor for life and death.

McQueen’s interpretation of distinctive kati rimo (brocade pattern) design, seen painted on a 17th century Tibetan trunk, in incorporated into pieces from this collection “Scanners”(Fall/Winter 2003-04), which illustrated an eastward migration across Siberia through Tibet and to Japan. Contemporary works include a 2010 monumental photograph of the ocean by Andreas Gursky paired with looks from Mc Queen’s collection “Plato’s Atlantis”(Spring/Summer 2010) exploring rising sea levels.

The exhibition design created by Michael Maltzan connects viewers with McQueen’s imagination and LACMA’s collection, facilitating an understanding of the artist’s vision. The design enhances open, multiple intersecting space through classical colonnade forms so that the fashions coexist with the objects of art from the selected museum objects. Viewers can move through the exhibition seamlessly while all the while observing the fashions of various spaces simultaneously at various angles and viewpoints.

This first exhibition of McQueen’s work on the west coast explores his imagination, artistic process, and innovation in fashion and art, and uncovers an understanding of his artistic legacy as well as linking his work to art history via LACMA’s fascinating collection. Now on view through October 9, 2022.