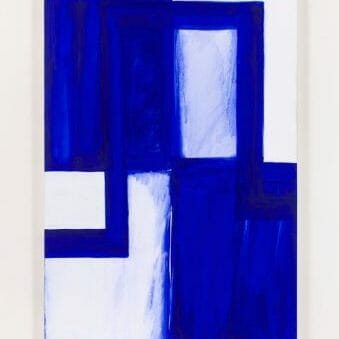 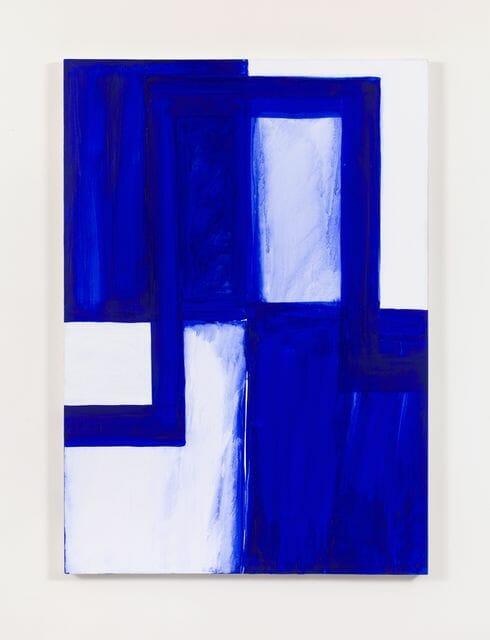 Selected paintings, ceramics and furniture representing several decades of Mary Heilmann’s practice grace expansive rooms of Hauser and Wirth, Los Angeles.  And while many artists either don’t name their works at all or if they do, do so as an after-thought, Heilmann’s titles are carefully created and intimately tied to the works – and are as poetic, musical and evocative as the works themselves. Neo Noir, Pro Tools Remix, Rio Nido, Last Dance Remix #2, Pink Ocean, The First Vent and Pal Joey are some of the titles that entertain, and amplify an already energizing display of visual candy giving viewers an added invitation to smile.  A child of the beat generation, her works are also influenced by the hippie generation and pop culture of the 1960’s, and the fashion, music, and cartoons of contemporary culture. Having grown up in California as a swimmer and surfer, and then living and working many years in New York, Heilmann’s art combines both ends of these life experiences and embody the development of her particular aesthetic.  Her compositions, though influenced by minimalism and geometric abstraction, are belied by the fuzzy, wobbly edges of many of the geometric shapes contained within her paintings.  Additionally, drips and drabs of paint that seem to be organically and spontaneously dropped in shapes and backgrounds, are left intact rather than “cleaned up” as other artists might have been driven to do.

Heilmann’s works are unpretentious and loosy-goosy compared to her artist counterparts who pay homage to the “straight lines” and pristine edges of geometric shapes often found in geometric abstraction. By studying her paintings carefully, the viewer finds paintings that are not composed intuitively, but rather are deliberate and focused constructions with close attention to space, scale, and shape.  Heilmann’s affinity to very bright colors – oranges, pinks, greens, blues and purples sometimes combine with shaped canvases.  Fan #7(1988) and Ray(2017), acrylics on canvas, are examples of these sculptural paintings.  Series #1(1984) and Series #2(1984), Hellfire Cup #1(1985) and Shadow Cup #2(1985) are ceramic red and black geometric dynamic sculptures that appear to have motion, and echo the geometric shapes seen within various paintings.  Also included in the exhibition are a combination of 8 multi-colored and solid colored chairs constructed from wood and some with polypropylene or nylon webbing allowing viewers an opportunity to sit and contemplate the works. Heilman makes creating paintings look fun and easy – and, as in most things that “look easy”, it isn’t. Memory Remix is an exhibition of composed orchestrations of color, shape and form with Heilmann as their conductor.

Acrylic and watercolour on canvas