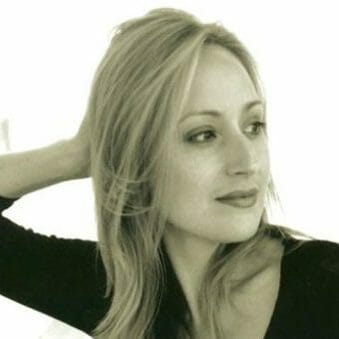 “Noura,” written by Heather Raffo” is currently in its West Coast premiere at the Old Globe from September 20-October 20.  Raffo, an Iraqi-American playwright, developed an earlier play, “9 Parts of Desire,” as part of The Old Globe and University of San Diego Shiley Graduate Theatre Program while doing her MFA at USD. Raffo has gone to on to co-found Noor Theatre in New York with Lameece Issaq, and to win numerous awards for her work, including the prestigious Helen Hayes Award for Outstanding Original New Play and the L. Arnold Weissberger New Play Award for “Noura.”  She spoke to Vanguard Culture in a phone interview.

For playwright Heather Raffo, debuting her new play, “Noura,” at San Diego’s Old Globe is a homecoming of sorts. Ten years ago, a play she developed while part of the Old Globe Theatre program, “9 Parts of Desire,” was staged by Mo’olelo Performing Arts Company at the 10th Avenue Theatre.

“I guess it is!” said Raffo, in a phone interview, “except I couldn’t attend the play (then) because I was accepting an award (at the Old Globe).”

“9 Parts of Desire,” based on interviews Raffo conducted with dozens of Iraqi women in Iraq during the 1990’s, received excellent reviews and went on to be staged in a number of countries, including Scotland. The Independent named it one of the five best plays of 2003.

And now, Raffo is back, for a West Coast premiere with a new full-fledged play, “Noura,” having played to enthusiastic houses in New York, Washington, D.C., and Abu Dhabi.

Like “9 Parts,” “Noura” is shaped from interviews and workshops in Arab-American communities and from Raffo’s own family experiences, said Raffo, whose father is an Iraqi Christian.

“Noura” follows a Christian (Chaldean) Iraqi family as they celebrate their first Christmas Eve as US citizens. Joining them are their young son, Yazen; a childhood friend, Rafa’a, a Moslem; and an Iraqi refugee student they are sponsoring, Maryam, who has quite a surprise to share. Noura, a known architect in her native Mosul, is mulling over her memories of an Iraq now in pieces and questioning her place as a newly minted American. Before the night is over, Noura’s questions about what is home and who are they in this new place will lead to some unexpected revelations.

“Noura,” loosely based on Ibsen’s, “The Dollhouse,” is Raffo’s way of working through identity, home, and belonging.

According to Raffo, until the first Gulf War, she wasn’t really that aware of herself as a Christian Iraqi-American. However, the war changed all that, and she started to see that she had a foot in two cultures. It is a feeling became even more acute during the second Gulf War.

To deal with this, Raffo said, she turned to play writing.

“There is a need for writing, a need for theatre (about Arab American culture),” said Raffo. “I am the bridge builder.”

Raffo is clearly excited about having the West Coast premiere of “Noura” in San Diego, home to one of the largest populations of Iraqis outside of Iraq. For Raffo, “Noura” is the bridge upon which she hopes Iraqi immigrants, Christian and Moslem, as well as their neighbors, will meet.

“I really hope a diverse population will come to the show and see it together,” Raffo said, “and I hope they will see themselves in the stories here,” she added.

Raffo, who has acted in and directed early stagings of the play, including its world premiere in Washington, D.C., will be mostly in the wings this time.

“It’s a lot of work to put a production together,” said Raffo. “I would have to learn a whole new footprint.”

As it is, Raffo is particularly pleased with this production’s cast. “Three out of the five are Middle Eastern (origin),” she said. “Some are Iraqi and one is even a former refugee.”

As Raffo points out, it’s about time US film, television, and theatre look to actors of Middle Eastern descent for parts like this.

“The tendency,” said Raffo, “(has been) to cast South East Asians” as Middle Eastern characters.

However, unlike many Hollywood productions, Raffo said she seeks to go beyond the dual stereotypes of Middle Eastern characters as either the victim or the enemy, but never as fully realized people. According to Raffo, the goal is for her characters to express a variety of emotions and selves. In particular, she is interested in what happens when the identity as an individual comes into conflict with the identity as part of a community.

The fact that “Noura” is being staged in a region with a large Chaldean refugee community, living in proximity to other Iraqi refugee communities, gives the play extra resonance, said Raffo.

“That Christians and Moslems were friends in Iraq, that people celebrated together, has been forgotten,” said Raffo, who says post-war sectarianism has by necessity fostered a selective amnesia. “(The friendship between Noura’s Christian family and their Moslem friend) is a way to keep that memory alive.”

The idea, says Raffo, is “to help people see each other as real people,” with hopes and aspirations, as well as fears of not having a place.

Although the play focuses on an Iraqi refugee family at Christmas, Raffo is confident that others will find Noura’s story resonates with their own lives in the now.

“Noura” continues through October 20th. There are a number of surround events, including a number of post show forums and subject matter talks.