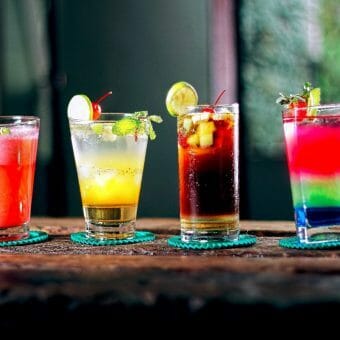 Many people, when they’re invited to a wedding wonder if there’s going to be an open bar. And hey, who am I to judge? I’m nothing, if not human.

So, imagine all the good parts of a wedding, with none of the bad parts. An open bar, attire that matches your comfort level, live music, food, and desserts. That’s what it was like to be at the 11th San Diego Spirits Festival.

Before we go any further, I must readily admit to all of you that I’m not a libation connoisseur or enthusiast. I rarely dabble or engage in imbibing. One time, while with friends I ordered an alcoholic drink (*gasp!*). They all thought it was a monumental moment, that a handful of them took their phones out to take a picture of me getting a drink. True story.

Nevertheless, I took one for the team and ventured into new territories in the pursuit of culture, journalism, and cultural journalism. Which is how I ended up at the 11th Annual San Diego Spirits Festival. What can I say, I’m the epitome of a team player. I’m also incredibly humble.

The two-day festival took place at the Port Pavilion on Broadway Pier, right next to the Midway Museum in Downtown San Diego.

Once inside the venue there was a myriad of spirits to select. Classics, like gin, rum, tequila, and whisky.

And while I have never really been one to have tequila, that’s probably because I hadn’t tried the right one. After Saturday, my perspective on that has changed.

I think, most people have experienced “tequila blanco,” which means it’s not aged in any way. The tequila is distilled and bottled almost immediately. Since the tequila is not aged, this is probably what gives it that distinct dry flavor and sharp after taste.

Then there’s “tequila reposado.” Reposado, is Spanish for resting, or at rest; so when a label says “tequila reposado” it means it was aged in barrels for a few months to under a year. The type of barrel used, varies by distillery. But that process of aging changes the profile and taste significantly.

The next step up, is “tequila añejo.” The word “añejo” is derived from the Spanish word “año,” which means year. So, when a label says, “tequila añejo,” it means that particular tequila was in barrel, for at least one year, and up to three years.

Finally, of the tequilas I tried, there was “extra añejo,” which means it was aged for over three years.

The longer a tequila ages in a barrel the darker it gets. But, what I wasn’t expecting was for each batch of the aged spirit to become smoother, have more distinct flavors and notes. While this might seem obvious to many, I am an untrained tester. So this was a revelation for me.

However, I seemed to like the “añejo” batches better than the “extra añejo” ones. Somehow, the extra years in a barrel didn’t appeal to my palate.

I also learned about spirits I didn’t even know existed, like pisco, which is a Perivuain and Chilean spirit made from grapes. It’s not wine, but it’s made in the wine regions of those neighboring countries.

Pisco can be used in lieu of vodka or gin in cocktails or other mixed drinks. I tried it, and the initial taste was a little too sharp for me. The aftertaste, however, was rather pleasant. The person next to me seemed to enjoy all of piscos notes and flavors.

Despite all of these interesting and flavorful spirits the thing that won me over was not a beverage. It was a macaron. I realize that’s slightly antithetical to the overall endeavor of a Spirits Festival, but I got to stay true to my sweet tooth.

Makers Mark teamed up with the local pastry/bakery Le Parfait Paris, and had them make macarons whose color scheme resembled a bottle of Makers Mark whisky. Complete with the red wax seal, except on the macaron it was white chocolate with red coloring.

After today, I feel I have a much better appreciation for certain types of spirits. I’ve always been the kind of person who’s been interested in the “how” (e.g., how something is made). But, this experience has been an interesting exercise in further developing my taste buds, vocabulary, and understanding for what’s possible. And my biggest takeaway is that you’ve got to look out for the spirit, and treat it right.

The festival runs through this Sunday. For more information and to purchase tickets visit: https://www.sandiegospiritsfestival.com/