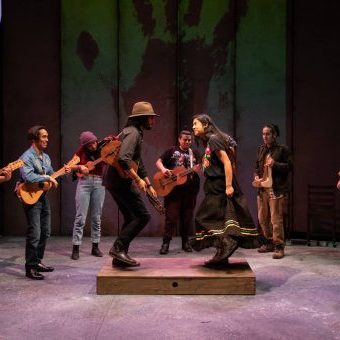 People swept up in the currents of world history is the connecting thread in the La Jolla Playhouse’s (LJP) recently announced 2022/23 season. It’s a theme that resonates with our era of global pandemics and racial justice reckoning.

We spoke with Gabriel Greene, Director of Artistic Development at LJP, about the upcoming season and the influences and themes it explores.

“We didn’t start out with an overarching theme of historical currents when we planned this season It’s actually after we selected the works, that we realized they all reflect people caught up in massive global moments just as we are swept up in ours. This new season explores how others have navigated those currents. The works are actually in conversation with each other.”

Two of LJP’s upcoming season’s plays are reclaimed from the “season that wasn’t” due to the pandemic shutdown. However, during that time, Greene reported that the playhouse produced more than a dozen digital WOW (without walls) productions online to keep their staff employed and their audiences engaged.  “It also produced some really beautiful work that was timelier and more responsive to what was happening in the world.”

“Theatre, by its nature, isn’t always able to be responsive to the moment, but this (Covid) allowed us to react and produce more quickly to help our audiences deal with isolation and anxiety as well as anger and hope in the face of the Black Lives Matter movement,” said Greene.

It also encouraged LJP to think more deeply about how they choose and produce new works to be more responsive and diverse. Said Greene: “We are dedicated to producing new works that provoke empathy and inclusiveness. The ultimate aim of creating meaningful art is that it allows us to reflect on our own and others’ experiences.”

And how are La Jolla Playhouse audiences reacting to the recent return to live theatre? Greene noted that “There’s a hunger of an audience to gather and consume a story together. With our current show —To the Yellow House — artists and audiences are returning to us perhaps for the first time since Covid. People are so grateful we are back. And so are we.”

From the Russian Revolution to Bohemian Paris of the twenties, this musical explores the life of artist Tamara de Lempicka who challenged the cultural, social, and political mores of her time. An energetic, pop-infused score pulses through this production that explores the political and personal upheaval of a woman caught between two worlds.

Here There Are Blueberries

Written by Tony Award nominee Moisés Kaufman and Amanda Gronich, conceived and directed by Moisés Kaufman, and produced in association with the Tectonic Theater Project.

The receipt of a cache of photographs at the U.S. Holocaust Museum unveils devastating documentation of Nazi behavior outside the walls of Auschwitz and brings one descendant in Germany to a reckoning with his family’s past.  This thoughtful drama will cause all of us to reflect on the meaning of humanity in the aftermath of the Holocaust.

Fandango for Butterflies (and Coyotes)

As Latin American immigrants gather for a fandango in New York City—a festive evening of music and dance– they reminisce about their immigrant journeys and about those left behind. Yet, this is also a night of a citywide ICE operation spurring new fears for those who sought refuge here.  Inspired by actual immigrant stories and filled with music, this is a joy-filled, yet heartfelt, story.

St. Petersburg, Russia after the collapse of the Soviet Union is the backdrop of this dark comedy. Two hapless government surveillance workers are suddenly faced with navigating life under glasnost, perestroika, and McDonalds!  How these barely competent spies cope with all these changes plus a love triangle, a Pop singer, mistaken identities, and the curse of freedom is rich fodder for this original play.

The popular WOW (Without Walls) live, outdoor performances will return to the Arts District at Liberty Station in Point Loma April 21-24, 2022. Next year’s Without Walls (WOW) Festival will feature four action-packed days of theatre, dance, and music, with multiple performances by acclaimed local, national, and international artists occurring simultaneously throughout the weekend. A complete roster of artists and projects will be announced soon!

Season Tickets for the 2022-2023 La Jolla Playhouse season will go on sale December 1st at www.lajollaplayhouse.org. In addition to the four announced plays, another new musical and a re-imagined classic are waiting in the wings to be announced soon.