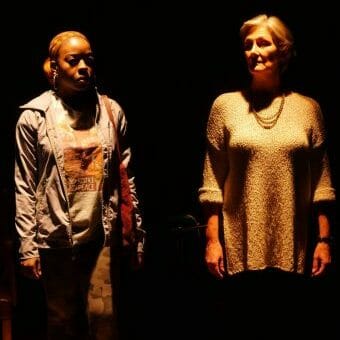 No one said history was easy. Or fair. Or wholly right. Or even told by the real voices who lived it. Add in race, and the mix can become as combustible as a mound of rice hulls sitting too long on a loading dock.

History, we are told, is written by the victor. However, as we know, a lot more people than the victor were there- and what of their voices?

Eleanor Burgess’ play, “The Niceties” currently on stage/on-line at Moxie Theatre, looks at all this and more. A thought-provoking, hard-hitting play, “The Niceties” is just the right show in these contentious and contending times to open Moxie’s 16th season. It’s a play bristling with frustrations, unheard hurts, and untold truths, and, oddly enough, feels like a metaphor for these socially distanced and heavily mediated days.

Even in the best of times, plays like this are a challenge. Bring in social distancing and Zoom, and the layers deepen, requiring delicate handling. But Moxie proves itself more than up to the task, creating a production that seems grounded and very intimate at the same time.

Inspired by an incident surrounding appropriation of other cultures/identities as Halloween costumes at her alma mater, Yale, Burgess has written a probing relevant play that takes a pointed look at race, privilege, and generational differences. History, as Burgess makes clear, is neither for the faint of heart nor the tender of soul.

Set in 2016, at a prestigious East Coast college, “The Niceties” focuses on Zoe Reed (beautifully played by Deja Fields), an African American Junior in History, and her middle-aged well-respected History professor Janine Bosko (the on point Mouchette van Helsdingen), who teaches the history of revolution. Zoe has come to Janine’s office to discuss her history paper- one that Janine feels has “potential,” but lacks background sources. The thesis: “A successful American revolution was only made possible because of slavery.”

The office hour starts off pleasantly enough, but soon turns into a tense struggle for validation, the battlefield, Zoe’s paper, the tinder, the rub of generational expectations, and the intruding pressures of the coming political storm.

Janine is blithely dismissive of Zoe’s premise, suggesting that she bolster it with primary sources. Zoe is frustrated with Janine’s suggestion that she look further than “the internet,” and seek the voices that she needs in the library, a place Zoe clearly mistrusts.

History, it seems, has come to an impasse. Janine, a leading expert on revolutions, sees the birth of the US as a modern wonder of the world, while Zoe, a rising scholar, sees it as a dark room from which the voices of the undervalued and dispossessed are begging for a hearing.

From there, things devolve, until, by the second act, they take a slightly unexpected turn.

Janine is a middle aged, feminist with decidedly liberal leanings (Zapata presides while she sips from her Hilary mug), eager to help a brilliant student rise to her potential. That, however, does not stop her underestimating Zoe or from condescendingly criticizing Zoe’s generation’s ability to think critically. Zoe, a student activist for social justice, for her part, underestimates Janine’s own struggles as a Lesbian in an Ivy League college, and bristles at what seems to be the older professor’s casual commentary and questionable racially tinged comments.

“I write down what I shouldn’t have to hear,” Zoe says of the lectures she attends, alluding to micro and open aggressions like Janine’s.

For Janine, Zoe’s sensitivity to the missing voices and implications of race in American history is troubling. She finds the focus on race “ugly,” “everyone is so tired of hearing about racism!”

And yet, for Zoe and her generation of African-American and Brown students, these are the very voices that speak to them as loudly if not louder than those of the known heroes of American history whose portraits hang behind Janine’s desk.

As the tone gets more acrimonious, Zoe and Janine become entrenched in the strengths and weaknesses of their respective generations. Janine extols building on research that has come before, Zoe, frustrated, blurts out that Janine is typically excluding those who could not leave records left behind.

And as the temperature rises in the room, Janine finds that her own voice will soon be leaving a mark since Zoe, thought to be fiddling with her phone, has been recording their meeting, and presses send as Janine lunges for her.

Quite the first act.

But it is the second act that is the most shocking. Zoe’s recording has gone viral in ways she could not imagine. Shocked, Zoe finds it and herself the subject of sharp debate. Janine, a veteran of such debates as one of the first women accepted into her department, finds herself trying to apologize to Zoe. For a fleeting moment, they both discover a bit of grace in the other’s position, but but there are hard truths for both to learn here: liberalism may save you, but the truth beneath the truth will set you free.

Indeed, hard truths that echo the discussions of today.

However, there are moments the play feels almost anachronistic. This is an odd conflict for two bright, passionate feminists- one that sounds more reminiscent of the 1980s pre-Howard Zinn’s “A People’s History of the United States” academia (1980), than 2016, when the call to heed the voices of those left out of the victor’s history was new and somewhat radical.  Nonetheless, it’s a powerful discussion that makes one wonder where we would be today, had we listened to those voices more carefully.

Moxie has come out swinging in this, its 16th season debut. The virtual zoom format is intimate and flexible with Moxie providing tantalizing clips from the documentary on the show and a robust, lively talk-back after.

Director Delicia Turner Sonnenberg has taken a play that demands balance even in less complicated times and made it sing in a carefully shot and choreographed production designed for virtual viewing. Julie Lorenz’s generously laid out set of Janine’s office that wears her politics on its walls, is the perfect backdrop for Burgess’ well-paced, high-energy dialog. And Turner Sonnenberg is particularly blessed with two fantastic actors who carry the show with grace, energy, and style. Both Deja Fields and Mouchette van Helsdingen are well-matched. Elegant and spare in their moves, they bring passion to their characters without over-powering the other with didactic delivery.

A strong season opener, “The Niceties” is a beautiful production whose questions will stay with you long after the Zoom has ended.