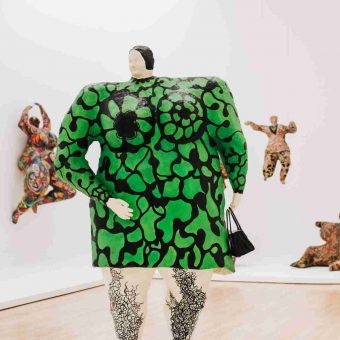 Amid the excitement around the $105 million expansion of the San Diego Museum of Contemporary Art’s La Jolla campus, there’s also the thrill of a major exhibition of works by Niki de Saint Phalle, the French American artist best known for her larger-than-life “Nanas” and other overscale sculptures that have won worldwide acclaim.

The exhibit, “Niki de Saint Phalle in the 1960s,” explores a ten-year period of the artist’s groundbreaking work, including her “Tirs,” or shooting paintings and the voluptuous, female-affirming Nanas.

The multiple media exhibition includes Saint Phalle’s paintings, assemblages, and sculptures as well as ephemera and extensive film and photographic documentation from the archives of the Niki Charitable Art Foundation in Santee and the Menil Collection in Houston. It includes many artworks from Europe that have never been seen in the U.S before as well as works from collectors nationally and globally.

In fact, the MCASD show is the second of only two venues planned for this remarkable period of Saint Phalle’s work. The exhibit is co-curated by the Menil Collection, Houston which hosted the first presentation. The co-curators of the show, MCASD Senior Curator Jill Dawsey and Menil Collection Senior Curator Michelle White, noted that many of the works are extremely fragile, which prohibited the opportunity for additional U.S. museum venues.

A DECADE OF CREATIVE DISRUPTION

Saint Phalle’s works of the 1960s reflect the profound political and cultural transformations of the era from the antiwar period to the feminist movement and the flourishing of pop culture.

Starting with the early 1960s, Saint Phalle shocked the art world with her Tirs, or “shooting paintings.” These shot-at assemblages were audacious experiments in performance and participatory art. The artist or viewers would shoot rifles at constructions of found objects that were embedded with bags of paint and other substances and covered in plaster. On impact, the paintings exploded with paint into uncontrolled imagery. The violence of many of these works reflected Saint Phalle’s rage at the male-dominated, war-worshiping culture of her time.  Saint Phalle explained that her intention was “to make a painting bleed.”

Co-curator Dawsey spoke about her excitement in gathering these powerful works: “Over half of the pieces came from European collections, and we negotiated these loans with European institutions and collectors over the course of three years. Saint Phallle’s Tirs are very fragile—she literally shot at them—and many in our show may never return to the U.S. We are especially thrilled to present them in our new MCASD home”

By 1963, Saint Phalle began turning her art from rage toward joy. She began to focus on the the female body and its empowerment. These artworks gave voice—and shape—to women even before the feminist movement took root. It also marked her transition from painting to sculpture as she developed ever more brilliantly abundant, joyful artworks that became the iconic Nanas.

Dawsey described the Nanas this way: “With their rambunctious life force, the Nanas became a vehicle for the artist’s exploration of women’s freedom and mobility in the public realm. Her trailblazing work presaged ideas and modes of making that would be elaborated by feminist artists in the 1970s and beyond.”

The “Niki de Saint Phalle in the 1960s” exhibition was years in the making. The exhibit was also, from the start, a joint venture with the Menil Collection in Houston. Dawsey and her Menil colleague White, researched and traveled to collectors starting in 2017. During the years of the pandemic, they also worked together on writing the book to accompany the show.

From the violent creativity of the Tirs paintings to the fantastical, abundant Nanas, “Niki de Saint Phalle in the 1960s” will have something for everyone.

Summing it up, Dawsey said, “Saint Phalle’s 1960s works contain both rage and joy. It’s all there for our visitors to discover and identify with.”

After experiencing the MCASD exhibit, Saint Phalle enthusiasts can find more of her works throughout our region.