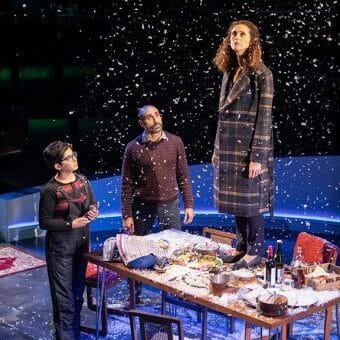 What does it means to lose yourself as you lose your home only to find your self in another? Which is the real you, which the refugee? Will you, can you, ever be whole again?

These are the questions that sit like an aquifer under Heather Raffo’s new play, “Noura” now in its West Coast Premiere at the Old Globe.

Raffo, an Iraqi-American playwright (her father is Iraqi from Mosul, her mother, American) has loosely hung her play on the frame of Ibsen’s “The Dollhouse,” but it’s a structure that is an unnecessary “Western” reference. Raffo’s play stands on its own, a tender, frank, and fierce look at the other side of the American experience in Iraq- who are you when you live in the country that has left your homeland in irreparable shreds.

It’s Christmas Eve and the three are celebrating the arrival of their new American passports and the impeding birth of the Christ Child – a Middle Easterner like they, as Noura (Lameece Issaq) reminds Yazen.

Tareq has Americanized their names, a gesture to the present- Tareq is now Tim and Yazen, Alex, as American as his play station. They speak English at home so that Yazen/Alex can grow up like his friends.

Noura has been Americanized to “Nora” and that missing “U” it turns out, opens wide a door to nostalgia, survivor’s guilt, longing, and the question of who and what is home.

Unlike Tareq, Noura hovers, suspended between the nostalgia for the expansive society of the Iraq of her youth in Mosul, and the harsh reality of living as a refugee in another country listening to daily reports of car bombings and sectarian violence back home.

Andromache Chalfant’s clever low-walled apartment in the round is just perfect for this Christmas Eve in which stories told take a circular shape and secrets come full circle.  Chalfant furnishes the apartment with an astonishing attention to cultural detail. Little touches like a large coffee table book about the late Iraqi architect extraordinaire, Zaha Hadid, underlines Noura’s personal project- designing a traditional Iraqi house to reconstruct a far-flung family.

And what is absent is also important. Tareq, resolutely facing the present, wants another child. Noura, still trying to reconcile her past, has yet to buy a couch and piles her books and projects everywhere.

Chalfant suspends the Christmas tree upside down, glittering like a barely out of reach jewel, and it presides over the Christmas Eve festivities like an avantgarde installation or a benevolent sword of Damascus bathed by Dirscoll Otto’s evocative lighting.  Under it, Noura marshals Chaldean traditions, fasting until midnight, as well as guests, and ultimately, secrets that must be spoken.

Johanna McKeon’s judicious directing brings out the warmth and full-bodied relationship between Noura and Tareq as he tries to cajole her into having another child now that they are safe.

But Noura, perhaps in reaction to that missing “U,” is caught between their new life and figuring how to keep their Chaldean heritage alive. She redresses Yazen for his school Christmas play in traditional clothing (“this isn’t a Disney movie”) and spends hours preparing a huge Moslawi dinner they’ll eat after they break their fast. (“Mom, nobody fasts- try to be more American!”).

On this night, holy to both Christians and Moslems, they’re joined by childhood friend, Rafa’a, a Moslem also from Mosul, now an obstetrician. It’s moments like these when Raffo’s dialog gains a deepening power- one has the feeling of listening in as Noura, Tareq, and Rafa’a reminisce about how Christians, Muslims and Jews used to live together in Iraq, and frankly discuss the current situation. These are no palely loitering victims, but full-bodied personalities and their concerns about Iraq, in shreds after the US invasion and occupation is palpable.

“Now,” says Rafa’a, “I never thought I would be so lonely. It’s the hardest thing about being here.”

Melanie Chen Cole’s haunting sound design, including voices that seem to seep out of Noura’s memories, soon presages an additional guest.  Noura has invited Maryam (Isra Elsalihie), an orphan girl from Mosul, raised by nuns. Sponsored by Noura and Tareq, Maryam is now a promising physics student at Stanford. When she drops by earlier than expected, pragmatic and pregnant, Noura finds out she is not the cute, cuddly stand-in for a daughter she had hoped for. Where Noura strives to keep her composure (“Maryam, what happened?”), Maryam is cool. The Mosul Noura dreams about is no more, Maryam tells her, and the orphan wants the baby, something for her own.

“Look,” says Maryam. “I was there when the neighbors burned down the convent and murdered the Mother Superior.”

No wonder she is so resolutely practical about everything, including her up-coming job with the Department of Defense.

Maryam’s arrival sends the play out into even deeper waters. Talking to Rafa’a later, Noura can’t believe how “American” Maryam has become- and worries what to tell Tareq.

For Rafa’a, who has seen a thing or two, an unwed mother is no big deal.

“What’s more Christmassy than welcoming a pregnant woman who has nowhere else to go?”

Christmas goes into full swing with the surprising but fun audio drop, “Laylet ‘Eid (Jingle Bells)” from Lebanese singer, Fairouz and comes to a grinding halt when Maryam walks in.

From that moment on, secrets and expectations come tumbling out. Tareq stunned by Maryam’s pregnancy (“that’s the girl we saved from Isis?”) shames her and later when Noura defends her, his lingering resentment towards Noura comes to the fore (“You wanted to leave Iraq, I didn’t.”).  Rafa’a makes a desperate declaration of love for Noura, before charging out into the cold. “Truth is a pathless land,” says Rafa’a, “silence burns the soul.”

Christmas Eve cracks the family open and the love Noura has for the Iraq of 3,000 years of human history, the guilt over leaving, the decisions she has had to make, the ruin the country has become come tumbling out in somewhat overladen monologues.

By the end, Noura will make one surprising confession, giving way to the hope that this Christmas will be the Christmas of new beginnings.

Raffo’s play exudes an astonishing power with deeply intimate moments. There is something incandescent about the show and the staging, despite some of the issues with the overlong text in the second half. The way Noura, Tareq, and Rafa’a interact with each other feels warm and real-the trio are exactly what Raffo has set out to do, fleshed out Arab-American characters who are neither victims of their times nor two-dimensional terrorist. Thanks to Mckeon’s deft directing, this is probably one of the most connected set of characters you will see this season.

Raffo is blessed with a clearly gifted cast, most of whom are of Arab origin, including some who are Iraqi. Lameece Issaq is beautifully intense as Noura, and her ability to keep Noura’s confessional monologues, burning with passion and guilt about leaving Iraq (“they only let us in because we’re Christian”) focused is amazing. Mattico David brings a deep warmth and compassion to Tareq, an interesting casting choice since he played Rafa’a in previous productions.  Fajer Kaisi is likewise excellent as Rafa’a, delivering some of the most searing lines of the show. Isra Elsalihie is fiercely present as a stand-in for the new Iraq while Giovanni Cozic is adorable as the tween negotiating expectations.

“Noura” is not an easy play, but it is one that lays bare its heart with a disarming tenderness that stays with you long after the last lines are said.

“Noura” continues at the Old Globe through October 20, 2019. There is a post forum Tuesday, Oct, 8 and Wednesday, October 16. Please see the Old Globe for more information about tickets and showtimes.