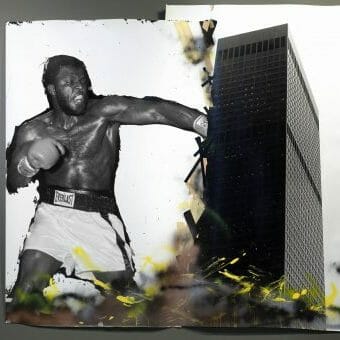 The Getty Unshuttered is a free photosharing app directed toward building a positive community for teens to develop and express their own visual language. What better way to motivate budding photographers than to experience the recently opened exhibition at the Getty Center’s photography gallery Photo Flux: Unshuttering LA. Independent curator Jill Moniz who launched the show is the first black woman to have guest curated a show at the Getty which highlights 35 acclaimed artists of color. Since 2017, Moniz has also showcased the work of young photographers to engage and encourage them in ways to re-imagine their communities, to inspire one other and promote social justice advocacy.

Through the medium of photography Photo Flux: Unshuttering LA educates viewers young and old with the history of race seen through the eyes of Black, Hispanic and Asian American artists.  Often noted as ‘transformative photography’ these powerful images portray both the violent and the sublime in our culture past and present in the treatment of people of color. Artist Todd Gray whose photograph Support Systems (1984) is the featured image of the show depicting a large black and white set of 2 photos taped together and spray painted. The image, a strong black boxer hitting a tall city building is interpreted as a metaphor of black men fighting capitalism, white supremacy and asserting black identity. This was one of a series of images Gray hung around Exposition Park during the 1984 LA Olympics, taking the photographs out of the context of a museum to share with greater impact to the broader community.

Photographer Tony Gleaton was known for his African influence in the American West, in documenting Native American ranch hands and in following the African Diaspora and black slave trade routes. Gleaton toured Central and South America photographing descendants of slaves. Usually observed and represented as passive objects in photographs, Gleaton’s models in contrast, look directly into the camera gaining an intimacy with the viewer, emphasizing the model as active participant in creating the photos. Gleaton’s subjects were people mainly considered invisible to society, poor and out of the mainstream. He wanted to create beautiful portraits, images captured with honor and respect.

Another work in the gallery is a large blue cyanotype of an undersea composition by mixed media conceptual artist Andrea Chung, who is of both Chinese and Jamaican dissent. Her beautiful and peaceful underwater seascape is the result of her research of the transatlantic slave trade of Africans brought to the ‘new world’ mostly to the Caribbean Island nations and paying homage to the many lives lost in the middle of the ocean journey to America.

Gordon (2016), an 8 foot tall chromogenic print by Ken Gonzales-Day, whose work has focused on racialized violence, is a portrait of a young Latino man casually posed, hands in pockets and dressed in a sleeveless white t-shirt. The large scale format together with the man’s eyes staring into the eyes of the viewer presents a complex and intense expression. This image was part of Gonzales-Day’s portrait series Memento Mori where he would tell his models about lynchings that took place in California after which he would count to three and then take their pictures. The results were emotional portrayals of young men, not the stereotypical threats to the world who are often profiled, and as are often viewed by the general public.

Two circular photos by artist Carrie Mae Weems portray young black girls wearing dresses with flowers in their hair posed reclining in the grass. Weems positioned these girls in ways reminiscent of the work of white master painters like Monet or Manet, challenging viewers to see the beauty and grace of these girls as they would have seen other subjects. Rather than presenting black people as tools of labor and property, they are seen as any other white photo subjects.

Photo Flux: Unshuttering LA spotlights the importance of transformative photography – how a particular photographic visual language can influence us in powerful ways and to build awareness of our own personal stereotypes.  It also sensitizes us to think deeply about how we view people of color, class structures, our culture and how history has influenced our thinking.