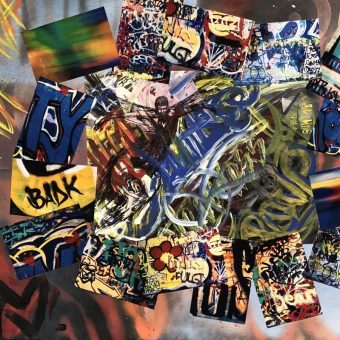 Since 2013, Project PAINT has been using art as a means of rehabilitation for incarcerated individuals at the Richard J. Donovan Correctional Facility in south San Diego. The latest exhibit to evolve from the program, Inside/Outside, is currently on display at the Art Produce Gallery in North Park and highlights recent pieces created from collaborations between artists inside and outside of the confinements of prison walls.

Collaborative art, in essence, is difficult on its own. Inside/Outside is what results when the artists’ only form of communication is through writing and the art itself. “How do you create a social practice program with people who have been removed from society?” posed Kathleen Mitchell, the lead teaching artist for Project PAINT.

“[I] wanted them to connect with outside artists” commented Mitchell about their current project.

Each piece featured in Inside/Outside began with a concept by an outside artist, which was then relayed to an inside artist to think about. One featured professional artist noted he tasked his inside partner with the notion of Manifest Destiny. From there, the pieces were completed through serial back-and-forths between the pairs of artists.

Mitchell observed the inside artists were initially intimidated and believed they were unworthy of participating in the program. With Project PAINT, inmates are encouraged to utilize creative instincts they may not normally tap into within the prison setting. Involvement in the program, particularly Inside/Outside, forced them to be more comfortable sharing their artwork.

When founder Laura Pecenco presented the idea for Project PAINT, Mitchell quickly volunteered to take part. As of today, the organization’s staff consists of 10 professional artists and offers a variety of art classes at Donovan on a weekly basis.

Robin McNulty, another instructor for Project PAINT, affirmed the environment they create is much more of a classroom-studio, like you would see in any art school, than one of a prison.

Project PAINT is not just about communicating through the barriers of prison walls but also breaking down the racial barriers within the prison itself. “Out in the yard, people divide racially but when they come into class, all of those boundaries are dropped,” regarded Mitchell.

Inside/Outside will be running now through May 18. This Saturday, May 11, members of the public are encouraged to join in on Project PAINT during the North Park Festival of Arts.