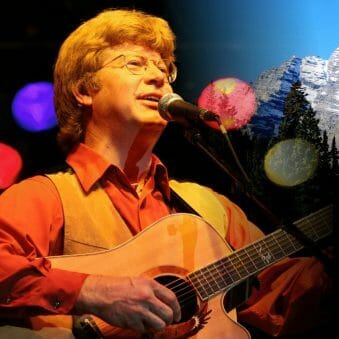 During the 1970s, the persona of John Denver evolved into one synonymous with camaraderie and environmental activism. His music remains a reminder to care for one another and the world we inhabit. Even from the first line of “Take Me Home Country Roads”, his kind and pleasant voice instantly carries you to a place where you belong, no matter how far from home you actually are.

For the past 18 years, Jim Curry has made a name for himself as a prolific musician in his own right by playing tribute shows to the late great Denver. Accompanied by his wife, Anne, Diane Ireland and Chris Wills, on May 6 and 7, he will be taking the stage of North Coast Repertory Theatre. In fact, this is his third year returning to Solana Beach.

In speaking with Curry, “Take Me Home Country Roads” became our first point of discussion. Listeners can find “[a] common ground,” Curry commented as to why this essential hit provides a long-standing sense of warmth and comfort. “[It’s] not so much about West Virginia but those feelings of home and those nostalgic feelings of where you grew up.”

Denver maintained a “country, homegrown innocence” that is signature to his work. However, it is difficult to pinpoint him into a singular mold. Similar in effect on pop culture, what Elvis engineered in the 50s and the Beatles in the 60s, John Denver achieved in the 70s. Even when the artist shifted styles, from folk to country to psych and back to folk again, “his personality was fairly consistent.”

Since he began performing his tribute act, Jim Curry has connected with many of Denver’s past bandmates. These collaborations have gifted him with direct insight into Denver’s own life and experience. Despite his pop music success, John Denver stayed down-to-earth and felt most at ease while out in nature. It’s true, when you listen to a John Denver song, it feels like a conversation with an old friend and a hug of reassurance that home is where the heart is.

Denver “had a knack for understanding humanity.” The singer’s authentic demeanor and compassionate spirit carries on by the timelessness of his words and melodies. “He spoke his mind but he spoke it with a very positive hope and uplifting messages.” This sanguinity parallels Curry’s own approach to life as well as shapes the intended outcome of his show.

From chart toppers “Rocky Mountain High” and “Thank God I’m a Country Boy” to a cover of “Let it Be” and an entire catalog of over 290 songs to choose from, Curry aims to “give [the audience] a full depiction of the diversity of [Denver’s] music.”

Many of our old musical heroes have physically died but their songs are as popular as ever. Curry has observed a broader mix of ages coming to his show. The messages behind even some of Denver’s earliest music are “amazingly poignant still,” affirms Curry. “People may be hesitant to come because they see it as an impersonator not a tribute.” He promises this is not a cheesy impersonation but a true testament to and simon-pure expression of admiration for the singer.

Albeit, we sadly lost Denver in 1997, but through old records and performances by passionate individuals, like Mr. Curry, the message of Denver’s music and the legacy of his character lives on.

To purchase tickets for either of the performance dates, please visit https://northcoastrep.org/variety_night/john-denver-tribute/.